Sockeye: Variations on a Theme

The infamous Sockeye Jacket is perhaps something of a conversation piece, but I do enjoy it. Granted, it's not the easiest thing to trot out of the closet, and it's season is pretty short, so yesterday I went out of my way to give this beauty it's second spin. 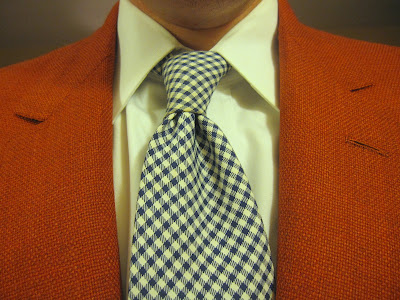 Funny, but khaki and white with a touch of navy seem to be just the thing to bring this shade of orange alive, while at the same time, oddly, keeping it under control. Last time out, it was cotton khakis and a white tennis shirt, with a navy and white gingham square. This time, we saw a slightly more formal variation on the same theme, with Italian tan gabardines for the pants, a crisp white point collar Brooks Brothers shirt, and the navy and white gingham shrunken, in neck tie form. Perfect for a Sunday afternoon, a dry 80 degrees. 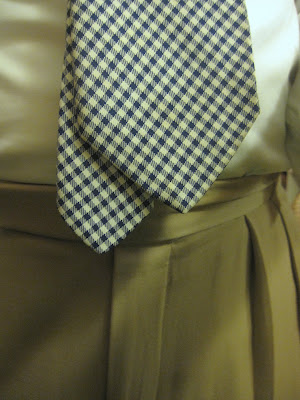 I swear, tying the tie with the back blade a little longer was completely accidental. Leaving it that way was entirely intentional. Don't forget, I am Italian, after all. 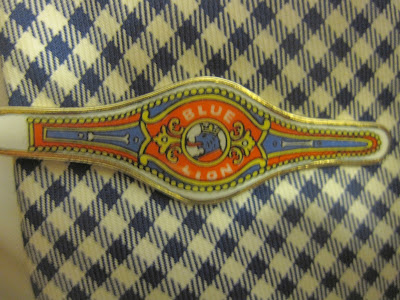 My Dad bought this enamel tie clip, modelled after a cigar band, at Kennedy's in 1968. It's way cool, and I love having it, even if I hardly wear it. This orange and blue outfit practically begged for it. 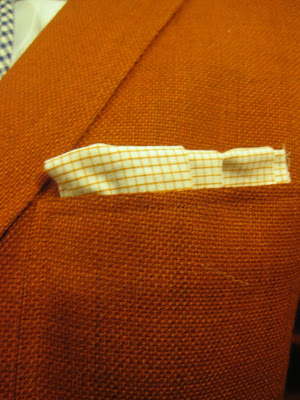 Finished with the latest addition to my collection of pocket squares-reclaimed-from-worn-out-shirts. I gotta tell you, I'm really glad to have thought of slicing a 16 inch square out of the back of my old shirts. Jaunty.

You're breaking the "no same patterns of the same scale" rule -- double whammy that they're both small. They are separated by space and solids, but I can't really judge whether the rule-break works because you only offered a sliver of the tie with the square, and didn't present a wider shot. I may have gone with a different pattern on the square, maybe a larger scale polka dot or stripes, or a larger check. However, I also don't really like how the light color of the tie has little contrast with the shirt. Too washed out for me. Solid navy tie would have been an option -- with the chosen square.

You are amazing, a guru of fashion. Who else would have come up with using a shirt for a cotton pocket square. My compliments!

All of this works: you have exceptional style and those tan gab trousers look really well made too ( is that a side tab?)

Seriously? And someone who is willing to call themselves "Young Fogey"? Thank God I am a Londoner. Try wearing this stuff around our town.

A lot of wacky threads had their genesis on King's Road, too.

I like the tie pretty much. Wish I would find something like this. Great attire! Even if the pocket square seems to fizzle.

Like my son, I was born old--why not admit it?

Or does fogey have a meaning other than "old-fashioned old man" in Brit-land?

The tie clip is incredible!