Weddings in the Sun

Early tomorrow morning, I'll be heading North to the coast of Maine for a good friends wedding. Of course, I feel compelled to tell you what I'll be wearing.

Summer weddings are fun, though dressing for them can be tricky. For a guy, wearing a suit and tie in the heat is mostly an uncomfortable prospect. But that shouldn't stop you. I see it as an opportunity to to pull off one of the Summer looks I love so much but rarely get to utilize, given that we live in a time when casualness is king, and Summer specific dress clothing, for men at least, is practically becoming archaic. Still... 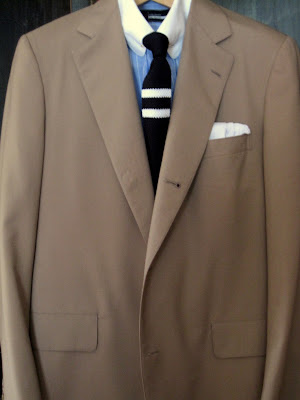 A tan Brooks Brothers suit, lightweight wool, vintage 1980s, Brooks Brothers second heyday, as it were.I love this suit, but seriously, when am I gonna wear it? I thought about the old poplin number, but it just seemed to casual for the event. All cotton and wrinkled would be fine, but the dacron blend left me short. Paired with a made to measure shirt and a killing knit tie I picked up the other day. More on the tie later.

By the way, check the perfect soft roll on that lapel. One more feather in Mr. Lee's cap. I dropped this suit off for dry cleaning last week, and the following conversation took place:

Me: When you press the jacket, just make sure you...

Me: Right it's just that at some places when I bring these jackets...

Mr. Lee: Some places, not here.

I think I might have insulted him a little bit. Sorry, Mr. Lee, I didn't mean it. 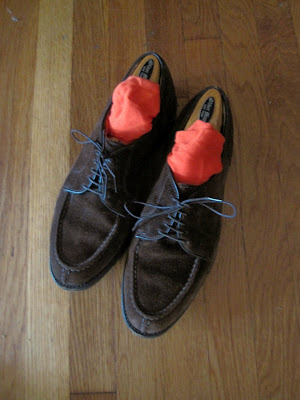 Allen Edmonds Bradleys, in dark brown suede, and orange socks, you know, just because I'm like that. You didn't really think I could leave the whole outfit understated, did you now? Besides, a splash of color never killed anybody. 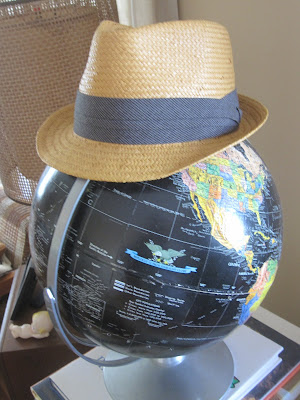 I had been poking around looking for a straw hat to really nail this ensemble down, but to no avail. I found some good ones, but they were all really expensive. I found some white ones, but I really wanted natural straw. Now I know that a good hat is a fine thing to invest real money in, but I don't have real money, so I dropped the idea. Then divine providence sends this little number my way. (tangent: ever seen a globe with the oceans in black? A fine piece of thrift store decor, courtesy of Mrs. G., it makes an eye catching accessory in it's understated weirdness.) 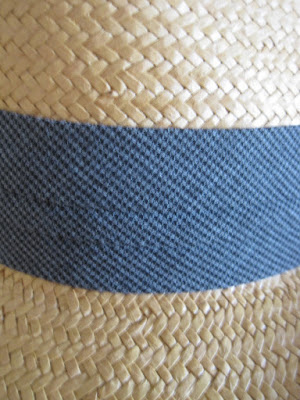 This is just what I wanted. The band in grey and black mini houndstooth cotton is just jaunty enough. 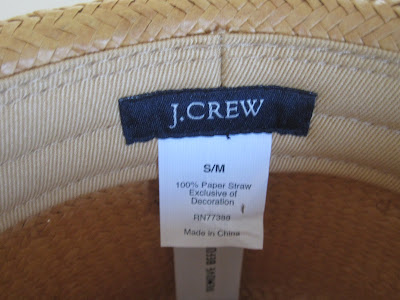 J.Crew!?! Made in China!?!. Yes it's true, even yours truly winds up in these unsavory shops from time to time. That's what I meant by divine providence. You see, it was overcast and threatening of heavy rain all day yesterday. In order to break the boredom of a day spent entirely in the house, I took the kids to the (gasp!) mall. We had a good time, cheeseburgers for lunch and a trip to the Lego store. As we walked past J.Crew, I felt the urge to check it out, and lo and behold, this hat. I think given my tastes and the way I generally shop, I can forgive myself throwing an occasional few bucks at the corporate giants...especially when they actually have what I want, which is rare at best.

My search for a straw hat also led me to the tie. Last week, I took the kids into the city with me and forced them to shop for hats. Well, that's not all we did, we also spent a good few hours in the Frog Pond and at the playground beside it, followed by cookies and commuter train watching at South Station. Anyway, I checked out the local hat shop...no dice. Then I checked out this pimp store in Downtown Crossing. I don't know the name, but it's the kind of place that sells mustard yellow suits with knee length eight button jackets, and the like. They actually had a lot of good looking hats, but too pricey. On a whim, I decided to check out Macy's across the street. In a messy bin of ties marked 65%off, I found this one. 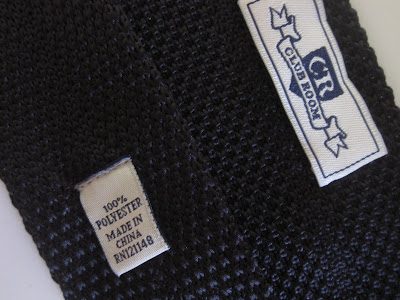 Made from (gasp!) polyester in (gasp!) China, I almost left it behind based on those two points. Who knows, maybe I should have. But I really liked it, and you gotta admit, it does kinda make the outfit. Having good taste means knowing good things. Having style means knowing when its alright to favor your gut over the rules. My point is, everything doesn't need to be top shelf all of the time, so long as you strut it with confidence, and sometimes, the result can be greater than the mere sum of its parts.

Damn, I did get a bit long winded there, no? Anyway, tomorrow I go off the grid for a few days. Feel free to comment, but don't expect an update for a few days. Do, however, check back early next week for a continuation of my narcissistic drivel, and hopefully a few good anecdotes from a weekend spent in the North Country.
Posted by Giuseppe at 8:45 AM

The suit is perfect....however I think the shirt is a mistake...a brightly colored rep stripe tie and a white shirt would look better....or a madras tie with white shirt...I am sure I recall seeing a madras tie in one of your posts. Suede shoes in Summer with a Summer weight suit...also a blunder imho. Go with a oxblood tassel...Just my 2 cents.
An August wedding in Maine sounds like a great time regrdless of your ensemble and I hope you have a blast.

I sympathize with your feelings towards J.Crew and polyester ties. Of course I also have the same hat (with a blue chambray band) and two of those club room ties (in green and with pink and blue stripes). You are right, the ethic may not be there, but I'll be damned if they don't serve their purpose well.

You are going to be the best-dressed guest at the wedding.

Unfortunately (?) for me, I'm past the age for friend's weddings, so now I have to wait for my children, my nieces, and friends' children. The worst part is that this seriously reduces my opportunities to wear the spectators I just picked up. Two pairs: one in black and cream, and the other in brown and cream. Did I mention that the cream parts are fabric? Did I mention they cost me $20, with tax? I can't wait to try them out.

I hope my wife will agree to be seen in public with me when I wear them....

Have a great time!

That tie was probably hand carved from a solid block of polyester by an artisan using ancient chinese tie whittling skills passed down from generation to generation since the dawn of time, or at least the dawn of plastic. So I think you made the right call.

The matching white contrast collar of the shirt and the white stripes on the knit tie...on purpose or totally on accident?
Either way, it brings an interesting aspect to the outfit. That, and the orange socks.
Have fun at the wedding! Keep killin it!

Nah, don't wear a white shirt with a tie to a wedding. If you take the coat off you'll look like the wait staff.

I picked up two of those Macy's tie's last month on super sale. They had a bunch of nice patterns at thrift store prices.

Admittedly, I bought two of those Club Room knit ties.

Nice post Sir. Your comment on the Frog pond and commuter trains made me family-sick. My 3 girls are all back in your neck of the country (2.5 weeks) visiting her family in the north shore area and New Hampshire. I miss (terribly) being there with them (work commitments), and walking about the Commons (donated by one of my relatives to the fine city many many years ago), Duck pond, Duck sculptures, and visiting the Granary burying ground, paying my respects, and getting a piece of pie with extra sauce at Regina's. I hope the Wedding was fun for you and yours!

I came across a pair of suede Bradley's in my size, including my seldom seen narrow width (B). However, the thrift pricer apparently had heard of AE, so he slapped a--get this--$99 price on them. Now you could never get that for used AEs on ebay, particularly in that width. Pardon today's thrift pricing gripe.