Two editions of my infrequent music post series "the Jams" in the same week, let alone the same month, is and unprecendented occurance here at An Affordable Wardrobe. However, after having spent most of the day digging out form under two feet of snow, I felt a little Winter Warmer was in order. Fear not, there's a good enough dose of clothing geekery to keep you satisfied. Besides, I need to move those photos of me in my bedclothes down from the top of the page. 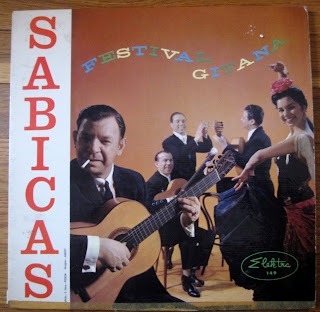 Sabicas, "Festival Gitana" is a ripping Flamenco record by a true master of his craft. Augustin Castellon Campos, born in 1912, revolutionized the world of Flamenco guitar. Known as Sabicas, a nickname he acquired at the tender age of ten, shortened from "El Nino de las Habicas"( the "Broad bean Kid", for his love of that certain legume), Castellon is widely regarded as a seminal figure in the world of gypsy derived Spanish music. For more on him that I could ever tell you, see here.Mrs. G. picked this one up at a thrift for 99 cents, probably because the cover looked good, but what a find.  Neither of us had heard of this great talent, but I'm glad this platter made it's way into my home. I only wish we had more of his work, and maybe someday, if I'm lucky, we will, on vinyl of course. Don't forget, discovery of the great things you never heard of is a happy side effect of thrift shopping.

Just in case you forgot, Spain owns, and I mean owns,  the rights to the guitar.

Turns out, our man Sabicas was a stylish fellow, too. If the guitar and striped suit in the vintage 1930s footage weren't enough to convince you, have a good close look at his shirt: 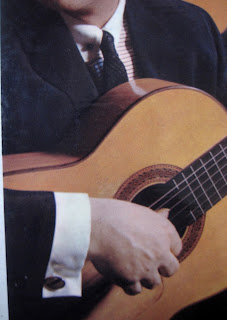 Pink, with black horizontal pencil stripes, contrast French cuffs, and a pinned contrast club collar (and you thought Flusser  and ADG came up with this stuff...pooh pooh). Worn with a black knit tie and black suit, the look is nothing short of murderous.

So, when the snow piles high and the temperatures run low, dig some gypsy Flamenco. 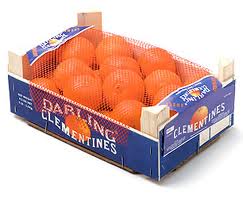 A crate of Spanish clementines doesn't hurt either. The kids and I have been going through at least a crate a week lately.

From the frozen Northeast, I wish you all the warmth in the world.
Posted by Giuseppe at 8:59 PM

In the early 1960s, when I was at college, Carlos Montoya was the man who popularized flamenco guitar, but Sabicas was the man whose LPs the aficionados listened to.

That's funny, my kids have been tearing through citrus fruits (clementines, mandarins, satsumas) for the last few weeks. It must be something about winter.