The turtleneck sweater is a tricky beast, but this year I found myself convinced it was a must-have. After a fair amount of searching, I opted for this number: 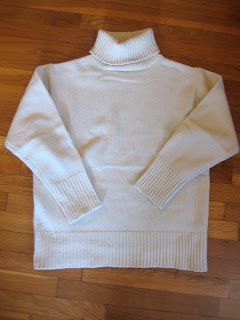 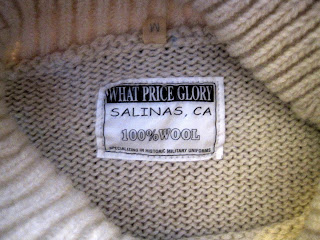 from What Price Glory, a company I've mentioned before. Specializing in British WWII gear, based in Salinas, California, ships from Dubai, and doesn't say where it was made. Questionable to guys like me who bother to notice these things.

Though it does well under a blazer, this thick sweater is right at home solo under a duffel coat. Not surprising, given the fishing/nautical heritage from which both pieces derive. 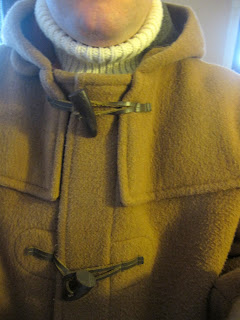 Needless to say, this one precludes the need for a scarf. Earlier today, I found myself on the waterfront, being battered by a chill wind. It stung me in the face, but from the neck down I was well protected.

Turtlenecks are weird. You have to be careful to get just the right one, which is why I went so long without one. Forget the close fitting cotton ones, ugly doesn't come close to describing those. A thin one in cashmere or merino looks well with a blazer or tweed jacket, just don't take your jacket off, unless you're going for a motivational self help speaker vibe. A rugged one like this is great for comfy casual situations, but I've worn it a with flannels and a sports jacket to fine effect. Mrs. G. told me I looked like a news anchor from the 70s...in a good way. I'll take it, thank you.

As for What Price Glory, and the sweater itself, the review is mixed, but leaning toward positive. The sweater is very thick, but a bit scratchy. This seems to wear off after it's been worn a few times, though. It's super warm, which is good, but don't wear anything more than an undershirt under it or you'll be sweating bullets indoors. The fits good, though the sleeves are a bit short, too short to cuff. The sweater shipped from Dubai and was at my house in a week, which is good, but because they use DHL and I wasn't home the first time they got there, it was another week before I actually had it, which is annoying. And I really wish I knew where it was made.

Worth $68? I'm the wrong guy to ask, really. I'm sure it is, maybe that's even cheap. I wouldn't know. I was feeling flush when I bought it, and I'm mostly happy with my purchase, but I've been spoiled by the thrift shops and I can't answer this one truthfully. Still, I find myself reaching for it once a week since it came, so I guess that's the answer.

I can't imagine anything whatsoever being manufactured in Dubai. (Is it produced by slaves?)

I've worn t-necks for so long I don't concern myself ( give-a-damn )with what connotation the "look" has for others.

Not listing the country of origin clearly on the label is a violation of the FTC guidelines under the Textile Fiber Products Indentification Act & Wool Act.

That is a damn nice toggel coat....

There are quite a few apparel manufacturers in the United Arab Emirates, including Dubai, especially operating in the Free Zones - benefits are no customs duty, 0% income and corporate tax, no labor restrictions, no currency restrictions, etc. Skilled staff are imported from India and Pakistan and presumably exported again when they cease to be of need.

I know Jerry Lee who owns WPG for years I won't poo poo his products I personally haven't been disappointed.
The Dubai connection is purely a mailing price break for him for international mailing and also labor and warehousing is cheaper than California. Most of his stuff are reproductions made in Pakistan or India when ordering clothes order a size larger! He find lots of real British surplus example his camping gear hard to find and very expensive shipping elsewhere. So I say yes you can find some real bargins!

Where can one find a decent looking t-neck in tall sizes? Nothing kills a piece like showing your stomach every time you lift your arms.

The submariners would also wear a silk or cotton neck cloth hidden UNDER their turtlenecks to allow for stubbled necks and chins to move freely. Consider that technique on cold unshaven mornings.

Y-W-P: that's brilliant! I have tended to confine my turtleneck wearing to only the days I have shaved (once or twice per week, max, mainly for reasons of skin sensitivity) for exactly this reason. I will have to try this, thanks.

I bought one of these about a year ago and, yes, the scratchiness does go away. Once a month washing in a wool cleaner, a mock turtle hiding underneath and a bit of jaunt in the step makes it a great choice for someone who spends half his working day outside in Michigan.

I have the WPG desert rat sweater, It also has no country of origin tag but was supposedly made in Pakistan when I emailed about it. It is scratch as hell and smells of hay.
I've been eying the RAF/RN turtleneck for a while now, my concern is how does it smell? I want a off white turtleneck that smells like sheep.
-HOM
PS Both shirts, but not the sweater, I've ordered from them have too short of sleeves.