Poplin suits can be a great staple for the well appointed gent in Summer, and they're comfortable in their inherent slouchiness. But don't forget the "other" tan suit, you know, the "dressy" one, tan gabardine.﻿

Yet another tan suit by Brooks Brothers in their last heyday, the 1980s. This one is built like any other business suit, rendered in wool. The only difference is the pale tan hue, making it the perfect dress suit for Summer. Once again, all the details are in place: soft shoulders, 3/2 roll, two button cuff, half lining, flat front trousers in a classic cut with cuffed hems. Not bad for $9.99.﻿ 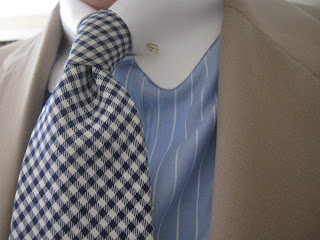 Being more of a "proper" suit, this number takes well to dressier touches in the rest of the outfit, such a contrast collared shirt and collar pin, as well as the the tone-on-tone combo of navy and white tie on blue and white shirt. Note that if you're going to attempt an all pale colored ensemble, texture and pattern will be the key to keeping from looking washed out. Note also that the tie is rendered in what should be an awful rayon/acetate blend, but it's cut well and well made, so it gets a pass. However, remember only one cheap element at a time, and occasionally at that. This seemingly crummy tie hides well amongst a Brooks Brothers suit and custom shirt.The late great Richard Merkin had more than a few polyester pocket squares that he hid in the pockets of custom suits. Get it?﻿ 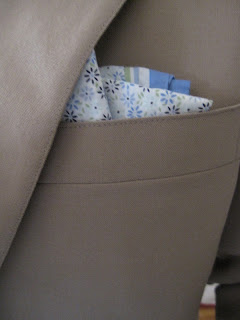 Speaking of pocket squares, I think this cotton one in white with tiny lavender and navy flowers, with juts a whiff of green at the edges, was just the final touch this outfit needed. A real flower in the lapel would have been nice, at a wedding maybe, but hinting at flowers is much less brash most of the time. 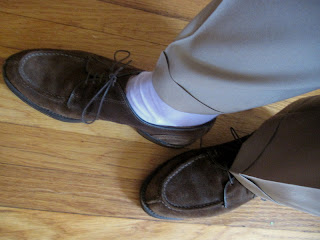 ﻿Brown suede shoes work well here, and the peacocks among you will delight in these lavender socks, which unfortunately never show their color well in photos.
If you happen to have a job where you can really wear a suit, consider tan gabardine for Summer. It's a style that's due for a comeback. Here I've gone for a bit of the old boulevardier in the rest of the outfit, but I think that with a white shirt, foulard tie and burgundy shoes such a suit would be quite appropriate for many business situations in Summer, especially given the lax state of affairs in most business places these days. When the rest of the staff is showing up in too big tennis shirts tucked into too baggy, too long khakis for the loath "business casual", you can own the place in tan gabardine.
Posted by Giuseppe at 10:16 PM

You pull it off pretty cool. Even if I do not like 2 button cuffs on a suit. Looks kind of unfinished to me...

Not to be nitpicky, as it is a great suit, but that is not gabardine. Gabardine is a twill weave characterized by a rubbed twill on the right side and a smoother texture on the "wrong" side.

This fabric looks like a tropical worsted in a hopsack weave, which is better because it breathes better and stays crisper than Gab.

Thumbs up to everything except the shoes...which just don't seem seasonally appropriate to me.

Somehow my eye wants a slightly broader brim on that hat. But other than that, I think it's a fantastic look. It makes studied elegance look casual. You have enlarged my sense of what's possible.

There's no denying that the whole ensemble looks fantastic for summer. Like Bertie Wooster in Chigaco. I know what sort of shoes you usually prefer, but can't help thinking a pair of spectators would have been grand.
Still it's hardly worth nitpicking when someone makes the effort to look so good in summer.

Another winning outfit, to be certain.

Of course spectators would also be great, but not for wearing in the city.

If that sort of thing is important to you.

I recently found an old Cricketeer tan suit in the traditional american configuration, I find that hook vents are not for the ample seated! I have a feeling it may be a wool/poly mix. It has a loose breathable weave but it's a bit crunchy. Any ideas how I can tell?

I then found a beautiful tan BB Brooksgate suit for $8.49 on family day at the Salvation Army. It has a deep single vent (Shame it isn't double vents but much better for me) and a suppressed waist. I assumed it was Gabardine but on closer inspection it has a gauze-like weave so I think it is a fresco wool. Just a few minor alterations needed. Can't wait to give it an airing with white on blue striped shirt and black sandals...Yes, thats right. Black and Sandals!

Interesting, Wardrobe; would that 'last great heyday in the 1980s' be when the owners were good old Marks and Spencer?

Marks and Spencer be damned, the clothes were still real Brooks Brothers back then, made by them in USA.

The best way to tell what the material is is to be trained in it. I understand the most common method is to take a small sample, burn it, and analyze the ashes by their look and feel.

Short of that, guess.

I don't have a problem with slip-on with suits, but sandals? I'm afraid I would need smelling salts were I to see such a get-up.

i like this but why the silly socks man? socks should match the trousers in some way

you dont need a job to wear a suit. just because yankees can't even get their trousers on the morning doesnt mean everyone has to be the same

It looks really great, but I have to agree with the suede shoe criticism. As a woman, I equate suede with velvet - something not to be worn before Thanksgiving not after Valentines Day.