Worth Every Penny : Hat Refurbishment at Salmagundi Hat Shop

I continue to live by my self coined addage that the best new things are old things, particularly if those old things are things you already own. Being thrifty doesn't only mean buying the best things you can for the cheapest prices. The term applies just as well to repair and refurbishment of well made things of value. This can be a bit costly, but there are times when it's worth every penny. 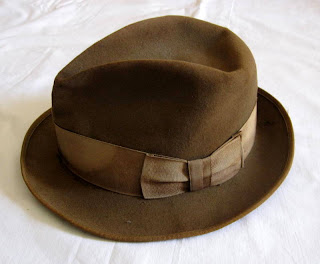 An old Dobbs fedora, from a long gone store called Boyd's of Philadelphia, likely 1950s vintage. The hat is upwards of sixty years old, and I've owned it for about ten. Originally worn with a tattered vintage army coat and tight, dark jeans in my own version of some sort of punk-rockabilly get-up, this hat has been through a lot with me. Lord knows where it was before. It's been cloaked in cigarette smoke, soaked in booze, sweated through, rained on, and even run over by cars a couple of times. But it remains with me, for better or worse, most recently seeing service on the snow man the kids an I built in the yard last Winter. 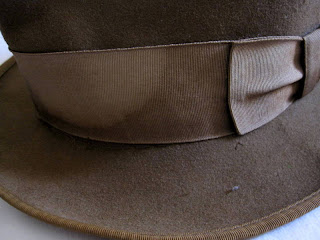 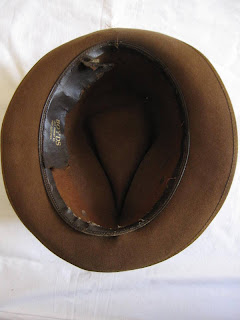 ...a mere shred of the leather sweatband remained, the satin lining lost completely long ago... 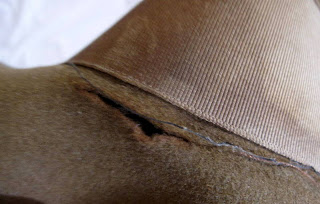 It even had a tear in it, about two inches wide, right in front where the brim meets the ribbon. A lost cause? Hardly.

It's been a while since I wore this style of hat regularly, but lately I've been in the mood. I nabbed a really dressy black number not too long ago, and it got me thinking that it would be nice to have a proper hat that was less formal, one that would look equally well with a Barbour and jeans or a suit and overcoat. The search landed me at the Salmagundi Hat Shop in the Jamaica Plain area in Boston. They have quite a few nice hats, and one of any real quality will run a guy just shy of $100. I was willing to pay, but none of the hats really got me, mostly because all I really wanted was my old hat back. Turns out for $110, a price just $22 higher than the hat I nearly settled for, Salmagundi offers a complete overhaul service. So I grabbed my old brown hat, snapped a few quick photos of it in its ratty state, and headed (ha, "head"ed) over. About a month later, the hat was ready, and I invite you all to join me in welcoming my prodigal son back home. Let's kill the fatted calf. 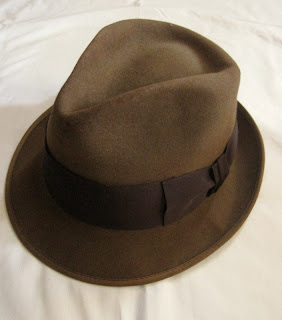 What I got was something shocking, to me anyway. A beautiful brown fur felt hat, sharp and clean, with a lot more shape than the junker I left with them. Still, for as sharp and "new" as it was, it retained the familiar softness and easy fit of my "old" hat. The best new things really are old things. 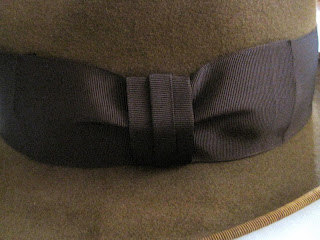 A brand new grosgrain ribbon with an expertly pleated bow gives new life﻿ to this warhorse. The slightly darker brown color gives it a bit of a new feel, perhaps a bit more "city" and a bit less "Grapes of Wrath". By contrast, the fur felt is a few shades lighter, having shed its decades of grit, and once again has the soft fuzzy nap of a nice new hat. The original brim binding in tan grosgrain privides just the right touch of contrast. 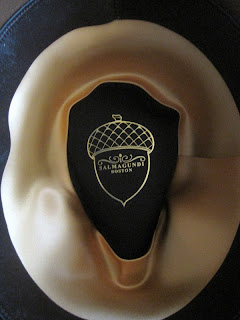 Inside, a new leather sweat band and a new satin lining, proper style. I can dig the acorn logo, and I have no problem with this hat being rebranded as a Slamagundi. They earned it. 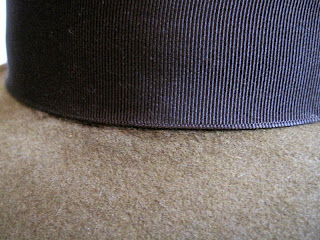 The two inch tear is now completely invisible from the outside... 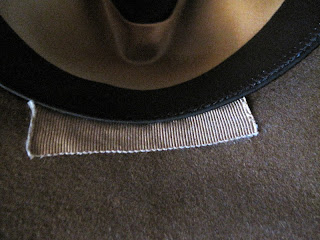 ...though we do have a minor battle scar in the form of this tiny scrap of grosgrain glued to the back of the wound to hold it together. No matter, I like a little battle scar, and given the fact that nearly everything I own has at least one, I'm used to it. Perfection is for suckers anyway.
These kind of hats may not be for every guy, but if you've got what it takes, check these guys out. Plenty here for the well appointed ladies as well. Better still, if you've got an old clunker of faded glory, hand it over for a new lease on life. It's worth every penny.

10 October 2011
Correction: Boyd's of Philadelphia is still running strong and considered to be a decent heberdashery.
Posted by Giuseppe at 9:29 PM

Boyds is still alive and kicking on 18th & Chestnut in Philadelphia!

That's a wonderful display of craft and artisan workmanship. You're lucky to have that kind of service in your city.

It's so very satisfying looking at the before/after photos. The revived shaping in the crown and brim is especially good.

Truly amazing refurbishment. I suppose you already know--but some of your readers might not--of the tie refurbishment (widening/narrowing/repointing) by Tiecrafters Thttp://tiecrafters.com/alterations.html

This sort of care and quality is actually coming back among the younger crowd. On at least two episodes of Jersey Shore, The Situation has worn an Ed Hardy tee-shirt more than once.

I had my grandfather's alpine hat (originally purchased in Bavaria) resized and reblocked, with a new leather band, about a year and a half ago. Its condition wasn't nearly so full of character as yours, but his head was smaller than mine, necessitating a stretch job. A local outfit called Mike the Hatter did a smash-bang job of it. I've used them before and recommend them wholeheartedly, their customer service is excellent, as are their products and services.

Love the look. Do you have any suggestions for reasonably priced felt hats of this nature? I wouldn't even know where to look. They appear to be quite rare thrifting and buying a vintage hat on ebay seems quite a gamble.

NICE!!! Please do a follow-up post with action shots as soon as the weather warrants it. (I'm dying to break out my felts, as I am every year at this time -- and, living in the midwest, I usually have longer to wait than do you in the northeast.)

Blessings, if Giuseppe doesn't mind me addressing your question, I'm partial to Stetson's Saxon fur felt fedora, especially since you can get one for $80 from the Stetson Outlet in Garland (a Dallas suburb), plus $10 FedEx shipping.

Since I already knew I liked the style and knew what size I needed in that model, I called the Garland outlet a year ago, looking for one in another color (being fall, the store where I bought my first one was selling them at retail). I found out about the outlet from the Fedora Lounge message board. I told them the make, model, size, and color I needed. They put me on hold for a couple of minutes, then came back and said they had it. I gave them my credit card info over the phone, and I had my hat the next day.

I don't have their contact info off-hand, but a Google search should locate it for you.

The Saxon comes in Black, Walnut (medium brown, quite a bit lighter than Giuseppe's hat here; this was my first one), Cordova (very dark chocolate brown; saw it in person at my local hat store the other day), Caribou (medium gray; ditto), Graphite (very dark charcoal gray, with a slight greenish tint in certain light; this is the one I ordered over the phone), and Midnight (never seen it in person, but given the name and especially the shade of Cordova and Graphite, this is probably a very dark blue, almost black). Walnut and Caribou would definitely be the most versatile colors with which to start a collection.

OH MY! How wonderfully that lovely hat has been restored! I am so glad I "found" your blog; we're in total agreement except I include women in that number. And, while I'm on a little rant, may I include - Men and Women: *please* cover up your bodies unless you're on the beach. Those Wal-Martians photos cannot be made up...unfortunately.
Anyway, great blog and dressing well can be done on small budgets. It does take taste though and, again unfortunately, there are those who think bad taste is better than no taste at all.

The "before" looks a bit like the hat Robert Earl Keen work in concert the other night!

Ah, a subject near and dear to my heart: fedoras.

That is a wonderful hat, and I'm so happy that you were able to get it cleaned and repaired.

Where to get hats? My favorite source is my hometown haberdasher, John Helmer. Now in its third generation of family ownership, they have not just hats but a variety of accessories and even some suits. Stetson and Dobbs are good brands, and I'm also happy with the Beaver Brand hat I got there.

Another place I've gotten a hat is Miller Hats. Inspired by ADG, I got a coconut straw hat just like his. Unfortunately, coconut straw is more brittle than the straw used in panama hats, but I still like it. Most Miller hats are also made in the US.

I'm sure that the Fedora Lounge has all the hat geekiness anyone needs, so if you need to know more, that't the place to go.