Reader Questions : One for the Ladies

An Affordable Wardrobe is proud to feature our first query proferred by a female reader. It's reassuring to know that I have a female readership here, and admittedly a bit frightening to think that a woman would ask my advice on how to shop for clothes, but I am honored to make an attempt. 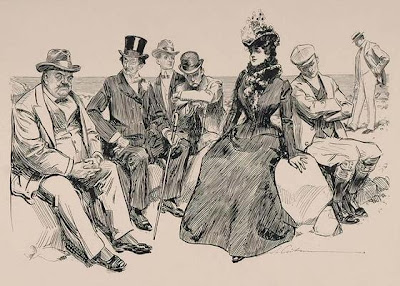 I know you have a general rule to not share decent thrift store locations, but I was wondering if you would be willing to bend that principle and share locations where there are decent options for the fairer sex. Perhaps I have been looking in all the wrong places, but my explorations into various consignment stores and goodwills around Cambridge have turned up nothing but heavily dated clothing and unreasonable prices. I ask simply because it is not as though I would be encroaching on your territory, and new, good quality clothing for women is either non-existent, or wallet killing.

The short answer to the specific question is that I really don't know where to look for good women's clothing on the extreme cheap. Frankly, I don't even glance at that stuff when I'm out "hunting", so I don't even need to break my vow of silence to answer you truthfully. My apologies.

However, this is a great question because it gets at a lot of broader issues that warrant our attention here, and that's what my focus will be.

When it comes to clothing in general, women are simultaneously at an advantage and a disadvantage. The advantage comes in the fact that women's clothing offers a far wider variety of expressive forms than men's clothing ever will. Exotic fabrics, asymmetry, bold color combinations, stylish anachronism and androgyny are only a few of the tricks women can use that men simply can not touch. But that's also the curse in some ways, especially as it applies to second hand shopping.

I've often heard it said that fashion is mainly for women while tradition is a man's game. It may be true that fashion for men does in fact exist, but the strong suit of menswear is it's relative immutability. The suit, sports jacket and shirt and tie combo as we know has remained relatively unchanged for nearly two hundred years. Just look at the men in the illustration above, circa late nineteenth century. They are wearing suits and ties, not that far different than a suit and tie today. Take away the hats and stiff shirt collars and their clothes are a form of what the well dressed man still wears to this day. This makes it easier for a man to shop thrift, for a well cut jacket rendered in good cloth will not only flatter him be it fifty years or two days old, it will likely fit in seamlessly with his existing wardrobe.

Women's clothing, on the other hand, is known for undergoing constant seismic shifts in style. Year to year, season to season, the rules are constantly changing on a drastic level. See the lady in the illustration, out of place when taken out of her time. While this means that for the ladies there is always something new and fun to try out, I feel it is generally a trick designed to appeal to the misogynistic idea that "women love to shop", and so force them to keep shopping. For this very reason, more women's clothing seems to be produced cheaply of cheap cloth, and as such it also appears "dated" in a way that is more glaring than with menswear.

There is a bright side in all this. I've been fortunate to know many women of style in my life, and they've all been able to incorporate very clearly "horribly dated" vintage items into their everyday wardrobes far more effortlessly than most men can. For example, the right woman can wear a 1967 era sun dress in large scale paisley to a casual party with much greater ease and aplomb than a man can wear a velvet suit and neckerchief to the same party. The right woman can wear 1970s fully flared high waisted faded jeans with a brand new top a lot easier than a man can wear white stacked heel loafers with his navy blue suit today. The right woman can wear men's clothes in a feminine way better than a man can wear women's clothes in a masculine way. Women may have to work a lot harder at it, since the rules are not set in stone for the ages the way they are for men, but they also get to have a lot more fun and indulge in a greater deal of expressive creativity than most men could ever dream of.

As for the so called "classic styles" I can only offer the same advice I give my male readers: get a good tailor and make a friend of them. Classics are great, but don't forget you can tweak them. You may find a lot of well made pleated skirts from the late 1980s that look a bit frumpy, but what if you shortened them an inch or two?  What if you took the shoulder pads out of that beautiful wool blazer and had them replaced with softer ones? What if you just said "no" to that awful Christmas sweater, realizing that irony is best used in theatre, not your own clothes?

So, to return to the actual question at hand, I'm afraid I simply cannot help....but I'm glad you asked. My warmest thanks to Natalie and all my lady readers.
Posted by Giuseppe at 10:29 PM

yay, a post for the ladies! i'm a new reader and follower. i love what you have to say about clothing. even though you are talking mens clothing, i learn something whenever i visit. you are right re women's styles. we can mix it up a lot easier than men can. i'm a die hard thrifter but i do not hesitate to add something current to my wardrobe to get a fresh look.

Well, I will share one that I travel to. It's the Savers store in West Roxbury, Ma. I think it is a well stocked store with some nice designer finds. The store is clean and bright and I always find a few treasures.

another gal chiming in... i think that if your dress style is classic, then you can find plenty of great things thrifting. i have the "world's largest collection" of cashmere sweaters, because their style doesn't change year to year. if you wear classic styles, and give it a twist with one current item - some jewelry or a belt - then you can shop vintage. style is very different from fashion. it's all which you choose.

Look for Assistance League thrift stores. The members tend to donate their things and they are often very fine quality.

Also, it can't hurt to go on Ebay and search for St John, Chanel, Hermes and even Brooks Brothers. Also try searching by country. England, France, Italy and keep an open mind about fabrics like Marimeko and Souleido.

When will spats be making an appearance in the ASW shop?

I work in Needham, MA near a small empire of women's consignment shops called The Closet Exchange. They occupy 4 addresses on the same block - one for consignment drop-off, one for designer and boutique clothes, one for "the best of the mall", and the "last chance" store, where I imagine the best bargains are found. No men's clothing, so I can't personally attest, but the shops are extremely well kept and the reviews on sites like Yelp are glowing. I think there are two other women's consignment shops on the same block, so it could be worth the trip. http://www.closetexchange.com/

As a long time female thrifter, I've found that the cost of women's thrifted clothing has increased quite a lot in the last few years. The stores are taking advantage of the popularity and there is more brand recognition with prices set accordingly. That said, you can still find better quality items for the same price range as the H&M fluff.

I agree with Anon. that stores run by the Assistance League and other 'Ladies who Lunch' type charity stores have the best finds. Next for quality are consignment stores near wealthy neighbourhoods.