Warning: if you're the sort of person who is a sartorial nit-picker, trolling the internet looking for evidence of someone having broken some inconsequential minutiae in a  hardbound book of rules of dress that no longer exists just so you can inflate a false sense of superiority by leaving mean spirited and uptight anonymous comments, look away! What follows may cause health problems: 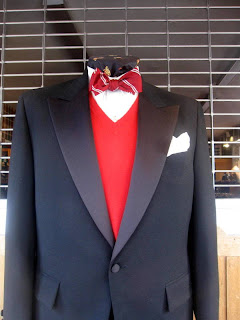 It's not even me this time. This display was spotted while rambling through Harvard Square yesterday in none other than the window of J.Press. Yes, it's true. A tuxedo and pleated formal shirt with a red v-neck sweater, in one of the brick and mortar cathedrals of American traditional style. It's so shocking one almost fails to notice the fact that jacket has flaps on the pockets or the clashing burgundy repp striped tie. Will there be no end to this torture?

I'm not writing this to either praise or malign this unusual combination. Truth be told, I think it's pretty silly looking, but who cares? I don't find any more enjoyment in trashing specific examples of other peoples stylistic chance taking than I do in wallowing in a strict adherence to rules.

The clothing we wear is fraught with meaning. Many people don't realize it, but whether you wear a tux or pyjamas tells things to the world. Dressing well is a sign of respect for those you will deal with in a given day. It should also make you feel and behave better. Above all, it should be fun. If it's all about torture and anguish, what's the point?
Posted by Giuseppe at 7:50 PM

This is basically the philosophy of Vineyard Vines :)

That, and using a combination of business and legal acumen to cash in on a trend.

Surprising the fellow with the moniker 'young fogey' hasn't pitched in with one of his anodyne and pointless comments.

Re. the original post: hear, hear! Some of us happen to get a kick out of following rules (believe it or not), but in the end it's about looking, feeling, and being your best. If that means pocket flaps, so be it.

While I thoroughly enjoy reading about your thrift hauls, if we're being honest, it's turns of phrase like your first paragraph that put you on the blogging A-List.

I'm getting a kick out of how you explicitly refuse to trash it while simultaneously wriggling down the page in utter agony.

Every time I get a little too wrapped up in all the crazyness the internet has to offer about menswear, you always seem to have a well timed post bringing me back to my senses.

My wife thanks you.

Alert Jesse Thorn! That looks like the Official Put This On tie, in bow-tie form!

Rules? Bah! There are too many self-appointed rules merchants doling out advice and criticism. And then one day one of their heroes, like the avalanche of loud, misshapen trousers and bad hair days known as Alan Flusser, or their secular apparel god G.B. Boyer is spotted wearing something idiotic and it suddenly becomes 'okay' because these are eccentrics or "advanced dressers".

Down with rules, personal style laughs in the face of the rules-nik.

Ah, another anonymous mouse has roared!

I'm so happy you enjoy my comments. I'll make sure to continue in the same vein.

That tuxedo jacket is killer! I am the kind of guy that can see the potential and worth in things despite how it may be presented.

Taken item by item, each item is great and I would love to have each hanging in my wardrobe.

Thanks Giuseppe for the beginning statements! Although I believe in the right of affording each their right to an opinion or comment, I do become weary of being preached to about what is "proper and unproper".

Due to it being J Press, are they (the critics) more forgiving than they would be to we common folk?

It's CRAZY MAN. It's CRAZY!! Like spelling pajamas with a "Y". CRAZY!

ADG,
I agree, and I even spell pyjamas with a y.

Roger,
You don't like matched camouflage jacket and tie sets?

The only way I can understand this combination is to think that the stylist who put it together doesn't know that the jacket is supposed to be a tuxedo jacket.

But how could he (or, more likely, she) be expected to know? After all, the pockets have flaps!

The rest of the display included formal accessories: barces, bow tie & cumerbind sets, studs and cuff links. It was quite intentional.

Roger has a legitimate point.

Is that or is that not a perfect example of GTH styling? A tuxedo jacket that flaunts the rules with flap pockets. A LOUD accoutrement of hello-officer-red sweater/tie (the tie could shade match a little better, but I digress).

That's downright the very spirit, if not the letter, of trad Nor'eastern prep styling, if you ask me.