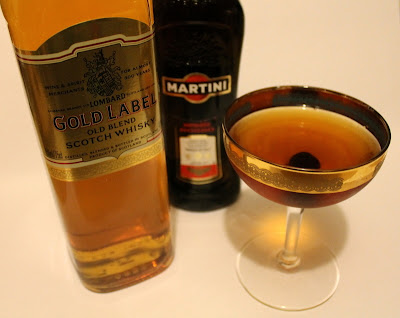 The Rob Roy is a cocktail that could stand to enjoy a revival, so I'm doing my part. Basically, it's the same as a Manhattan, but with Scotch, rather than rye, as its liquor base. Rye whiskey is enjoying a giant surge in popularity these days, which is all well and good. I suppose we have Don Draper to thank for that. And while it's true people still drink plenty of good Scotch, its use as a base ingredient for cocktails, as it was in the High Holy 1930s, remains largely ignored.

Recently, I've discovered Lombard Old Blend Scotch Whisky. $14.99 in the Boston area, if you can find it. It tastes a lot like Johnny Walker Red Label, albeit a bit thinner in texture, but for a full ten dollars less. It's unquestionably better than Dewar's. And it makes a great cocktail.

There are plenty of schmancy vermouth out there these days, chief among them Dolin, Punt e Mes, and Carpano Antico, but for this drink, I think good ole Martini & Rossi will do just fine. Bitters have gotten trendy and gone off the charts too, but I find good ole Angustora does me just fine.

Here's how its done:

Fill a small cocktail shaker with ice. Add 3 parts Scotch and 1 part red 9sweet) vermouth and a few drops of bitters. Stir until chilled. DO NOT SHAKE. This will only make the drink frothy. Strain into a cocktail glass. I like a Champagne saucer, or "cocktail coupe". Martini glasses are acceptable too. Just keep it small. I've told you why before.

Garnish with a real Maraschino cherry. This is the one place where it simply will not to to be cheap. 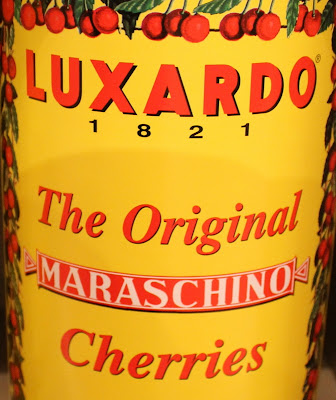 If you live in or near a major city, do your utmost to seek out Luxardo maraschino cherries. These are actual candied marasca cherries (hence the name) from Italy. Once you've had them you will never accept those awful bright red things again. If you can't find these, garnish with a lemon twist instead.

Named for Scottish folk hero Robert Roy Mac Gregor, the Rob Roy proves that Scotch ain't just for warming you up on a cold damp day. It also proves that despite the recent years of single malt only snobbery we've endured, blended Scotch has it's place in the cabinet too. Great before a big meal of steak and red wine, especially if that steak was cooked outside on a grill.
Posted by Giuseppe at 10:41 PM

Those bright things should only be used in childrens' "cocktails": the Shirley Temple fofr girls and the Roy Rogers for boys, although when i was growing up in L.A,in the 50s, the latter was known as a Hoppy, after Hopalong Cassidy.

This recipe sounds really good! I think we need to try it here. Thanks for the tip.

Technically, what you describe here is a "sweet rob roy"

Thanks for talking up good blended whisky. Having been in the trade and taught whisky tasting courses for years, I have had many an argument with whisky-snobs over Single Malt! While Single Malt has its place, blends definitely have a place on all well-stocked bars!

I'm sitting out on the back porch smoking area of my favorite hole-in-the-wall dive bar on Cape Cod right now drinking one of these. The bartender gave me a funny look for ordering it, (it's mostly a gruff shots and beers townie crowd in here,) but mixed it just as you described, and it is excellent. Also everyone in here, many of them old friends of mine, are all dressed really punk, the way I did for many years. I have on Nantucket red bermuda shorts and a plain blue ocbd with boat shoes and a J Press surcingle belt with anchors on it and I've gotten way more raised eyebrows than I ever did with mohawks and spiky jackets. Ivy League style is punker than punk!

I agree, wholeheartedly, with Mr. Redgate. Some of the "establishments" I used to frequent had a similar crowd such as punks, non-conformist, etc. Now when I stop by occasionally, I get looked at like I'm lost because of the tweed, wingtips, etc. Who's the non-conformist now? Good day, gents and excellent drink.

I am decended from Rob Roy - you made an excellent cocktail choice!

BTW, the movie "Rob Roy" came out as a sort of "me-too! Braveheart", but it is notable for its wonderful sword fighting scenes. It is worth taking a look at, IMHO.

I'm partial to an Old Fashioned myself (probably the affect of Mad Men, again), but it's really turned me on to the benefits of bourbon. A little pricier, but I really enjoy Maker's Mark, even straight.

Great post and a great drink. Check out my tutorial video on the Rob Roy over at how2heroes.com, filmed locally at the Independent in Union Square.