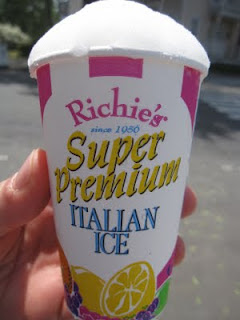 Richie's Super Premium Italian Ice of Everett, Massachusetts. Used to be called Richie's Slush (which we all still call it). A local Summer classic.

Richie's All Natural Italian Ice, the "organic" equivalent. Never had it, ain't interested.

As you know, I am a native son of the Greater Boston area. In fact, I am what the old locals might call a Townie. You may read me in my written voice, but you ought to hear my accent. There's no mistaking it. I've been eating what used to be known as Richie's Slush every Summer my whole life. Lemon is the only flavor for me, because, ya' know, I'm a traditionalist. Townie kids, like my own, tend to prefer watermelon (pink) or the blue varieties (vanilla or raspberry). Every convenience store in Eastern Massachusetts has a freezer chest full of this stuff, especially those located near playgrounds or Little League ballparks.

In recent years, my home town has seen a fairly dramatic shift in the sort of people who live there. The old timers may bemoan the fact that, as they see it, "the yuppies are taking over", though few of them have a problem with the rising value of their old family homes. I, for one, am happy to see the old town doing ever better, but I will admit that the yuppie/fake hippie/self righteous organic bullsh*t crowd can be more than a little pretentious and out of touch at times. Case in point:

I was at the local playground with my kids on a hot day. Just across the street is a little store that sells slush in the Summer time. It's pretty much a given that if we're going to that park there will be a round of slush afterwards, barring situations of extreme bad behavior, in which case t he suspension of slush privileges is a punishment. I was involved deeply in sand box play with my children. I couldn't help but overhear the conversation of some particularly annoying and self righteous neo-hippie trust fund parents bemoaning the fact that the local shop won't carry the organic slush. They would never let there kids eat the regular slush...and it's so hard, because all the other kids get to have slush...but I won't let my kids eat that junk....(hint:because I'm better than the other parents).

I could feel the fury rising within me as I thought to myself how pointless it is, perhaps even needlessly cruel, to deny a child an occasional treat of brightly colored frozen junk food on a hot Summer afternoon. I want as much as anyone for my kids to eat healthy foods, but Jesus, it's July. And I couldn't help but feel that this conversation was being had loudly over on the benches so that the Townie parents, who were all in the sand box actively playing with their kids, couldn't help but overhear.

I was about ready to blow my stack when an older woman came into the park with a young boy, about four years old. She approached the yuppie group and asked "is he one of your kids?" "yes, he's my son" said the lead obnoxious dad, "who are you?"

"I found him up the street wandering alone", said the older woman. The boy had wandered out of the park a block away to the store that sells the slush. No one had noticed, but at least he wasn't being fed that awful regular slush.

If you have kids, play with them. Or at least look after them at the playground. If you live near Boston, treat them to a slush now and then.

Priorities are still important.
Posted by Giuseppe at 9:33 PM

After a brief inspection of the website it seems the main difference between the "All Natural" and "Premium" products (other than calling sugar 'sucrose') is that the "All Natural" lemon contains lemon peel. So yeah, clearly, better for kids. So much better that losing a child is a small price to pay for such righteousness.

I would however venture a guess that at some point in the not-too-distant past, the regular lemon slush recipe was changed to be more cost-efficient, and recently the classic recipe was resurrected as an "All-Natural" product that could be charged a premium for. Just a guess from someone in the exciting world of food service.

My kid still talks about that slush. After we all went there, he fell dead asleep on the subway, artificially blued mouth and and all.

Slush is mostlyfrozen water. Do these yuppie fools imagine it's 'organic' water or something? The rest of the ingredients in regular slush is a tiny dose of flavouring syrup.

Play with the kids! Please. I've got calls to take and "txts"
to write.

Man, great post. Being allowed to ride my bike to the store by myself for the first time was a momentous event for me when I was about 9 or 10. I definitely remember eating a slush while I sat and contemplated my newfound freedom. I grew up on Cape Cod, and it was during a really really hot summer. I could actually use a slush right now, I'm sitting at South Station waiting for the next overloaded bus to go "down the Cape" to visit for the weekend.

Thanks for the great post. I regularly feel my fury rise when confronted with the same arrogant sense of superiority from the same sort of people, who seem to be everywhere.
I remember similar (though no doubt inferior!) products from my childhood, but this sounds like a summer rie of passage. Fortunately, I am will be in Boston next week on business and will do my best to find and sample a Richie's Slush.

Walk into the first corner store you see. Everyone sell's Richie's from Memorial Day through the Fall.

I work in a grocery store in the Napa valley. I see and hear of the "organic/neo-hippy/pretentious" attitude everyday.
Mr. G, on another subject, I found a vintage Chipp plaid blazer at my local Goodwill. I could not believe I scored one that fits! Your blog has inspired me to thrift!

Must be bought from a store whose name ends in "Spa". great post G.

A few years ago when I was working at the Cambridge District Courthouse, which inexplicably is located on the Mystic Valley Parkway in Medford, we used to make the short jaunt into Everett to hit the Richie's on Rte. 16. Usually after a lunch at Kelly's Roastbeef. Classic one two punch.

Playing Devil's advocate here, I hope you notice that you can't really claim the moral high ground here. You show your superiority as a parent to this douchey, negligent, granola dad who tries to do the same thing to the other less "informed" parents at the park. I don't think I need to spell the rest out.
In case you are wondering, I would probably be just as douchey as the parent you described by purchasing the "organic" or "natural" slush version. The only difference is I wouldn't complain to the other parents that it is so "difficult" it is that the store doesn't offer both types of slush. I would find a store that carried the version that I would feed to my child and then bring it in a small cooler if need be. My ideas might be harebrained and
pretentious but they are mine and don't need to be expressed publicly to make other parents feel inadequate or myself superior. It's difficult enough being a parent and trying to do right by your child.

this guy was so involved in crowing about organic slush that his child wandered unsupervised out of the playground and was escorted back by a concerned stranger. That's the corker. Or maybe you skipped the ending.

I have no problem with organic foods. In fact, I tend to prefer them myself. What I can do without is the added self-righteousness which unfortunately tends to come with them as a side dish.

Any parent, or rather anybody, would prefer to eat healthier more humanely produced food. Too bad so many of us can't hope to afford it. No need to make those folks feel like they're poisoning their kids when they likely haven't got any other choice. Most of those poor people wouldn't dream of letting their children wander off like that.

Guiseppe,
My wife often does accuse me of leaving the important bits out of a story, so I can admit to being in the wrong here. However, I did read the dad in question was waxing rhapsodic about the difficulties of obtaining a organic slush and not so subtly incriminating the other parents who dared to give the children the regular slush. I believe I wrote he was negligent.
My point is you are being just as superior to this dad by proving he cannot be bothered to pay any attention to his child while crowing about something inconsequential and proving his "enlightened" views. A double edged sword, as it were. Or somehow ironic? I have been wrong before, so....
Lastly, I believe I wrote I may buy organic but I don't see the need to judge other parents. Sh--ty parents come in all stripes. Poor, Middle and Upper class.

True, but the good ones can all agree that keeping track of where the kids are is top priority. My point in writing this was not to dress the man down for wanting organic foods, but rather for making a bold point of it in a playground where children frequently are allowed ocassional junkfood treats by parents who don't lose their children.

To clarify: I usually bring water and frsh fruit with me to the park, and I frequently say no to requests for crap food. But I do indulge in a slush now and then, and I would never lose track of my kids.

I was raised on the stuff too, Winchester used to have a little card-shop, The Dugout, where we would spring for a Ritchie's on Summer days (and Spring and Fall...and Winter) and you know what? I think I turned out OK.