Country Is Where You Find It

Seems I always find myself writing something about what used to be known as country clothing right about now. After all, the weather has just turned crisp and being a clothes nerd, my attention immediately turns to corduroy, tweed and flannel. 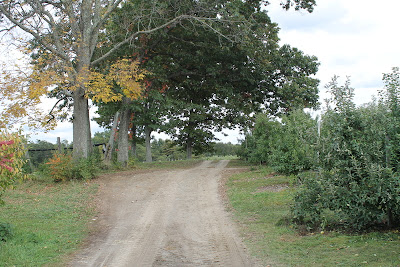 I may be a city kid, but I do ocassionally find myself in places that look like this, especially on Monday holidays when the kids have the day off. 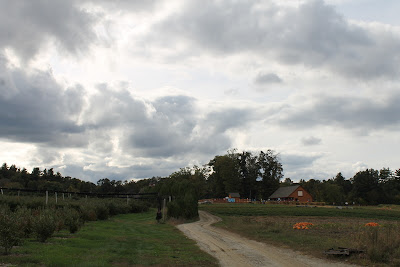 Parlee Farms in Tyngsborough, Massachusetts, just shy of the New Hampshire border, may not be the most rustic farm in the world, but it's a great place to take your kids to pick apples, feed the goats and generally run around with millions of other city kids whose parents have taken them out for some fun in the fresh air of New England. And they have hot apple cider doughnuts﻿ and pumpkin muffins. No such thing as too many of those. 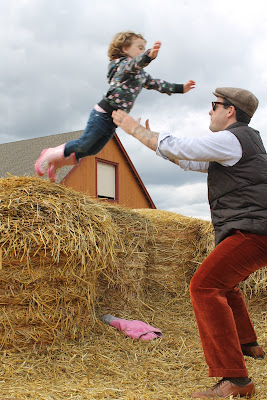 This being ostensibly a shallow clothing blog, let me profer that 8 wale cords, an oxford shirt, and down filled nylon vest are perfect attire for catching a three year old girl in flight at the hay maze. A vintage cap in Donegal tweed and honey brown pebble grain bluchers finsih the job. You didn't think I was going to suggest a tweed suit with plus fours, did you.? I'm not, despite what many may think, that crazy. I do like to look like a grown-up, but I don't want to be a stiff, though I am fully aware that as the only man there in shoes (not sneakers) with his shirt tucked in, I'm the modern definiton of just that. So be it. 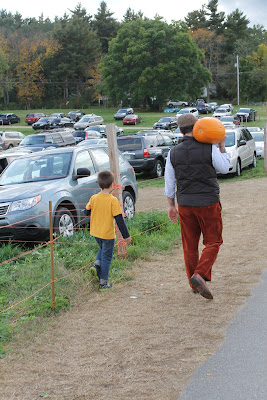 Dressing for Fall is all about utilizing the colors of the season. Rust, gold and brown blend in seamlessly with a setting of dirt paths, turning trees, and a newly acquired giant pumpkin which now graces the entrance to our city dwelling.

I may never go on a duck hunt in the English countryside, but it's no matter. Country is where you find it.﻿
﻿
Posted by Giuseppe at 7:14 PM

Awwww. it looks like you and the children (and your photographer) had a great time. This is the time to wear the colours of the season.

(I grew my own pumpkins this year and they were such fun!)

If you ever bring that damn flea market of yours down south, I'll take you hunting and you can wear all the tweed you want.

Great post! I loved your shoes and vintage cap. The whole outfit was great. Now I want to spend a day in the country!

Jumping haystacks, what a spiffing pair of trousers! Autumn is my favourite season - such beautiful browns, reds and greens and that's just your country clobber.

Great set of photos. Those cords appear to be the perfect color of burnt orange.

Guiseppe
You would be welcome here in north yorkshire, England for a duck hunt (or a stroll round the village) and fit right in.

The word 'fly' isn't really used around here much to describe gents with style- usually its the word 'dapper'... However both apply to your xlnt blog.

Who makes the cords, if I may ask?

Great to see your wardrobe in action! Looks like everyone had fun, and looked good while doing the country thing.