It's no good dressing up in costume, following some set of rules by rote when choosing one's clothes in the morning. Still, it doesn't hurt now and then to stick to the letter of the (Ivy,Trad,Preppy, whatever) law, as it were.

Beautiful weather Saturday, crisp, cool and sunny, saw the first of the season's tweed. This lightweight number in brown micro-herringbone is a perfect transition, very much tweed but not too heavy.﻿ Vintage 1960s, soft shoulders, two button cuffs, undarted front with a perfect 3/2 roll. 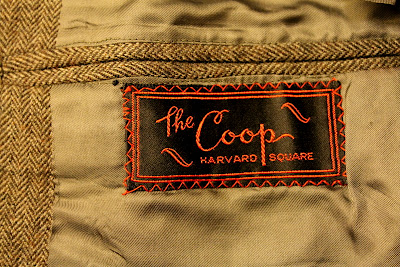 From The Coop of Harvard Square. It's possible, if not likely, that this was once a suit. But I think it holds up nicely on its own. I can't remember exactly what I paid for it, but I'm sure it was less than $10﻿. 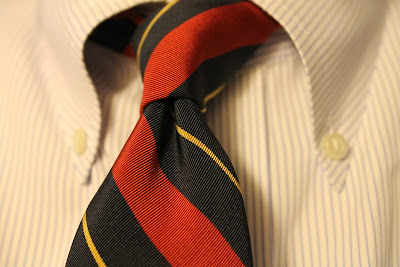 What better to wear with it than a repp striped tie and an oxford cloth button down shirt with blue pencil stripes? I'd been in need of some new shirts recently, and just last week I came across four in my size for $3.99 each at a thrift shop, old ones from Lands' End, two white, one with blue and yellow check, and this one. Once upon a time, Lands' End made must-iron shirts with unlined collars that had a roll to rival the best of the, I wish they still made these. 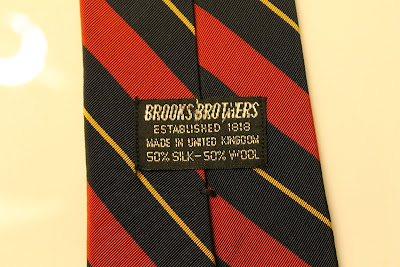 The tie is an old Brooks Brothers Irish twill in a wool and silk blend, picked up over the Summer for $1.99. I've been waiting on this tie for a while, and I have a feeling it will quickly become a regular in my rotation. 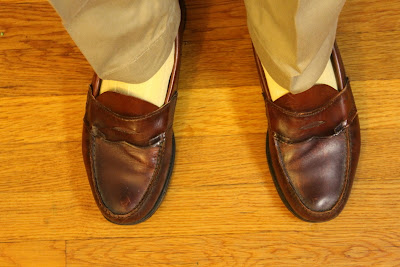 Military issue khakis, starched and pressed, the real deal, courtesy of Zach at Newton Street Vintage, yellow socks acquired in the Infamous Trip to the Outlets, and brown penny loafers. What else?﻿ The loafers are made in USA by Dexter. They may not be Bass Weejuns, but the styling and quality are identical. Not bad for $6.99. 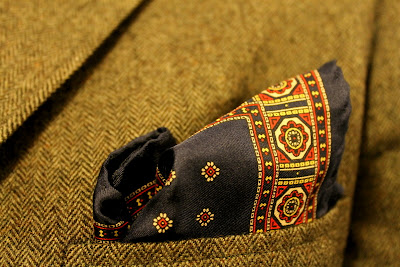 This Italian silk pocket square may not be for everyone, but I think it gives the whole just enough flair to keep it out of full 1960s campus costume territory.

When in doubt, stick to the classics. There's a good reason why this stuff ﻿ continues to stick around...at least for now.
Posted by Giuseppe at 7:32 PM

Very nice! Jealous of those military trousers. A lot of my own outfits lately have been very Trad/Ivy/'60s campus style with a healthy dose of military surplus or military-inspired elements. I think the two styles harmonize surprisingly well. Also I dig the pocket square.

Nice jacket. Maybe I'm a different sort of classicist, but I don't feel that khakis work with tweed. I only ever wear khakis or chinos like jeans, because they look and feel like thin jeans masquerading as trousers. They also crease too badly to complement a tweed jacket. Cords work better, but it's perhaps a little too warm for those yet.

It might just be that I'm not From the U.S. and thus have no affinity to or history with khaki pants.

I think you hit the nail on the head. For us, chinos are a natural complement to tweed (or even corduroy) jackets, and of course chinos will produce a more casual look, in part because of their propensity for creasing.

Your comment shows that we still have some national differences in dress, which is, in my opinion, a good thing. I further think that if you believe that tweeds and chinos don't mix, you shouldn't wear them together. You'd be uncomfortable, and that would negatively affect how you look.

Love the tie and shirt!
Would like to see more cuff under the jacket. Trousers are a bit too wido imho.