Free Stuff : LSTN Headphones (or: ain't nothing like the real thing) 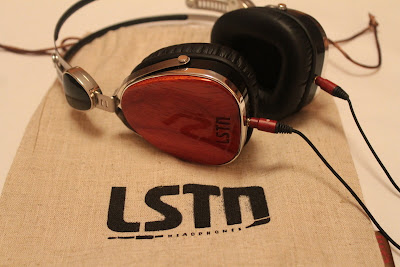 Recently, I was sent a pair of headphones for review by LSTN,  a relative newcomer on the scene. LSTN offers earbuds and headphones made of wood reclaimed from the scraps of the furniture industry. So far, so good. They also donate a portion of their sales to programs that help deaf children. So much the better. I can dig it.

When they first contacted me, they offered a pair of earbuds, what they call their Bowery model. I replied that while I liked what they were about, as an avid vinyl/analog enthusiast, earbuds were essentially useless to me, and I could hardly give them an objective critique. They decided to send me a pair of Troubadors, which  retail for $150. I anticipated their arrival excitedly. As a music lover with an extensive vinyl collection who usually gets home well past everyone's bedtime, getting a good set of phones has been on my "to do" list for some time. Getting a pair made of wood was un-heard-of. 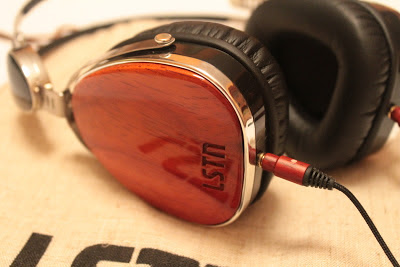 When they arrived in the mail, I sure did think they were pretty. Cherry wood cans, with separate left and right inputs tipped in cherry. Only trouble was, they had a 3.5 mm jack on the end, and the big old analog record player takes, of course, 1/4 inch RCA jack. So, I listened to them on the phone, and on the laptop. And they sound, I guess, better than other phones on the phone or the laptop. But really, what audiophile considers the phone or the laptop any kind of reasonable facsimile of actual music. On the LSTN website, there's a lot of talk about how they use wood for the same reason pianos and violins are wood; resonant acoustic qualities. So I decide to wait until I had an adapter and could put these to the test via vinyl before I formed an opinion. 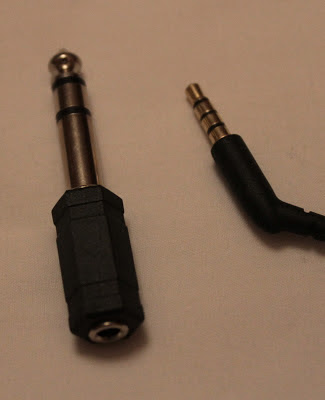 So I get the hook up, and I'm all excited, and I plug it in and.....sounds like crap. Disappointment to the bone. Then I notice this dang thing: 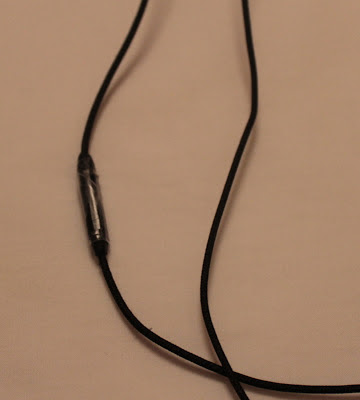 The phones were simply not up to the task. All the reviews I read of them before were nothing short of glowing, praising the deep bass and lack of any "clipping". But I guess none of these people listened to anything analog, or the least bit physical. That's fine, I guess, and in fairness I do suppose these phones were made for more modern, albeit perhaps inferior, modes of recording /listening. And in fairness, I am an old fuddy duddy at best. But I must say, these left me flat. 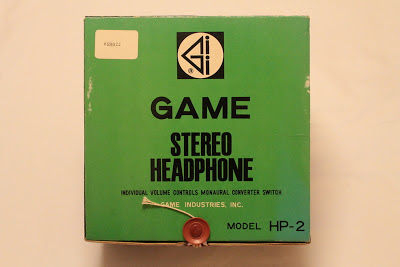 Today, about ten days hence receiving the previous pair, I walk into a thrift shop to find this box sitting on the front desk. Of course, I nabbed it immediately. No word on the maker. Googling Game Industries only brings up a lot of video game crap. Ironic. 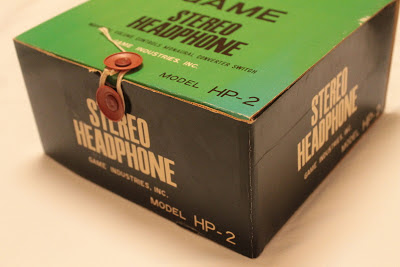 I bet you can already tell where this is going..... 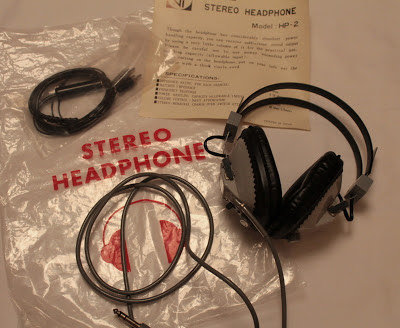 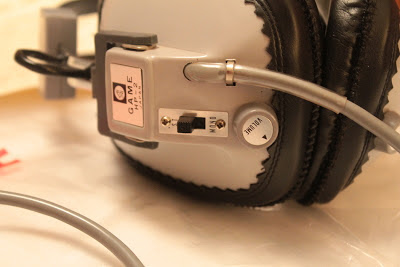 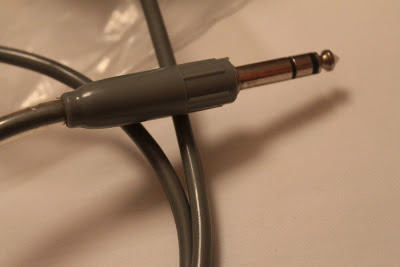 Do I even have to say it? 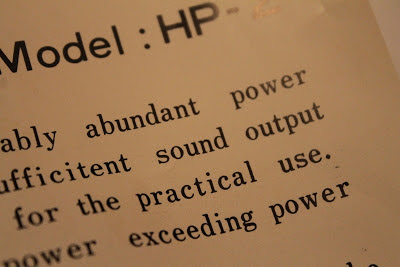 I have long been of the opinion that the technology of recording and sound reproduction reached its pinnacle in the late 1970s. I stick by that belief. Without having any of the science or terminology to support my argument, I can only speak from how I feel, as both a musician and lover of music. So I gave these the same three song test as the others. With the first pair, I could barely be bothered to listen all the way through. With these, I got a chill down my back, and wanted to stay up all night listening to everything: Led Zeppelin, Sergio Mendes, Motorhead, Eric Dolphy, Brahms, you name it. Direct and bone felt deliver of the human glory that is music.

$150 for the LSTN pair, regardless of the charitable component, would have left me cold. $4.99 at the thrift store, charitable component a plus, leaves me happy in a way that can be hard to describe to those who love neither analog nor thrift shopping.

Sorry, but analog has duende, and digital simply does not. Never will, it ain't human.

Without having any of the science or terminology to support my argument, I can only speak from how I feel, as both a musician and lover of music.

I think this is the key here. As a fellow musician, I think the placebo effect or the confirmation bias effect might have gotten to you. High quality digital recordings are better than anything from 1974. They might not feel or sound better to you personally, but they are better in every measurable way. Just wanted to chime in to say that. Love your blog otherwise!

I'm not sure what analog vs. digital has to do with one set of headphones vs. the other. Wired headphones (like all speakers) are straight-up analog devices. All the digital to analog conversion happens before the plug.

I'm not surprised that the older headphones sounded better to you. My opinion has always been that most decent quality equipment all sounds pretty good, and the differences are subjective.

That said, I think your review may be a little flawed in an unfair way. Do you see how the 3.5mm plug has four segments on it and the adapter you have has only 3? This discrepancy is why your headphones didn't work without depressing the button, and it almost certainly affected the sound. The adapter was likely not designed for 4-segment plugs and so shorted out or otherwise improperly connected two of the segments.

I think it's silly that an audiophile set of headphones wouldn't come with an adapter like that, but I also don't think it's a fair test unless you use an adapter that was properly designed.

Just my 2 cents. Love the blog.

Fair enough about the adapter. I plan to try again with the proper one. However, I do feel that a pair of audiophile headphones costing $150 shouldn't require additional equipment to simply plug them into a good stereo.

As for the differences between analog and digital, it is of course largely subjective. While digital recording may technically be better in every measurable way, there is no doubt in my mind that analog technology is superior in all the unmeasurable ways. The amount of musicians I know who still seek out cardioid iMacs and two inch tape bear me out. There is such a thing as "too" clean.

One of the reasons why musicians seek out analog tape and vacuum tubes is because they distort the audio signal in a way that happens to be very desirable. Tape compresses the signal in a way that is very flattering to drums, in particular. Many digital recording studios keep a tape machine around just for tracking drums, then transfer it to digital. Of course, these days the digital processors that simulate these effects have gotten REALLY good.

It may be possible, given the best possible playback equipment, to notice a difference between a 16-bit/48k compact disc and a nice 180 gram LP. However, I know musicians and recording professionals who have heard 24-bit/96k systems, and supposedly it is pretty damn amazing.

The other problem with digital music is compression. A jazz track with bright, sizzling cymbals and a deep, warm upright bass will sound like garbage if compressed into a low bit rate MP3 file. But memory gets cheaper every day - there's no reason to compress at low bit rates anymore.

So G, the technology will get better and the sound your're missing will come back. But nothing will ever beat scoring a stack of vinyl for chump change at the trift!

Or the innate physical pleasure of placing a needle in the groove.

I'm an analog fan too, but I think there are some psychological factors that cause bias.
Vinyl and lowering a stylus into it, producing 'that' sound before the music starts, reminds me of different, simply times when the technology was comprehensible in a tactile sort of way. It triggers memories.

Anonymous is right I think, that as compression becomes less necessary digital reproduction will shine. Then again, what are those digital processors trying to emulate? Rich analog sound...

Giuseppe,
I totally dig your retro badass ways but I gotta tell ya...I for one do not miss putting needles on records and scratching them up. I dig the sound etc. but trying to put the needle on just right...I can do without that!
-Bob
St. Louis, MO

Placing a stylus on a record isn't rocket science...

Just wanted to drop a Thank You. I've been reading your blog for a few months now. If it wasn't for this post, I'd not have been keeping an eye out and I would have missed buying a pair of these. Only mine are black, and I paid just $4.99 for mine. And WHAT A DIFFERENCE. Deep, rich sound. Thanks for the eye-opener, . . . ear-opener(?).

(BTW: Congratulations on the new store.)