Recently, some bikes were stolen from my garage. I was home when it happened, and ran outside just in time to see the lousy punks taking off down the driveway. Very upsetting. I won't dwell on the low aspects of the event here. Instead, I've managed to find a bright side in all this. 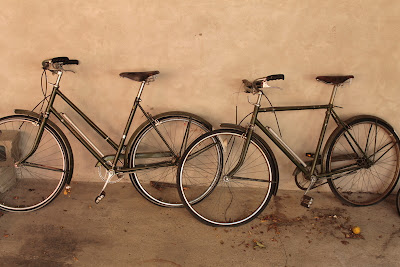 The bikes they took were Mrs. G's daily commuter, a birthday gift from me some few years ago, and my old fixed gear, a bike I'd had for longer then we'd lived together, never mind been married and had kids. What they left behind were these two old Raleigh Sports English three speed bikes. I bought this matched set of his and hers bikes years ago. Mrs. G never much cared for hers beyond aesthetic reasons. Mine saw plenty active duty [see here(yes, those are boat shoes with socks, despite my ravings here)]. When our second child came along, mine was put away as it couldn't accommodate the trailer I needed to tote both kids. Tires went flat, rust formed and dust gathered.

So, the other day I disassembled both of them, and cleaned up all the parts. Some parts were usable, others in pretty rough shape. But fortunately, between the two bikes I managed to collect enough pieces to make one. 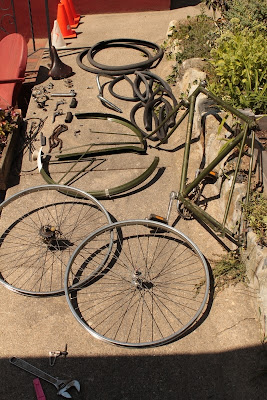 A frame, stem and crank from the men's bike. Wheels, fenders, and almost everything else from the ladies bike. This may seem like a lot of work to some of you, but I actually enjoy these kind of projects. Besides, not only do I not have the money for any kind of new bike, thrift shopping has made me feel as though its cheating when I don't have to refurbish something just in order to use it. Call it reverse spoiling, I guess. 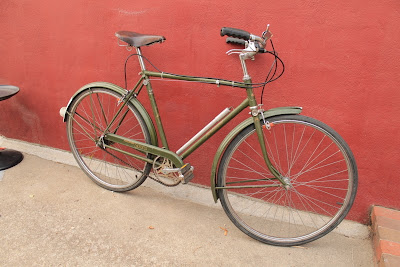 A little more than $40 for odds and ends at the local bike shop, and the old battle bike rides again. It's a "penny loafer" bike, in that one can actually ride it in a jacket and tie. I may even start riding it to work, since it's the only bike I've had that can be ridden in shoes. 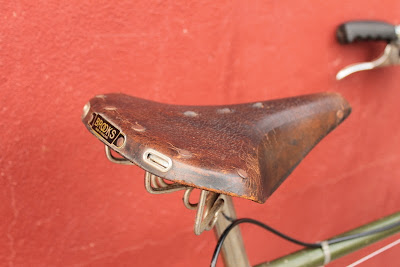 The old leather Brooks saddle gets a rub down with some mineral oil, and it's got another life in it. 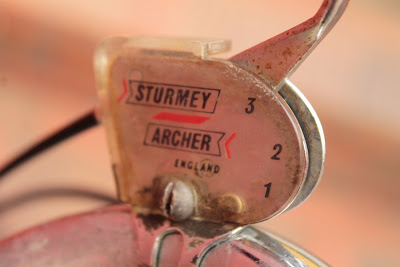 Sturmey Archer three speed mechanism gets a new cable, and it too is good as new. 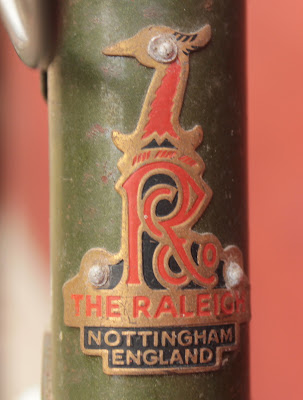 Nothing like a Nottingham Raleigh. It may not be as "sexy", or garner as much "street cred", or however the kids call it, as the old fixed gear, but I'm not one of those kids anymore anyway, and this old beast is better suited to life as I live it now.  So the bright side is that this wonderful thing which has suffered such awful neglect for too many years is once again alive and strong. I feel as though I accomplished something, and the Boy helped out, learning some useful bicycle maintenance in the process. I also saved a lot of money, and kept something out of the trash. People who don't buy and use old things tend not to understand the good feeling that comes with that.

Still, if I ever catch the punks who took our bikes.....

p.s. I have had a lot of emails regarding hours in the Shop. You may notice there is an icon in the sidebar with this information. They are as follows:
AN AFFORDABLE WARDROBE
249 ELM STREET, 2ND FLOOR, SOMERVILLE, Mass.
SATURDAYS, 10-2
TUES. - FRI. BY APPOINTMENT.

I look forward to seeing you there sometime. I have a lot of great tweeds in stock now, with more to come as the Autumn approaches.

Those Somerville hipsters just can't resist an old bike, eh? My parents had his and hers Raleighs; quite similar to the pair in your picture. However, my mother's was white and my father's was green/olive. Man, they were heavy and hard to shift.

My grandfather, who owned the apt building we lived in, always had a garage full of bike parts. It wasn't until late elementary school that I realized that some people actually had to buy a bike and not just go out to the garage and make one.

Sorry to hear! Still, keep an eye on Craiglist and eBay just in case. A number of bike thieves here have been nabbed that way. I know of at least one right in Somervile.

I wish I lived in an area where I could commute to work. It just isn't a safe place to commute. I do however bike out in the country for fun and fitness. I also love these types of projects that you did. I think it was amazing taking two bikes and making one good one.

We all had Raleigh bikes that my dad brought us back from Nottingham, his home town!

Bravo! I bought a 1974 Raleigh sports on craigslist last year for $50 for the express purpose of it seeming to fit in more with riding in a tie and cardigan!

If you're interested in finding out the date of your Raleigh, check out this site:

Your bike is almost exactly the same as mine. The exact same colour, design and features.

Mine, however, is a BSA (British Small Arms) from 1957. I'm not exactly sure of the date, but Raleigh bought BSA's bicycle division in about 1956 (or later) and the bikes are basically the same models badged differently and probably made in the same workshop.

I've used mine every day for 18 years, with minor repairs and a few small overhauls. What I love about 3-speed hubs is that you can stop at traffic lights, change gears in a stationary position and be ready to go in 1st when the lights change.
Being able to cycle in an upright position is how I want to cycle. In the city being aerodynamic is not that much of an issue; I don't want to win the Tour de France

Here in the Netherlands most bikes are either vintage ones like these or new bikes made in the same design.

Your Brooks saddle has a nice colour, mine has dulled considerably. Excellent that you've got everything up and running.

Its heavy, but well balanced. Shifts like butter. Its just a matter of proper lubrication.

Raleigh bought all the other British names post WWII, BSA, Philips, Rudge, Rampar, you name it. All good bikes though.

I bought a new cream colored Raleigh 3 speed in 1977 and still have it. Last year I took it to a bike shop for a tuneup and got several offers for it. In college it was the best bike since you can change gears while stopped. I went to a bike crazy school where you damn well better stop at lights and stop signs or you'll get a ticket!

Having just had a locked-up blike stolen from in front of a busy rapid-transit station and across the street from Chicago Police Headquarters, I'm still in shoot-bike-thieves-on-sight mode. I was fortunate enough to find another bike on Craigslist almost exactly like my stolen one, and this time around, it's being protected with a Kryptonite lock. I wish your bike thieves all the plagues of Egypt, especially boils ;)

Etsy has an amazing wine carrier that I think would suit a man of fine taste such as your self. http://www.etsy.com/ca/listing/110578376/bicycle-mounted-leather-wine-bottle?ref=cat_gallery_34