Free Stuff: Pons Avarcas (or, late to the party, part 3)

Let me begin this post by saying that I've never been a sandals kind of guy. Also, be warned that for the more hard lined traditionalists among you, this post may induce wailing and gnashing of teeth. 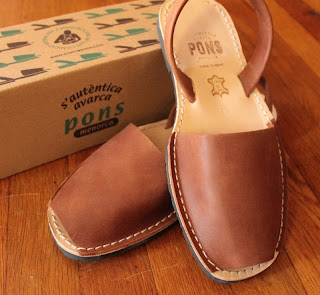 I was recently sent this pair of Pons Avarcas for review. Avarcas are a type of sandal made on the island of Menorca off the coast of Spain. The name is actually government protected, much like a wine appellation. When the good people at Avarcas USA contacted me to see if I wold like to try a pair, my first inclination, as some of you might expect, was rejection out of hand, as sandals are not something I have ever considered wearing. But these were different. For one thing, they cover much of the front of the foot, thus giving a much more finished appearance than say, a flip flop. For another, the materials and construction appeared to be of high quality, and the  business is family owned and operated. Lastly, the original avarcas were made using recycled car tired for sole in the 1920s, so both my recycling and "old stuff" buttons were being pushed simultaneously. I'll admit, I was intrigued.

In the last few years, I have come around to wearing proper Spanish espadrilles in Summer, and I'm glad of it. I recently saw an old European guy wearing plaid shorts and a tennis shirt, untucked with both buttons buttoned, with some similar sandals and I couldn't help but admire his effortless euro-prep style. Plus, I do derive from Mediterranean stock, so I figure I can justify at least a try. 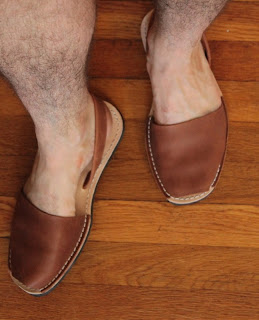 I figured that given the time of year I'd have to put these away as soon as they arrived, but then we got this stinko heatwave in Boston. I can tell you that the leather is of excellent quality as is the construction. I wore them around the house, but was a little shy of taking them outside. They are comfortable, and I felt right away that these would become really great with years of wear.

The next day, I took them out for a spin, with plaid shorts and a tennis shirt, a la our old gent, and I was surprised at how much I enjoyed them. Besides being comfortable, I actually forgot I was wearing them, a sure sign of the best clothing. Its no good being to conscious of your clothes. Tres gauche. By the third day, I was happy to don them again.

These would be excellent at the beach of course, and on vacation in warm places. But I think they do just fine for daily activities around the old town. Since the whole top of my foot is covered, I tend not to notice them too much out of the bottom of my eyes, you know, like when you have on shoes that are too white.  And while I wouldn't them out to dinner, I see no problem wearing them to the taqueria at noon.

The short answer is, I really like these, more than I would have thought. I feel oddly inclined to apologize, but I won't. Because really, a dose of languid old world European charm is often just the thing to keep all your striped ties and navy blazers from making you look like a stuffy old man.

They cost $75 a pair. Truthfully, I'm not in the habit of splurging for shoes, but when we consider the level of quality here and the fact that good shoes will run you around $300 at least, I'd say they are priced fairly. My penny loafers will still be the go-to choice with trousers in Summer, and the old Quoddy's will continue to see fair rotation. But I can see these becoming the shoe of choice with shorts next July. I guess that speaks to both the quality of this product and the truth in the fact that style is an ever evolving thing.
Posted by Joe at 9:26 PM

Can't help it, Trey. I like the damn things. There was a time when I would never have admitted it, but the older I get the less I care about stuff like that.

You're a great guy, and I've been reading and enjoying your blog for years. But you are wearing ladies sandals. I won't stop reading, and I don't care, but you needed to be told.

I have a pair of sandals something like these, made in the south of France.
They're not "ladies sandals", as Mr. Anonymous would like to think. When I hear nonsense like that I know I'm dealing with a stuffed shirt type.

Here is a good source for espadrilles and avarcas:

I buy all of my espadrilles from this place.

when i see "slingbacks" i think women, but it is a good looking sandal.

Love them actually! I think these sandals are totally unisex. They look very well made.

You look cool to me! I have a pair of them in brown as well. They are unisex, very versatile, avarcas last forever. Very well made. I got mine at www.avarcastore.com