Brushing Off My Tails (alternate edition) 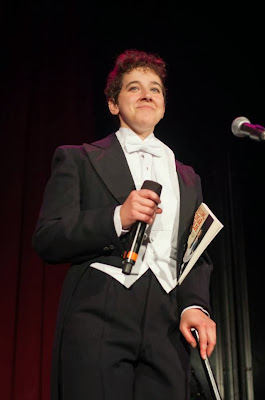 In the first weeks of having my Shop open, the going was pretty slow. One fine Saturday as I sat alone in the place, I decided to go downstairs and get some fresh air. After about ten minutes, I went back up to find Jade Sylvan, a friendly young lady (young fellow? I'm as open minded as anyone in Massachusetts, but I admit the terminology still confuses me sometimes. Beg patience) from the yoga studio down the hall, in my shop dressed in a vintage 1920s tail suit I had at the time. I have a weakness for old formal wear, but as a businessman I realize I should avoid it. It's so hard to sell, given that we live in a time where "dressed up" means little more than tucking in your shirt and wearing your "good jeans." This particular suit had been with me a long time. It's hard enough finding a guy who fits a size 36 short, never mind one who will ever attend a party in full evening dress. Imagine my pleasant surprise then when this affable drag king and I crossed paths. Not only did the suit fit her perfectly, but she just happened to have a release party for her new book, Kissing Oscar Wilde, coming up, the perfect occasion to be an to be a drag king in an antique suit.

Of course, dressing in drag is nothing new for bold women with strong personalities. Dietrich and Baker showed us the way back in the old days, when suits like this were new, and actually worn with some regularity, mostly by men of course. It may not be as shocking to us now as it was then, and that's a good thing. It means we're collectively getting over it. But it's still just as cool. 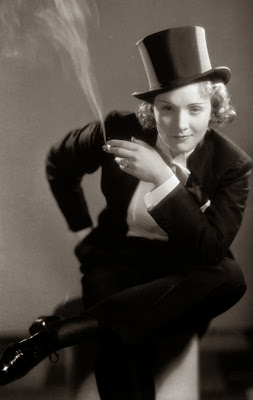 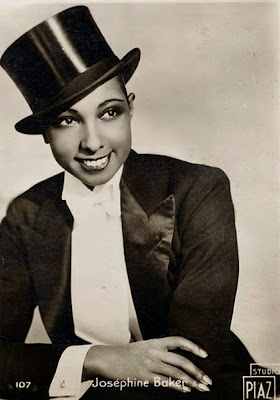 Jade may not be as famous (yet) as these two, but she certainly deserves to be ranked in their company. I am pleasantly surprised, and honored, that nearly one hundred years after the trail was blazed and this suit was first tailored, something I provided wound up being a part of it too.

Marvelous. Glad to see a great set of clothes find a good home where they'll be appreciated.

NOW you tell me you have a 36 short tailcoat! You'll probably never see one in that size again.

If I had a tailcoat, I would make occasions to wear it. I already have the detachable-collar shirt (for my vintage tuxedo) and wing collar; I also have opera pumps. It would not be that hard to find a white vest & tie. The hard part is the tailcoat & trousers, and now they're gone!

Well, I hope the young lady gets good use out of that incredible set of clothes. (Let me know if she ever decides to sell them back to you!)

For those too young to recognize the allusion in the title: