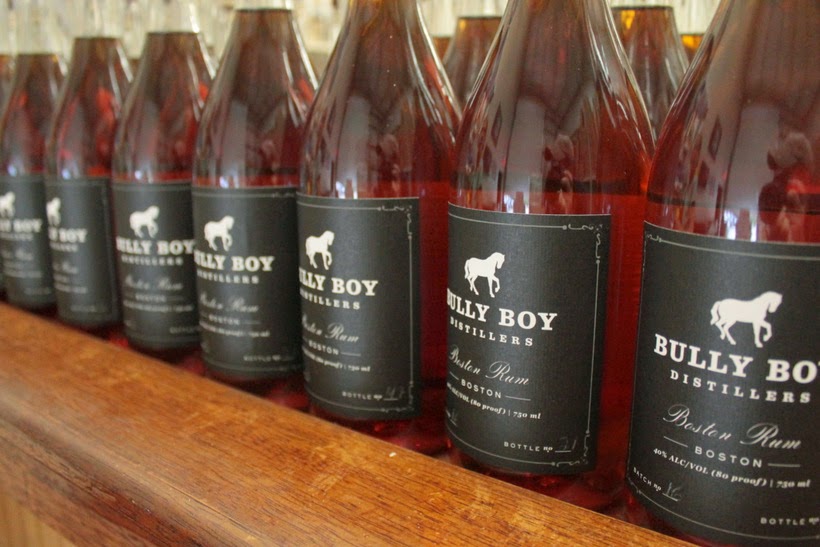 Bottles of Bully Boy "Boston Rum" being packaged at the distillery

Remarkably, for all the years I have spent in the business of selling booze, I had never been to a brewery, winery, or distillery. Just the other day I decided to change that with a visit to Boston's own Bully Boy Distillers. Hidden away in a nondescript aluminum garage, across the street from the back side of an elementary school no less, I may never have even found the place if it weren't for the  fact that the weather was warm and one of the doors was partially open, and I could see a stack of oak liquor barrels inside.

I've been familiar with Bully Boy spirits these last few years they've been on the market, selling them in the store. Initially only white spirits were available, as the "brown goods" as we call them take some time to age. I knew they were small and local and the liquor was good, so I was happy to recommend them. A few years later when a dark "Boston Rum" and an aged "American Straight Whiskey" hit the scene, I was hooked, being more of a brown goods guy myself. 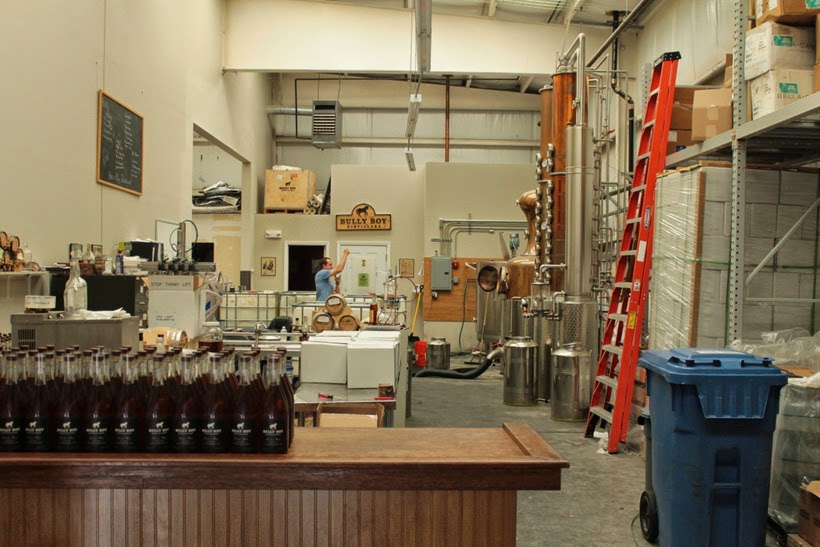 To call them "small batch" almost doesn't describe it. This place is tiny. A two door garage, divided into two rooms. On the right, a tasting bar, office, bottling and packaging line, and the still itself fill one room. 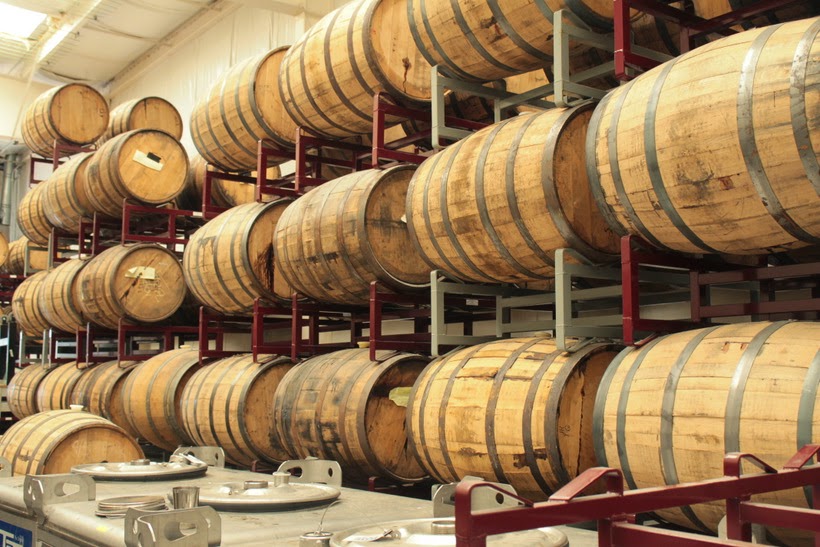 In the other room, barrels of whiskey and rum line both walls, stacked to the ceiling. Large plastic fermenting tanks take up the center of the room, along with tanks of molasses and pallets of grain. In the foreground of this shot, a tank of molasses undergoes initial fermentation on its way to becoming rum, while another tank holds a fermenting "mash" of 45% corn, 45% rye, and 10% wheat that will become whiskey. It's a tight squeeze, but brothers Will and Dave Willis obviously run a clean, tight ship. 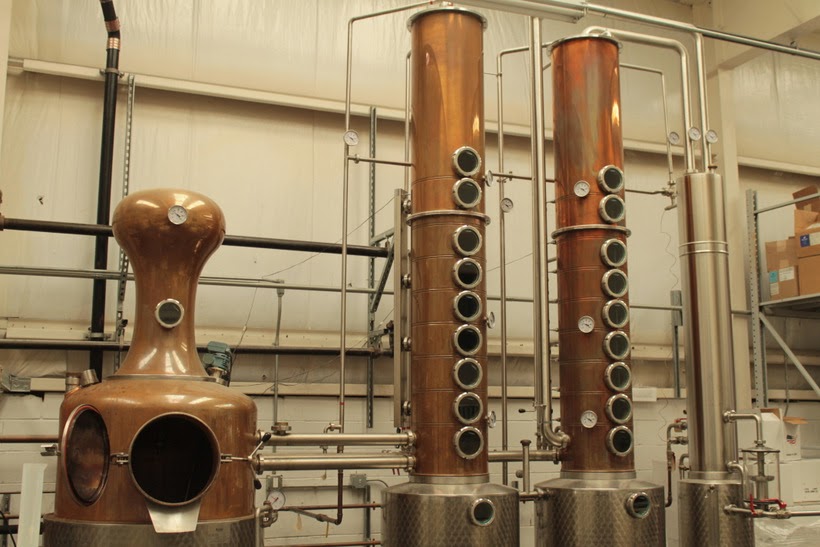 It all gets distilled in tiny batches on a German made copper still. Running the still for an entire day, Will tells me, yields only a few gallons of raw liquor. That's something to think about when considering the price of a good bottle.

Bully Boy's story is a good one, and as I speak with co-owner Will Willis his passion not only for craft distilling, but also for history, and the city of Boston, is clear. Will tell's me that Bully Boy started with an interest to bring back Boston's long lost but storied distilling tradition. He and his brother Dave grew up on a farm in Massachusetts, where they discovered an old family vault containing a rare collection of old liquor bottles, all locked up there apparently as a secret stash during prohibition. The name "Bully Boy" was the name of a favorite horse of his Grandfather's, and references not only Teddy Roosevelt, but also the old Bully Boys of Boston, the hard working folks who did the dirty work for Boston blue blood "Brahmin" society. The brothers take their cues form these old bottles, and offer a set of spirits that have a fun nod to history and an inherent "Boston"-ness about them, while still remaining unique and somewhat modern. All of this is offered at a very fair price at retail, no easy feat. 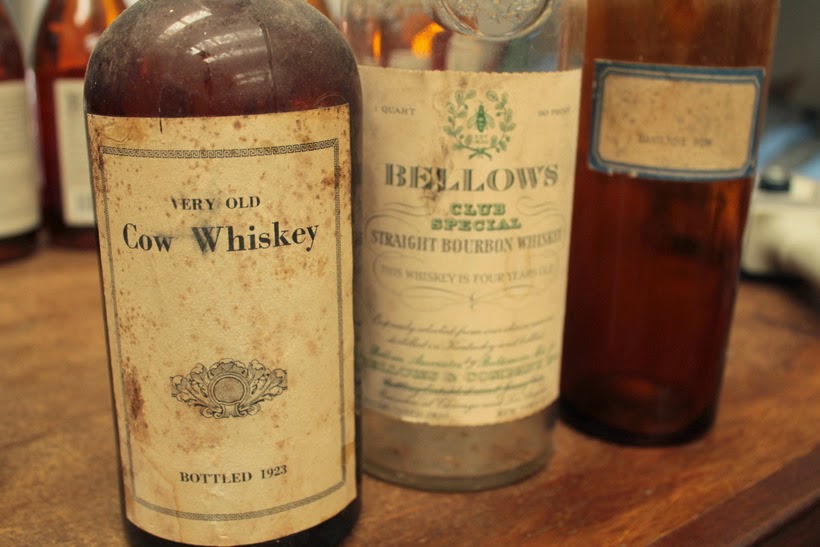 Old bottles found in vault at the farm. "Cow Whiskey"?!? Bully Boy used these as inspiration for the design of their own labels.

The white spirits all retail for roughly $30 per bottle, and are clean, direct expressions of their ingredients and the brothers attention to quality. The vodka is clean and bright, despite having been distilled only once rather than the multiple times common these days, proof you can get it right on the first try. The white rum has a glycerin texture and just the right sweetness without being heavy, great with tonic and lime. The white whiskey is perhaps similar to the vodka, but has more of a biscuit bread note to it. I've actually had it in a margarita in place of tequila and it was quite good.

The brown spirits are a whiff more expensive, but still quite reasonable at around $35. Their American Whiskey qualifies as neither Bourbon nor Rye, being only 45% corn and 45% rye, shy of the 51% of either of those needed to bear the names. As such, it bears some of the better attributes of both: the sweetness of bourbon tempered with the spicy qualities of rye. It's got plenty of flavor, and a good bit of chew, yet it's light on it's feet and mellow at 84 proof. Great as a sipper, I also like it mixed with lemon juice and club soda, garnished with peach slices.  "Boston Rum", the same initial distillate as the white rum, finishes it's aging in the charred whiskey barrels once the whiskey leaves them. It's dark amber in color, rich and chewy, and being made from molasses really hearkens back perhaps more than any of their other products to Boston's old liquor history. We are a port town, after all, and sailors love rum. Sip this one in a snifter or try it on the rocks with muddled lime and sugar.

You won't find Bully Boy far from Boston, at least not yet. If you're a local and you haven't tried it, get out there and do it. Any good bar in town stocks it by now. If you're visiting Boston, do yourself a favor and take some home. It makes a way better souvenir than a Red Sox t-shirt made in china that you can get anywhere. Bully Boy distillers is a real taste of the New Old Boston.

Thanks for the review. I've been meaning to try their whiskey for a while now. Is the Boston Rum too dark to stand being mixed with tonic?

Hmmmm, son is visiting Cambridge for a college visit. I might just have to bring some "American Whiskey" back to the Midwest...

It's a whiff darker than Mt. Gay, but nowhere near as dark as Gosling. I think it works fine with tonic.

Do it. It's not expensive and it makes a great souvenir. Any good liquor store in the Cambridge area should have it. Ball Square Fine Wines, nearby in Somerville, is particularly nice.