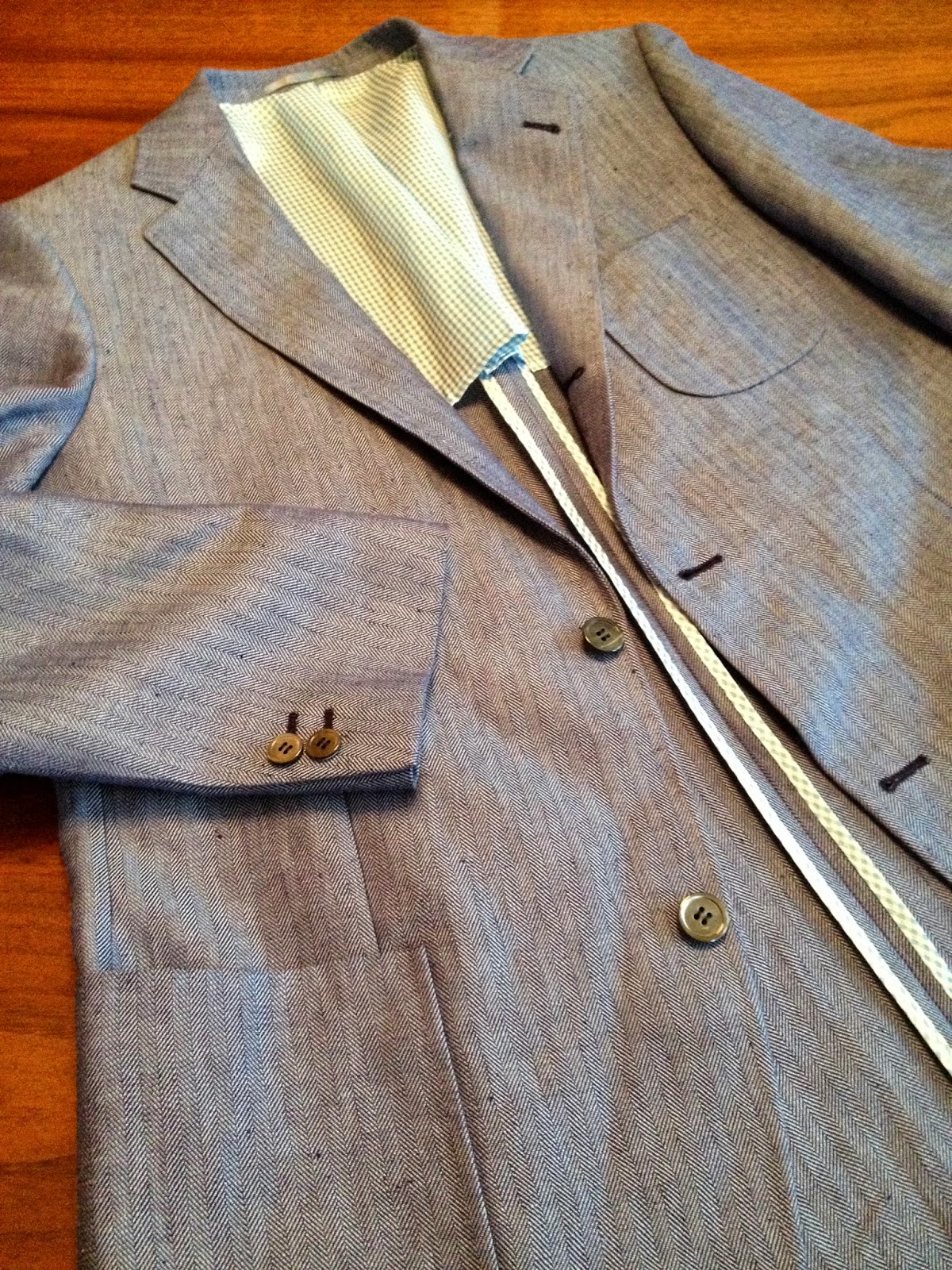 The world of so-called "online custom" has exploded in recent years, and as a lover of fine clothes who is also a consummate cheapskate, I want to believe that while this is in no way the same as real bespoke, that someone will hit it well enough that it could at least be a viable option for well crafted clothes made of good fabric at a price that is at least imaginable for many men. A few months back I was contacted by Knot Standard about doing a review of one of their jackets, and decided to give them a a go. Despite my less than glowing experience in the past, I really want to believe that this can work if you know how to pull it off right.

Knot Standard's ordering process is like many others in that it asks you to input a very specific set of measurements in order to cut a "pattern" from which to make your garment. If I've learned anything from bad experiences it's this: you can't measure yourself properly, and neither can your significant other. This time out, I wrote down all the measurements they asked for and had my tailor take them for me. This not only ensures a more accurate and impartial set of numbers, but in a way gets closer to actual custom, in that a professional took my measurements, even if he wasn't the same person who made the final garment.

Within five weeks or so of placing the order, my jacket arrived. I chose a cobalt blue 100% linen fabric in a slubby herringbone weave by Holland and Sherry. Upon opening the box, I was immediately impressed. The cloth was high quality, the construction was excellent, and all my specific detail requests were met exactly, in this case: 3/2 darted front, natural shoulders, side vents, three open patch pockets, two button surgeon cuffs, and a partial lining. See below: 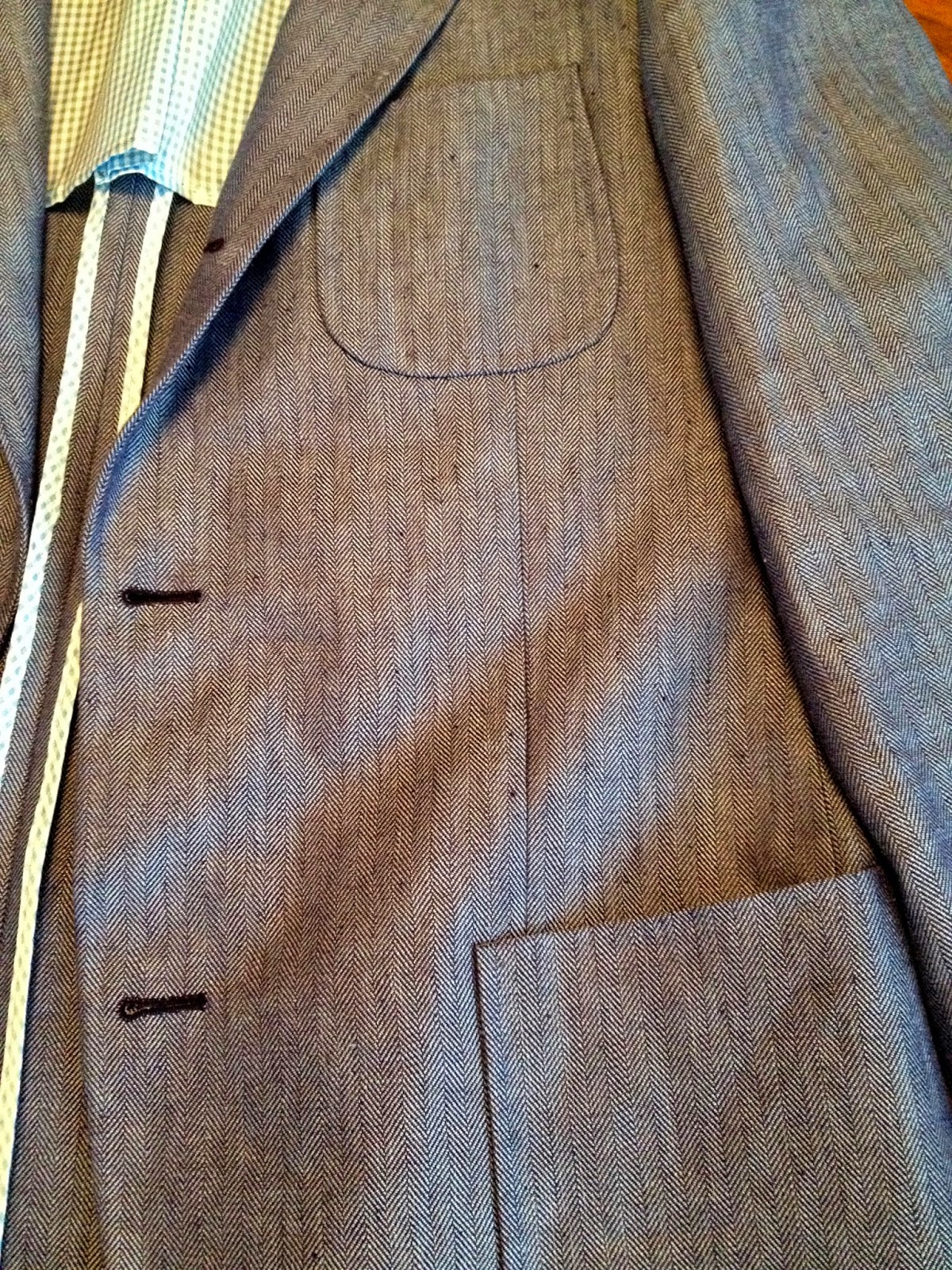 Note the correct "old style" button placement, with a high top button in line with the breast pocket. 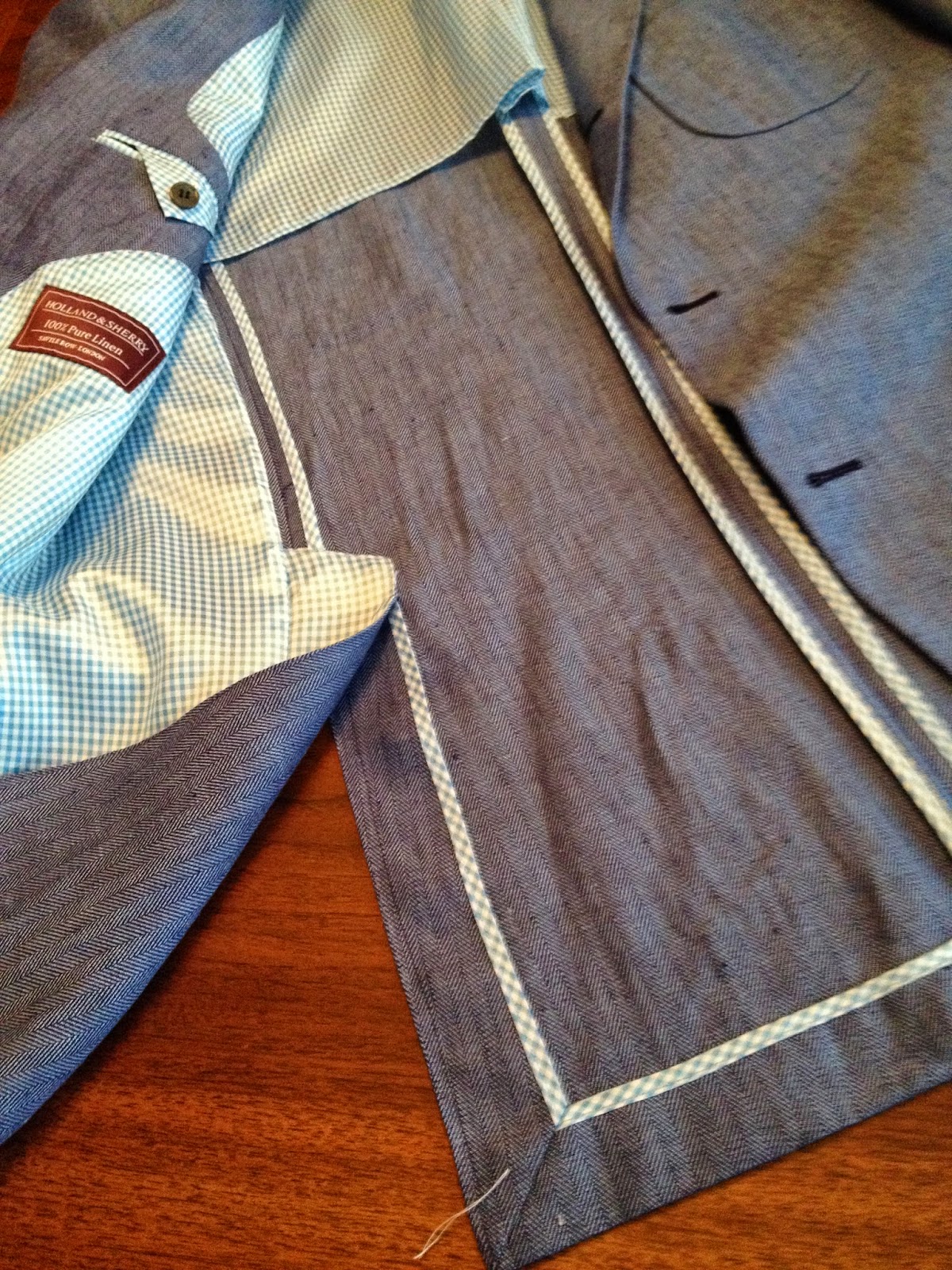 Blue and white gingham bemberg lining is a plus, as well as properly taped exposed edges. 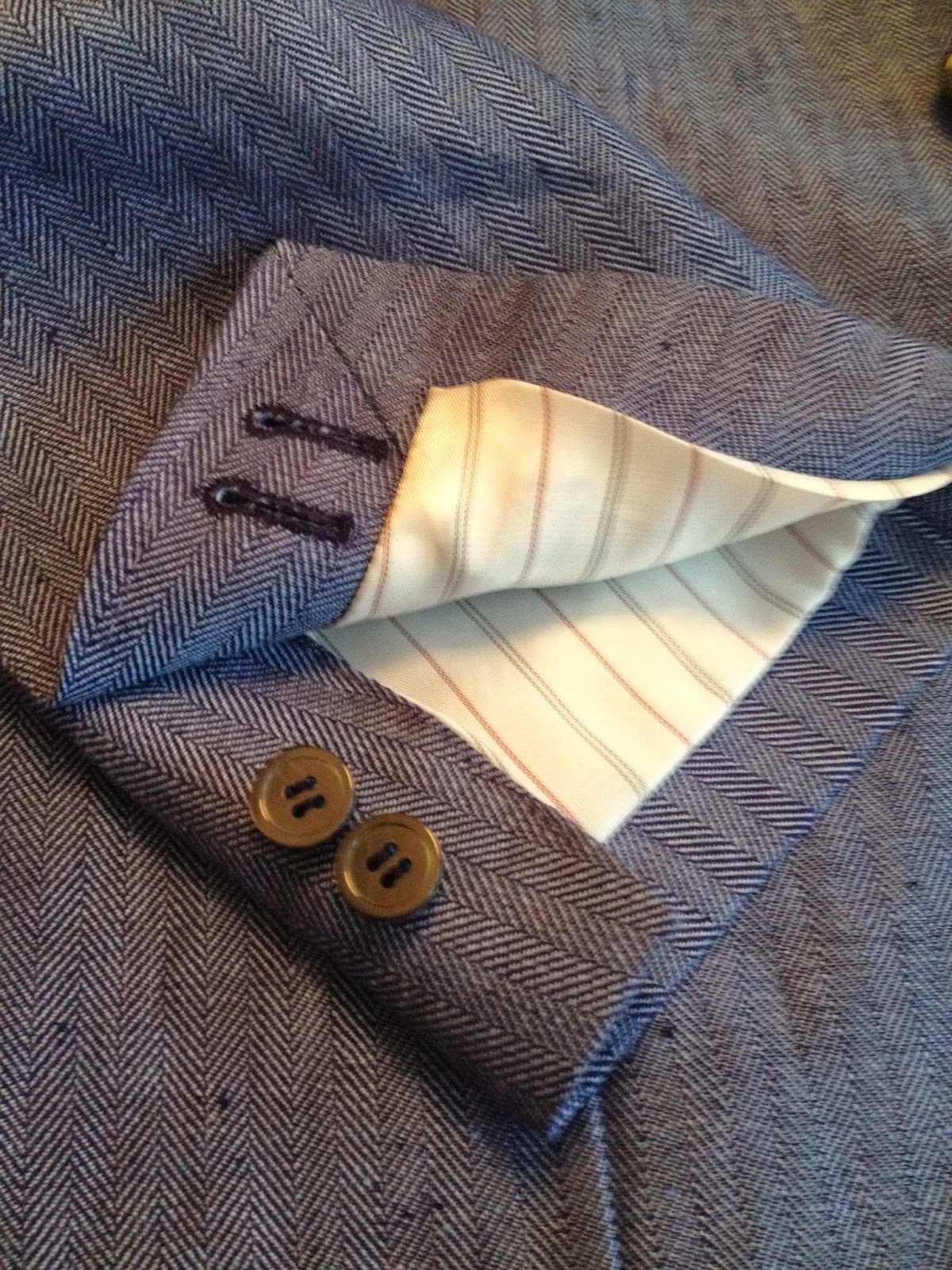 A two button surgeon cuff is more than a bit unusual, but they did it, and did it well at that, no questions asked. Check that slub.

As for fit the jacket was very close. But the only troubling thing was the fact that the shoulders were a whiff too tight. Not much, but enough to be a thing that would prevent me from wearing this jacket much.So I contacted my man at the place and told him. At first, he asked that I consult a tailor and offered up to $75 to cover alterations. I replied that the shoulders were just too tight, but added that as this was a gratis garment I didn't want to be greedy and demand a remake. My man than replied that this was nonsense, and of course they would remake my jacket to fit. His only regret was that it will take an additional 4-6 weeksto complete the task, and that by the time I receive that second jacket, Summer will be over and it will be too late to wear it. 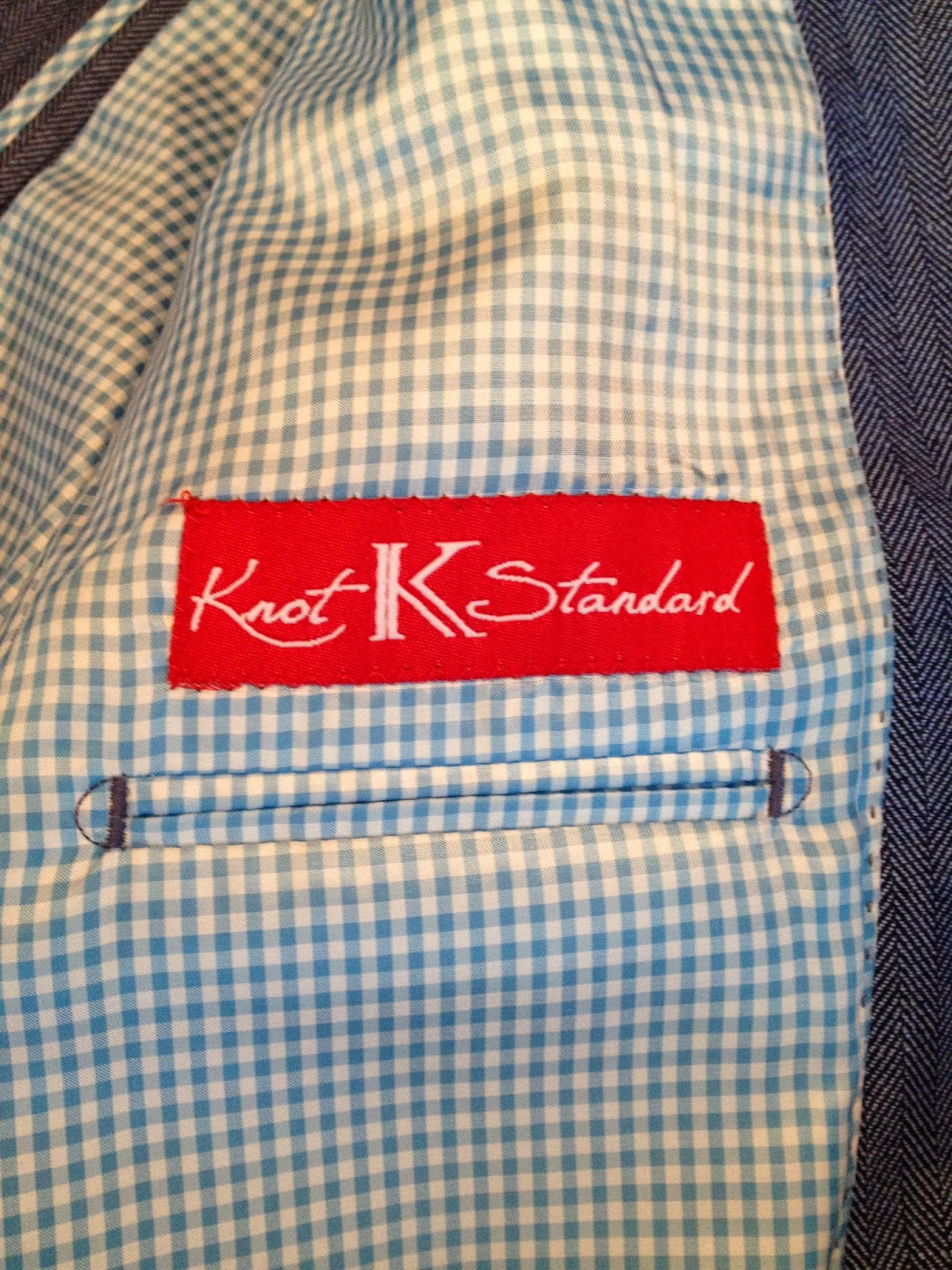 The price of this jacket would have been $395. That's no small change for a cheapskate. However, this jacket is extremely well constructed of excellent fabric and was delivered in relatively short order. That jacket you might get in the store at Joe Banks or Mens Wearhouse for that same price? This is miles better. And while I did have fit issues, customer service and communication have been great with these guys. So far, so good. Can't wait to see how the replacement works out.