Rules of Thirfting : A Law of Averages 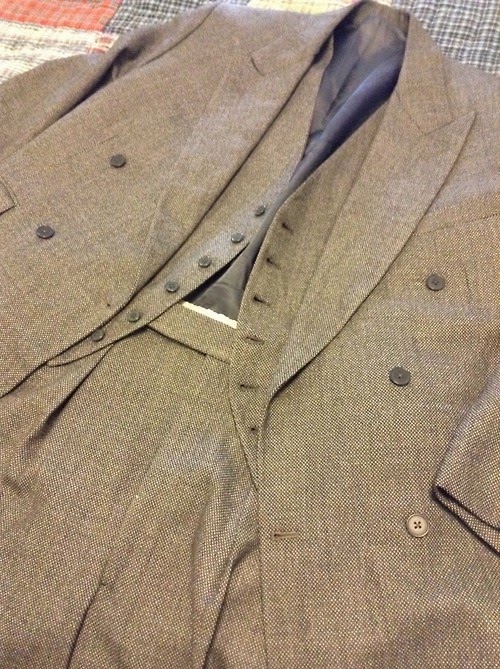 Thrift shopping, and living cheaply most of the time, is something of a game without rules. There are so many vagaries to contend with, and so much chance involved that the only "rule" that's true all the time is that anything can happen at any time. After a while, you learn to see the big picture as something of a law of averages.

The suit pictured above is my own most recent acquisition. Very dressy, perhaps even a whiff out of character for me, but until now I had never seen a double breasted three piece suit in the flesh. It's like a unicorn, the stuff of legend, seen only in black and white movies. Rendered in heavy but soft nailhead flannel and replete with 1930s details, made custom for someone in the mid-90s in New York by Alan Flusser, at $100, I simply couldn't resist.

The suit will need a bit of alterations, but there's no hurry since it's a winter cloth. The alterations it does need are a little unusual though. The trousers and vest fit perfectly, and the sleeves are just the right length, which is good as it has surgeon cuffs (working buttonholes). The odd thing is that despite the trouser waist being just right, the jacket waist needs to come in, and despite the inseam and sleeves being just right, the coat needs to be shortened by a half an inch or so. The waist is an easy, common alteration, but shortening the coat will take some work and cost some money. It's not an alteration that is always possible, as you run the risk of spoiling the coats proportions, but in this case, the buttons and pockets are set in such a way that half an inch will work. The coat has side vents which are cut deep enough to take the loss of length, and because the coat is double breasted, it has corners at the front rather than the curved edges found on a single breasted coat, making this task a little easier to accomplish.

So here's how this law of averages works. While $100 may be an incredible deal for a suit of this calibre, it is well more than what I usually pay for a second hand suit. The alterations will likely cost about $100 as well. By comparison as I write this I am wearing another thrifted suit that cost $40 and needed no alterations, and my favorite all purpose navy blazer was less than $10. You simply can't expect any kind of consistency in pricing any  more than you can expect to find a specific thing on a specific day. When taken as part of an average the cost of all my clothes, this suit is cheaper even in a sense than what I paid for it. Besides, thrift shop long enough and $200 all in becomes an expensive guilty splurge on a spectacular suit, when most other people are ready to spend as much on diffusion line "Chaps Ralph Lauren" suit, or something similarly lackluster, at a place like Kohl's. Besides, there's adventure and chance involved in thrift shopping, which for the professional cheapskate is more than half the fun. And the smarmy feeling of self satisfaction that comes with knowing that you got one over on that guy who bought his cheap suit at Kohl's is kind of priceless.

You lucky dog, you! It looks amazing from the photograph. Please share a photo with us once it has had alterations and you try it on in the winter months.

My pricing comparison guideline is not to my best ever thrift score, but to what I could expect to pay at the store's absolute lowest sale price, or to an online discounter (with coupon).

If I'm beating that, especially on a rare item, by a truly significant amount, then I'm "thrifting", even if it does cost more than $9.99

Hey, it's still a deal. I thrift most of my clothes, so splurging once in a while isn't a problem.

Great advice, but something else to consider in the law of averages in determining the overall average costs are the clothes that did NOT work out...ie, the mistakes. If over time I make 6 thrift/ebay suit purchases and only 2 or 3 really work out such that they are worn, does one not have to consider the total costs of the 6 suits purchased in order to find 3 that are wearable and that will actually be used? One of the dangers of thrifting is potentially winding up with a closet full of high end clothes that do not fit quite right or are in cloths that are perhaps not to your liking. Obviously experience plays a big role in minimizing the bad purchases, as well as a willingness to make the effort to sell off what will not be used.

That's all quite true, which is why I try to keep my ebay purchases to a minimum. I much prefer to shop in person, either in thrift shops or places like my own shop.