Black and Brown, Grey and Tan

Neutral tones in men's clothing can be the cornerstone of many classic looks, and are often used to balance out some other more colorful element in the outfit. Think grey slacks with a crimson sport coat, or a white tennis shirt with outrageous madras pants. But don't forget that a whole outfit can be made entirely of various neutrals, without being boring or drab. 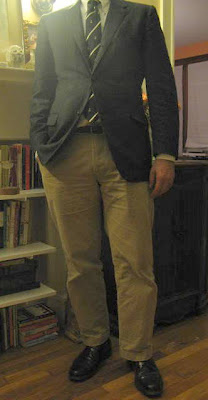 The trick is texture and fit. Basically this get-up is pretty plain: Brown shoes, tan pants, white shirt, black tie, grey coat. But each element has a little something to give it interest. 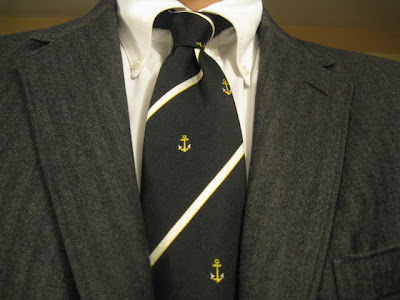 The jacket is herringbone, with nubby brown leather buttons. The ties pattern is simple, but both the stripes and the anchors are embroidered rather than printed. 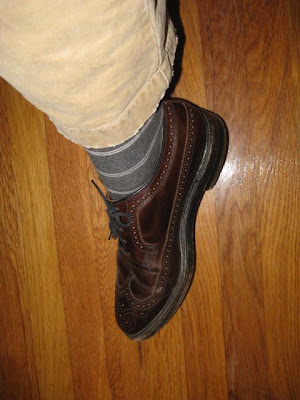 The pants have a little bit of wrinkle and fray, the shoes are brogued and the socks are striped. In fact, the white shirt, in this particular context, is the only plain element, fulfilling the 'balance' role mentioned previously. I find this sort of idea works best in the colder months, when tweed comes into play, bringing an extra dose of texture to the coat.

Returning readers will note that the jacket, shoes and chinos in this particular combo have made several appearances here. I have a lot of ties, but not all that much of anything else. Let that be a testament to well selected, versatile, time tested classics.

Quiz: Is this tie American or imported? How can you tell?

I'm guessing the tie is imported. I'm basing it on the direction of the slant of the stripes

The tie is English.