I've never really been much of a sneaker guy. I wear shoes almost all of the time. But there is something to be said for the simplicity and style of the classic Converse Chuck Taylor All Star. Every couple of Summers, I pick up a low cut pair in natural canvas. I find them to be comfortable and stylish, good for the beach, and even workable with a shirt and tie, if you do it just right. I treat them almost like boat shoes. They go great with crisp khakis and a navy blue tennis shirt...not a bad outfit for a trans-Atlantic flight, and comfortable, too. My current pair saw the end of its run this Summer, so I'm due for a fresh pair in May. Then I find these: 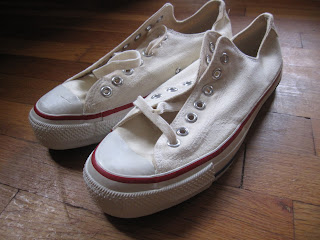 New Old Stock, never worn and clean as a whistle, in my size, $9.99 at an undisclosed thrift shop. Better still... 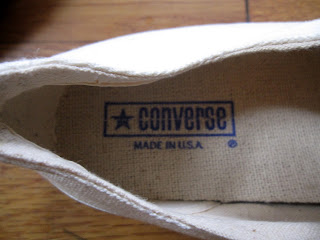 They're the real thing, made in the USA. Cursory homework reminds me that Converse moved production of these American classics overseas in the early twenty-first century, so this pair is ten years old, or so. My educated guess,judging by the logo on the insole, is some time in the 80s.

I grew up wearing these. Mostly, in the old days, I opted for black high tops, with a brief foray, along with everyone else in the early 90s, into the fluorescent colors. My mother would take us to the nearby outlet store for a new pair. You could get them for $15. What other sneakers would any sensible Mom buy her two boys? As a bonus, they were even in style, so we didn't complain.

I remember when they moved production, and were eventually acquired by (gasp!) Nike. At the time, I was heavily involved in my own Rockabilly infused version of Punk Rock, and I found this news to be quite disheartening. In the Summer I wore these, in the winter, Georgia engineer boots. I actually read about it in Maximum Rock N Roll.( p.s. as a drummer, I always found it downright tacky to have a front head on the bass drum with the drum kit logo on it. So not punk. Always get a white one and paint your bands name on it...c'mon, kids, really) As the years went by, I stopped wearing them for a while, but I eventually returned. One thing I learned from Punk Rock was the importance of principles. One thing I learned from life was how to pick your battles. I buy every damn thing I own second hand, except underwear and natural canvas Chucks. Nobodies perfect. Still, for a grown up who used to listen to Suicidal Tendencies (all I wanted was a Pepsi, but she wouldn't give it to me!), this really is the perfect Summer shoe.

As for comparison, its clear this pair is far superior to my post USA pairs. The design is practically the same, and the production fairly similar. The differences are all in the materials. This pair is made of cotton canvas, as opposed to partially synthetic canvas. The ventilation eyelets on the side actually line up shoe to shoe, and the insole is also cotton canvas....far more forgiving and comfortable to my sweaty sockless foot.

But these shoes present me with a minor dilemma. By now, they're a collectors item, practically a museum piece. I could probably sell them on Ebay tomorrow to some Japanese fanatic for nearly a hundred bucks, but I won't. The hoarder in me feels compelled to preserve them. In truth, I'll likely just wear them for two Summers until they fall apart. 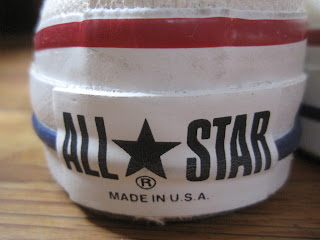 In other words, I intend to give this piece of Well Curated Authentic Vintage Heritage Brand Americana the life it was meant to live. I intend to wear them to death.﻿
Posted by Giuseppe at 9:53 PM

I remember Suicidal Tendencies AND American-made Chucks. What a great flashback - and a good deal.

I do love the Chucks but this past summer I went with Jack Purcells and was pretty satisfied. Any thoughts there?

If only you knew how many times my friends looked at each other and said 'I just wanted a pepsi'. Good times. And awesome shoes.

So there are a few of us former hardcore kids that frequent your site and have been trying to figure out what band you were in before. Figure the easiest way to find out is to just ask, what band were you in?

I still break out the Suicidal every summer. Along with Dag Nasty and the Descendents it is still a great soundtrack to summer. Alas, the leaves are changing and time to move on to the best time of the year.

keep up the good work.

Even Chinese-made ones are treasured by those of us who would be caught dead in any other brand.

"All I wanted was a Pepsi"

--that one made me chuckle, sir. Keep up the good work.

You should open a store.

The real thing! How cool is that? I remember a time when every Chuck was "Made in USA". Back in '84 I was one of the first skateboarding guys in my school wearing Chucks (ok, Germany was always a little behind). They did cost 100 German Marks, what was a hell of a lot. Nowadays, the asian made version costs around 50-60 Euros. Again a hell of a lot for today's questionable quality.

By the way: I still do love my Sk8-Hi Vans. And my old 7 Seconds, Minor Threat, Judge, Gorilla Biscuits, Black Flag, No For An Answer and Youth Of Today records. To name only a few.

And the bidding starts at $50... Damn, brother that's an awesome score. And the jams bring back youthful memories. Good times.

I see the kids in converse again and I'm jealous--I just don't think I can get away with it in my mid-thirties; however, I love your post, and maybe I can reconsider...

I grew up in the 50's.
I've never liked All-Stars and never wore them. Always looked like a little kids shoe and who wanted to look like a little kid!
Jack Purcell was my gym shoe (that's what we called them back then) of choice.

I would buy your normal new pair or two, and save these to wear on "occasions", like all "good shoes"

Yes, we called them sneakers and gym shoes. What do today's sweatsuited so-called students call them?

I'm curious at how much longer the sole lasts on these. My asian chucks always wear thin at the heel in like two months. Then I put in one of those gel heel inserts.

Anon asked: "... What do today's sweatsuited so-called students call them?"

Dress shoes. For when the flip-flops are too casual.

At one point, Giuseppe posted a picture of a jacket on which he'd painted his band's name.

He was "Joey from Somerville" in that band. I saw them play in about '99.

"What do today's sweatsuited so-called students call them?"

I think the young'uns also call them, for some inexplicable reason, "kicks."

Are they confused when they hear the lyric "get your kicks/on Route 66," I wonder?

Perhaps I should say if they hear that lyric.

I loved the black, high-top, USA-made Chucks I wore back when I was a punk rock chick! I'm an old fogeyess now and the shoes are falling to pieces, but I've still got them in the back of my closet. I'll never throw them out. Thanks for the memories.