Finally, some weather a man can dress for! And not a moment too soon. My closet is brimming with things that have been on hold these many months. A few of them, old and new, made their debut today: 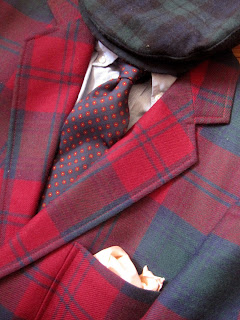 Tartan blazer, British made,  from the English Sports Shop of Bermuda, generous gift; USA made Brooks Brothers oxford, $4.99; necktie by Rivetz of Boston, received in trade at the Top Shelf Flea last Spring; Black Watch hat,made in USA, by Pendleton, purchased at a close out sale; pale pink silk square, one of the last things I bought at Filene's Basement before it was turned into an urban blight producing hole in the ground.﻿ Nailed down with vintage charcoal worsted slacks (can't remember what they cost, but I'm sure they were cheap) and Florsheim Royal Imperial wingtip brogues. 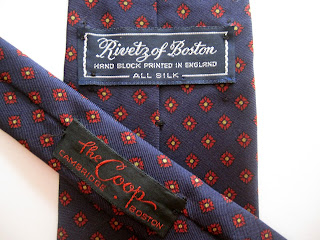 When I worked at Simon's Copley Square, we used to get ties from Rivetz of Boston with our own label on them. If you can still find them, these ties were perfect: 3 inches wide, in hand block printed foulards or repp stripes, all English silk. This one belonged to "The Coop", probably some time in the mid to late 80s, when they still had an outpost in "Boston Proper", as we say around here. Follow the link, it's an old company with an interesting history. In the late 60s, some guy named Ralph was the regional New York rep for Rivetz. Apparently, he went on to become hugely successful, or something. 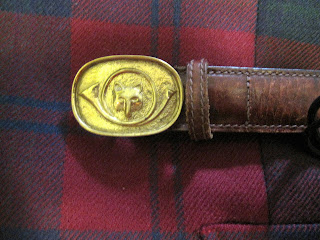 I picked up this belt with a fox and horn buckle back in June, but the hunting theme just doesn't ply well in Summer, so it got shelved. In conjunction with two kinds of wool tartan, it's just the thing. 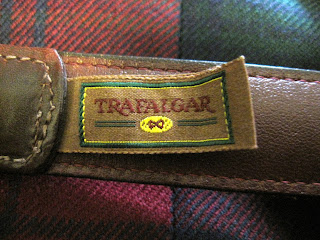 We had a beautiful sunny day that topped out at about 62 degrees, followed by a clear, crisp night in the low 50s. All day long, people complained about the onset of cool weather. Because in Boston, complaining about the weather is a revered pass-time. But not me, I love it. Any peacock will tell you, it's a lot easier to over-dress when you're not sweating bullets.

Amen brother! Thanx to AAAC trad thrift shop, and SteinMart, I now have nine cashmere sweaters, average price about $28, and I'm ready to put 'em on.

Not the world famous Giuseppe score, I know, but pickin's are a trifle slimmer down here.

It's still in the 80s here. I wore a linen shirt yesterday. Oh well, soon enough I'll be complaining about the cold.

Beautiful elements! Thanks for sharing.

Can you answer a question for me? When I left Boston fifteen years ago, there was Filene's, Filene's Basement, Jordan Marsh and Jordan Marsh basement in two mammoth department stores. What is in each of these spaces now?

That buckle is incredible. What's it's dimensions/make? Any details on the back?

There's a Macy's in the old Jordan Marsh spot. The Filene's building across the street is just a facade, with a three storey deep hole in the ground the size of a city block behind it, surrounded by chain link fence. Absolutely shameful.

It's a small buckle, only about 1 1/2 inches across the wide part. Great with "country attire".

Dressing well is the best revenge!

More power to you!

I'm so happy that you are enjoying that excellent piece of cloth that has been so expertly fashioned into a jacket. I knew that you would not only appreciate it, but also find things to pair with it to make a great outfit.

I hope you get many years of wear from it.

That is TRAGIC about the old Filene's building! Thank you for the update. (A moment of silence for Filene's Basement)