Bells That No Longer Ring

﻿I don't get to wear a suit very often, so it's always fun when I do. Today I had the opportunity to trot out a little number that's been languishing in the closet nearly a year since I got it. 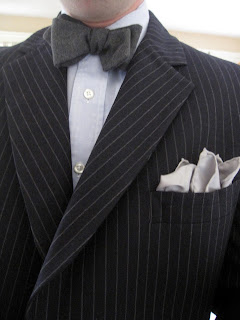 Goes magnificently with a blue point collar shirt in 80s pinpoint from the Andover Shop ($1.00)  and a handmade  bow tie in charcoal wool flannel by Miss Ellie La Veer (generous gift). A sliver pocket square (had it so long I can't remember...bought it at Filene's Basement R.I.P.) seals the deal. A bowler hat and rolled umbrella might have been nice here, but only in London. Let's be reasonable﻿. 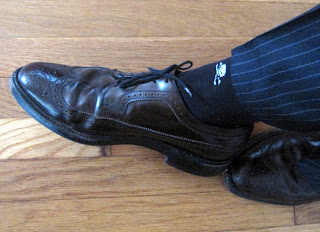 Down below I am overcome with a fit of iconoclasm, manifested in the combination of navy pinstriped suit, brown longwings and sucker punch skull & bones socks. Forget for a moment the ridiculous skulls...navy pants with black socks and brown shoes? Scandalous? Perhaps, in that it flies in the face of every "rule" you ever heard about socks and shoes and the color of your pants, but it's downright killing as well, if you'll allow me. One of the distinct pleasure of dressing well by choice is the freedom to disregard any damn rule you like. 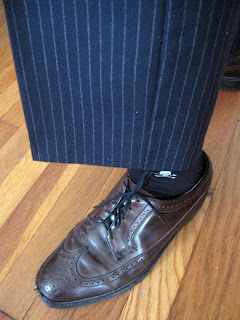 But the real point of this post is to reveal one of the "secrets of thrift", or rather to re-iterate the most important one: you can, and indeed should, have your clothes altered. Frankly, it's a rule that applies to anything you buy, but it's especially relevant to thrift shopping, given that simple problems of fit and cut, though easily correctable, can blind you to the potential of a garment.  I bought this suit because it was classic and well made, rendered in a realy beautiful fabric. But it did need help. This suit was made in the ﻿dreaded and much maligned 1970s. As such, the pants had quite a flare at the bottom. But tapering pants is a fairly simple, and cheap, operation. Simply bring tham to your tailor, explain the trouble, and ask for a narrower leg opening. These pants came down from an 11 inch opening to a perfectly reasonable and far more classic 9 inches, meaning when laid flat the opening measures 9 inches across. Two inches may not seem like much, but it's a huge difference in a leg opening. Oddly enough, the jacket has conservative medium width lapels as opposed to the wide ones popular then, and rather than having the highly suppressed waist and flared skirt of the time, it has an un-darted front. Go figure... 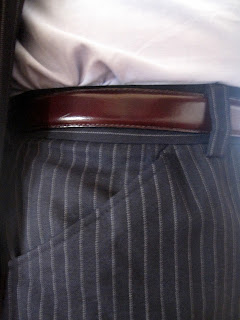 There are even bonus points sometimes, like these "top pockets", that is pockets cut at an angle more like they would be on a pair of jeans, a distinctly 1970s bell bottom detail, far from conservative. I dig it.

The 1970s may have been a garish and ugly decade, but remember that everybody wasn't running around in yellow polyester and avocado green suede doing coke in the bathroom of studio 54. Some guys were working in banks and law firms, hell, even in men's shops. And don't forget that in many ways, it was the last decade in which grown ups still dressed like they were older than children. The USA was still producing much of what it consumed and the quality of construction of these garments was top notch. It really only takes a modicum of careful editing and a good eye for potential to strike gold on something that a lot of people would consider only for a Halloween costume.

Close-mindedness will get you nowhere as a cheapskate.

Looks like a nice heavy, well-made suit there. Nicely altered too.
You're right that the 70s was the last decade when men dessed like adults. I recall my father's wardrobe from the 70s and even his leather jackets were nicely cut; trousers and shirts were the norm, even ties.It was probably also a decade when so-called style rules started to be more commonly broken.

You're bringing back some class with that suit man.Those with closed-minds can think what they like.

"Two inches may not seem like much, but it's a huge difference in a leg opening."

It is, indeed - it translates to a 50% increase in the area covered by the leg opening.

Though it has nothing much to do with clothes, i have a feeling you might enjoy Ethan Canin's Batorsag and Szerelem from a collection of stories title The Palace Thief. A good deal of the story is concerned with the social changes in that infamous decade, particularly as concerns adults and children.
I enjoy the blog.
Ricini

What a nice combo, Guiseppe! Especially digg the bow tie...and the socks. Any hints where you got them?

Picked up the socks at a J. crew outlet over the Summer.

Thanks for the tip. I'm always glad to get a good book recommendation.

Nice Suite G! Looks like you're taking an old friend out for a stroll. That suit had no idea it was going to have another life. Great job!

As it happens, I'm wearing my new thrift shop pinstripy pants. They are dark charcoal, wool, and do not have a label, but they fit perfectly. What's more-no pleats! Lots of compliments from the women at work (Mental note: Dress better for work!)

Nothing short of murder, man. This rig warrants a head to toe shot.

I suppose dark cordovan would be a better description. They're definitely brown, but a little on the ruddy side.

I love your quote, "The 1970s may have been a garish and ugly decade, but remember that everybody wasn't running around in yellow polyester and avocado green suede doing coke in the bathroom of studio 54." So many bad, polyester ensembles were made; however, you're right, some classic pieces surfaced as well. I like your bow tie -- it's not something I can pull off. I usually stick with the skinny tie, but the look works for you.

Love the suit. Navy with wine-toned shoes is classic.

I'm not a fan of the socks, though. Them dice is too fuzzy for me. No wonder ADG loves the outfit!

Good stuff all. Only someone who knows the rules inside and out can break them as masterfully as you.

And everyone take note: G is telling us how alterations can take something sub-par and turn it into sartorial gold. You have to learn to look beyond what's in front of your face and see what it can be.