After a long and relatively fruitless search, I'm glad to say I've finally found the perfect green blazer. Readers may remember a few weeks ago I stumbled on an old Brooks Brothers number.Today, it's back from the careful hands of Mr. Lee, altered and freshly dry cleaned. 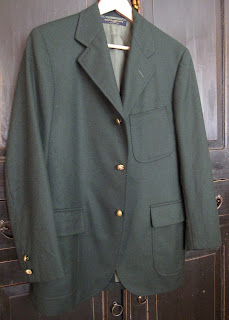 The longer I write this blog, the more I wish I had a better camera. So often, minor aspects of color and texture play such an important role in the beauty of the old tings I find, and I wish I do could do them better justice. But I digress...

As I mentioned in my previous post on the relative merits of the green blazer as an alternative to the classic navy, the shade of green is of the utmost importance. My past attempt at making one out of half a suit left me cold because the shade of green was all wrong. That jacket had a heavy brown cast that rendered it drab and frumpy. This one has a blue cast, a subdued color, yet infinitely more vibrant and workable. It combines well with most things that might normally go with navy. The power of a good dry cleaning can not be understated. When I found this jacket, it was downright crunchy with dirt. A week later, it's two shades brighter and so much softer. The fabric is doeskin, something between flannel and boiled wool, wonderfully soft to the touch and warm without being bulky. Whatever happened to doeskin? 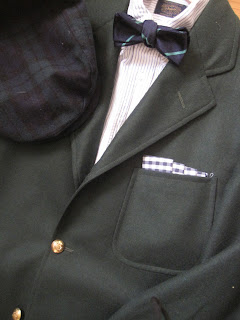 Given the fabrics blue cast, I relied on navy as the main secondary color, pairing it with a white oxford with navy pencil stripes, a navy bow tie with green bar stripes, a navy and white gingham square and a cap in Black Watch tartan. I have a lot of ties with a navy ground that I hardly ever wear. With a navy blazer, the look is too pat. Sometimes, they come out with a grey tweed. The only other thing they tend to go with is a grey suit. Now, I would love to wear suits more often. But given that I am constantly overdressed, a suit just takes things too far, even for me. This green blazer let's the navy ties come out to play more often. Cavalry twill slacks in classic tan would have been just the thing, but it ain't that cold yet. Instead, mid weight charcoals did the trick. 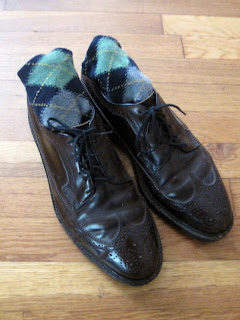 For the final touch, brown wingtip brogues and some $2.50 argyle socks from Target, one more pattern for good measure. I often hear guys say they don't get pattern matching, or can't pull it off. I say start simple, and keep your major elements solid. In this case, I'm grey on the bottom and dark green on top. Everything else has a pattern, yet the overall effect is unobtrusive because they are all in one very limited color palette (navy, white, green) and balanced by large areas of related solid colors. That, plus the tiniest bit of peacockish self confidence is really all it takes.

Thrift shopping takes vision. This jacket was nasty filthy and a little too small. The buttons were these cool scrimshaw jobbies, but all wrong for the garment. In short, though it may be vintage Brooks Brothers "346", it was far from perfect. Yet, it didn't take much to restore it to something wonderful. Dry cleaning, letting out the sides a bit, and a new set of buttons made a drastic difference. These are all simple and cheap fixes. Shopping cheap and being stylish have at least this in common: sometimes you have to see something not for what it is right now, but for what it could be with only a few well chosen tweaks. Off the rack clothing, whether thrifted or new, is frequently best viewed only as raw material. Learning to mold it to yourself, to make it yours, makes all the difference.
Posted by Giuseppe at 9:53 PM

Not related to this post, but you (and The Cordial Churchman) got a nice hat tip from Andrew Williams over at mensflair.com.

Love the bow tie! It's a batwing, right? I think Argyll & Sutherland Highlanders, long or bow, would also kill with this jacket.

Like you, I find myself attracted to navy ties, yet wear them less than I might. They really go better with gray--and green--than a navy blazer or suit, don't they?

How long until I find the perfect green blazer for myself, I wonder? Well, given what I tyro I am compared to you, I ought to expect to wait a few years.

And yet, the bargains on beautiful pieces are out there. Recently, I found a Cable Car Clothiers 3-piece suit for a song. I also found a Neiman-Marcus suit made out of Zegna material that's way too big for me. Anyone think I should buy it and try to resell it?

New York is for Haters said...

where do you wear these outfits???

Quite a nice find. Honestly, G, almost nothing fits me off the rack. I'm 5"11 with a 26" waist. What is long enough usually is way too wide, and what fits appropriately across my chest has sleeves that are much too short- sometimes too short to be let down!

Incredible frustrating, but I often view my own finds exactly the same way, and I have a habit of modifying my own garments and then literally wearing the hell out of them.

On another note, I added you to my blogroll at: http://kyotomaiko.blogspot.com, no reciprocation necessary or expected (unless you just genuinely want to).

This is a great look. I hope you will have a nice week.

There is no such thing as a "perfect green" coat. Nothing. Nothing good will come from this. Trust me. I know.

I'm already wearing it again today. Next time I see you, I'll prove it to you.

Any opines on how many sizes down a sport coat can be tailored? I picked three Brioni's made of 100% escorial wool that are a US size 50L and I'm a 46L. Perfect condition at the thrift shop for $8.99 each.

great find
have hung on to my much worn much loved brooks hopsack in same cut..
best
max

Speaking of missing-in-action fabrics, does anyone remember LLBean "cotton suede" mock turtleneck shirts? I cling to mine as a ragged winter work layer, but I'd buy more in a minute. Mine is over 20 years old, and I still like the feel. It is substantial without being stiff and fits over a t-shirt to give comfort on brisk days and used to look fine under a blazer or chamois shirt, too. If you see a guy feeling up the mock t-necks and looking disappointed every time, that's me.

Forget it. The one thing that cannot be altered on a men's jacket is the shoulders. If the shoulders don't fit, you're better off getting rid of the jackets, because no matter what alterations are done, they'll never look right.

I still love your new jacket! I disagree with ADG 100%, and hope to have a green jacket myself some day.