Secrets of Thrifting: Know When To Say No

This isn't about the work of Tom Wolfe. If you find his books at a thrift store they make a worthy purchase. This isn't about white suits, either, If I found the right one, I'd snap it up in an instant, then bring it home and hang it in the closet right beside the tuxedo that will also likely never be worn. ﻿ 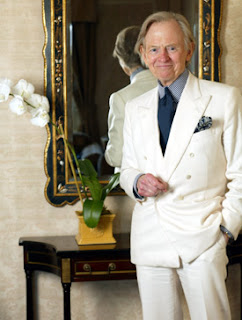 ﻿This is about the 6x1 double breasted suit, as seen here on our Mr. Wolfe. He gets a pass, because, you know he's Tom Wolfe. You would do well to avoid this style of jacket like the plague.
For those of you who may not know, here's a brief rundown of the terminology. Double breasted jackets come in many different button stances, the most classic and time tested being 6x2, meaning the jacket has six buttons, on the front, two of which are actually functional like so: 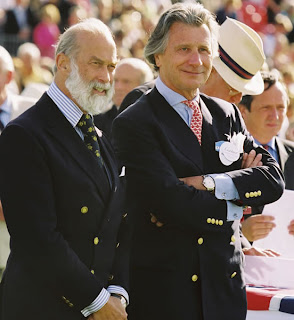 This is a style that works well on a suit, and is particularly effective on a navy blazer. Give one a try if you've got it in you. Even if double breasted jackets aren't your thing, it's pretty hard to argue with a guy like Prince Michael of Kent.
6x1 refers to the type of jacket seen on Mr. Wolfe in the first photo, with a six button front and only one functional. It's a style that was popular in the late 80s until the mid 90s, and it can stay there as far as I'm concerned. It's been my experience that the great majority of clothing available at most thrift stores is between fifteen and twenty years old, so the places are currently loaded with these things. Besides closing in an awkward spot across the hips that flatters nearly no one, these monstrosities frequently have a vent-less back (bad) and heavily padded shoulders (also bad). The pants, if we're talking suits, are always pleated, but never with inverted pleats and side tab adjusters (cool). Rather, they feature the standard office jockey style pleated pants (bad) that have fortunately fallen from most men's favor lately.
In a comment made to my very first post in September of 2008, a fellow called Charles, who turned out to be the illustrious Longwing (remember him?) had this to say:
"Thrifters have too much shit. You get used to not getting exactly what you want so you tend to buy everything that even comes close."
He makes a good point. It's easy to get blindsided by cheap prices in a thrift store, and wind up with a bunch of junk in your house. In a sense, you have to be infinitely pickier in these places than you would paying full whack in some nice shop where a modicum of quality is to be expected. In the wine shop where I work, we carry a selection of wines by the front door for twelve bucks or less.I tell customers all the time that we're probably pickier about what we choose for the bargain bins than anything else in the store. It's easy to get a great bottle for $40. For $8.99, there's a lot more crap to sort through. Get it?
So what's this all got to do with the dreaded 6x1 db jacket?
Just last week, on a hunter/gatherer mission I came across two suits made by Oxxford of Chicago. The construction was as great as you'd expect from a high end maker like Oxxford. The fabrics were beautiful, soft to the touch, one navy with pale blue stripes, the other, a muted glen check in a dark tan. Of course, they were painfully cheap. They were too big for me, but I considered picking them up for the shop. In the end I left them behind. Both suits were cut in a vent-less 6x1 style, hopelessly dated. Don't get me wrong, I put them in my shopping cart and schlepped them around the store for a while before I finally admitted the truth: even though they were made of such nice cloth by such a well regarded manufacturer, these suits weren't going to flatter me or anyone else.
Sometimes, frequently, you just gotta say no.
While it's true that I tend to favor a single breasted jacket and plain front pants almost exclusively, double breasted jackets and even pleats have their place. Just be sure and keep it classic. Remember, the styles of the mid eighties were just as bad in their way as anything we saw in the mid seventies. In both decades, classic clothing was still available for the man who cared, but the perils were great. Be careful. 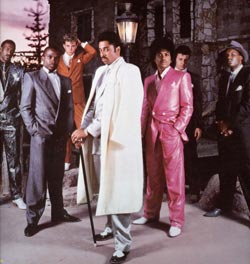 This is why I love an affordable wardrobe! Thrifting helped me tremendously developing my own taste and an eye for quality at my own pace. You could probably do the same thing in a department store but then you'll be hassled by sales staff. Thrift stores leaves you in peace to explore at your own pace. After being exposed to thrifting long enough you're drawn to the most odd garments you would never otherwise consider.

Damned gracious of you to bestow a pass on Thomas Wolfe. I'm certain he appreciates the leniency.

good advice; in thrifting as in life...

G-
Great quote from longwing! and I agree for the most part.

Having said te trouble with generalizations like this is that you leave out so pretty big exceptions.

The vast majority of 6x1s are crap (alhtough for that matter the vast majority of sportcoats at my thrift stores are crap) but there are a few decent 6x1s.
It was uncommon in non-80s and 90s decades, but did exist, and there were makers who used the 6x1 pattern with the other details more traditionally.
(You can also convert some 6x1s to 6x2s).

I used to be an ultra-discriminating thrifter, only the EXACT thing I was looking for would work, but reading your site has dulled that instinct in me.
I've actually found that some stuff I picked up on a whim, or not knowing how to wear has become the most used stuff in my wardrobe.

There's a balance and I'm not sure how to strike it, but I'm sure it exists.
-Joe

I occasionally thrift something that is not a perfect fit, but too fantastic to leave behind. However, I always wear at least once and/or alter.
Then turn it in at Buffalo Exchange or the like, ebay, give to a friend or it's back to charity.
As long as it doesn't gather dust in the closet, I'm cool with wearing once/cycling through stuff when it only costs a few bucks.
Bur it's a lot easier to move around women's clothing in this manner.

Out of curiosity sake, how large were these Oxxford "throw-backs"?

Always enjoy your blog, happy holidays to you!

I agree with you about the white suit; I've got a linen one, bought new about six years ago, that I will never ever wear, but I think I can see you in a dinner jacket. It doesn't have to be the Oscars, or an industry dinner at the Dorchester; we usually wear black tie for extended family dinners on Christmas day and New Year's Eve. And, of course, a dinner jacket is one thing you never buy new; my oldest son has just gone up to Cambridge with one that was made for his great grandfather and worn, along the way, by me and my father.

And now I'll have Jungle Love stuck in my head for the rest of my life. Oh eee oh eee oh.

Where else but here will find Tom Wolfe, Prince Michael and Morris Day all used to illustrate the same point?

Yes, many 6x1 double-breasted jackets from the 80s are unwearably dated, yet the look, properly done, is a classic.

I speak, of course, of the stroller. You nemesis wrote about it recently, and it seems to me that a stroller is significantly more useful, if not as beautiful as, a cutaway (aka morning) coat.

If you got a charcoal gray suit with a 6x1 DB jacket, it could easily double as a stroller at, say, weddings. If the jacker were cut, as the Duke of Windsor's were, to roll to either 6x2 or 6x1, you could do any look you wanted.

Then again, a single-breasted jacket with notch lapels is equally correct for a stroller. Unvented or two vents, with besom (aka jetted) pockets.

Well, a fella can dream, can't he?

P.S.: Love the last picture. So cool then, so awful now.

Your sober, matter-of-fact post should be heeded by any thrifter who always finds himself leaving the shop with an armful of stuff.
In my experience too it's easy to get carried away and buy six garments, of which only one or two will see any kind of real wear.

In a thrift shop you tend to look less discerningly in the mirror than you would at home. Also spurred on by the fear that someone else will snap up a coat/shirt/trousers if you so much as lay it down before making a decision.

I no longer have fanciful ideas about alterations - a little sleeve-work yes, but to consider shortening/lengthening of tails and taking in at the back, it would have to be a really desirable garment.And fit is king.

"...the fear that someone else will snap up a coat/shirt/trousers if you so much as lay it down before making a decision."

On more than one occasion, I have had people pick up my hat--the one I bought elsewhere, was wearing when I came in, and put down for a moment--and start to try to try it on. I stop them before they can, telling them that it's my hat. They're usually good-natured about it, but....

Be careful, or the other thrifters just might make off with the clothes on your back!

One question - can a 6x1 be modified to look like a 4x1? If one removes the top 2 buttons, can it pass for that much more elegant garment? The Duke of Kent certainly looked spiffy in his.

A proper 4x1 still has the "keyhole" distribution of buttons (meaning that the top buttons are spaced further apart than the lower ones). A 6x2 modified to a 4x2 will not be as flattering to the majority of men as a 6x2 or 4x1 configuration.

You could wear a 6x2 modified to 4x2 with only the bottom button buttoned to minimize that effect, but the jacket probably wasn't cut for that, so it won't look right.