Boy has it been grey and dreary around here these past few day. That hasn't stopped me from changing  over the closet though. As I look forward to the full blast warmer months, I picked up this new find at the cleaners today: 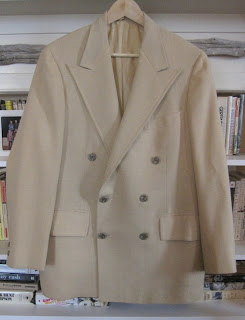 Lately, uncharacteristically, I'm really digging on the idea of the "just right" double breasted jacket. This one here is the perfect conglomerate, taking elements I don't usually care for and combining them with those I do...kinda seamlessly.  The trouble I often have with double breasted jackets is the built up shoulder, but this piece has natural shoulders, even if it is darted. 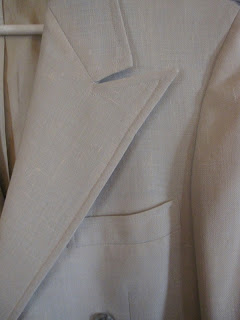 Swelled edges, a very Traditional touch, yet the lapels are fairly wide. That's all well and good, if you ask me. Narrow lapels on a double breasted jacket are an aberration, anyway, the proportions never seem to work. All those buttons require a bit more heft up top for balance. The cloth is likely a cotton/linen/synthetic blend, tres 1960s, with little flecks of white to play up the "linen"ness of it. Of course, wrinkles would play that up even better, but I'll give this one a pass for quality of construction, cut and a perfect shade of khaki. 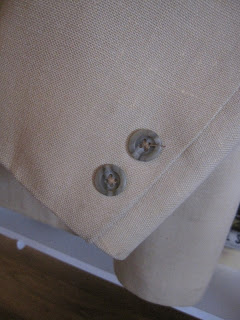 The two button cuff, so quintessential on our beloved 3/2 undarted jacket is a pinch unexpected here, but I'll take it. It's even got a center vent, and being from the 1960s, is cut a hair on the shorter side, which surprisingly gives it a fresher, more modern feel. 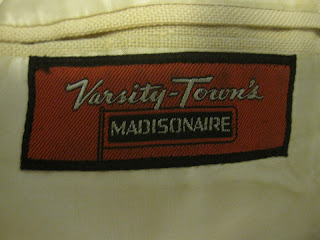 A "Madisonaire" by Varsity Town...sounds pretty fancy.I'm supposing that the "Madisonaire" label and the double breasted cut would suggest that this coat was meant for the city, a bit more urbane, as opposed to something like a tweed sack, which would be strictly campus casual. I couldn't find much on the Varsity Town brand, shy of this old ad, but they do seem like my kind of manufacturer. The Ivy League nuts must love that label. Incidentally, with "Ivy" clothes being something of a rage right now, I think someone should release a line called "College", and sell nothing but blazers and striped ties. There's a gold mine there. The kids love that stuff.
This jacket will be the kill with tropical worsted flat fronts in charcoal grey, white shirt,maybe even with (gasp!) a button down collar, black knit tie and brown suede shoes, light colored socks and a straw hat for good measure. Mark my words, kinda like this guy: 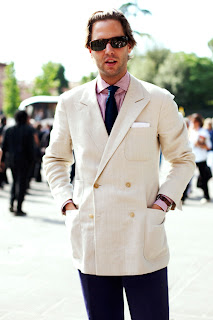 photo: the Sartorialist
True, this guy is in Milan, an his jacket more than likely does not consist of partly synthetic cloth, and that open patch ticket pocket is hard to beat, and his jacket probably cost more than most of my clothes combined,(mine was $4.99) but the concept is largely the same. (Minus a few points for the old watch-over-shirt-cuff-trick. I thought that was silly, even on the great Agnelli. Leave it to the Italians to always be at least one step overdone, myself included)

I think it's about time for a well cut double breasted jacket to make an occasional comeback. Like forward pleats, the fashion industry has been vilifying them for long enough now that they're bound to start speaking the opposite anytime now. I might be ahead of the pack with this one, not that I tend to care much for the pack and what they think. My fear is that creased jeans are the next big thing too, maybe this Fall. I won't be jumping on that one, even if I did call it.

In any case, think about giving a double breasted jacket a try. One or two in the closet is just enough to provide a shot of interest that ups your whole wardrobe.
Posted by Giuseppe at 7:03 AM

I would think you'd want to stay away from a button-down collar with a DB jacket. There's absolutely nothing wrong with doing things your own way, but that combination has always looked just wrong to me. Surely you must have thrifted a point- or spread-collar shirt or two?

I look forward to a photo of you rocking this jacket!

Center vent?! Solid lapels sans button holes?! That thing's a train wreck. Looks like Boris from Estonia wore it in 1977 while he and he his brother were chasing wild American girls with big breasts.

DB should be side or closed vent. Never center. And each lapel should have a button hole for balance. The goods are all wrong as well. But who am I...It might suit you.

Right on all counts, and I'm guilty as charged. It is a train wreck, and ,I shouldn't like it...but I do. You know how that can be sometimes. Then again, I had the same gut feeling about a certain green double breasted monstrosity last year, and that ended in disasiter. We'll have to wait and see. If only the weather would creep above 50 I might get a chance to try it out.


As for the vent rule, I've heard that before. Trouble is, most of the vintage db's I see have a center vent, even though every one says they never should. Who knows.

Boris, by the way, was a real lady killer. One look at his gold tooth and the half empty bottle of Henessy under the front seat of his Yugo and the girls would just melt.

Hey,
Long-time-reader-first-time-poster.
I'm a big fan of DB's myself, and recently snatched up a green Brooks DB suit that also had the center vent thing. A little wonky, but the color and cut more than make up for it.
Giuseppe-I was wondering-You said that you got this at the cleaners? As in, something that somebody never came back for?

The people that the (overrated Sartorialist) shoots could get away wearing bin bags. Why take one of his pics to justify a purchase. If you like it, wear. Even if no one else would. SAM

Bought it at a thrift shop, just had it cleaned.

Children who use "rock" as a transitive verb ("rocking a jacket") as well as those who use "Hey", rather than "Hi" as a greeting, should be banned from any adult blog.

There are those who might feel that people who are easily enough offended by mild bits of modern slang to suggest a ban on somebody should take it easy.

Also, "rock" may well be used legitimately as a transitive verb (rocking the boat).

But, you know, thanks. You really made your point.

I'm looking forward to seeing what you do with this.

As for double breasted suits, I thrifted one that is unvented but has no lapel button holes. I decided to hem the pants cuffless—and together, it works.

Sometimes, a little different is good.

P.S.: You can get away with button-down collars with DB suits, but you have to know what you're doing. I wouldn't do it with the one I have, but Fred Astaire did it all the time. However, I think he only did it with DB suits made of a richly textured cloth; in contrast, my DB is just a sheen away from sharkskin.

I'm not sure what it is: nerve, sartorial savvy or a good tailor, but DB jackets are hard to pull off without looking portly or old-fashioned.

They last worked when the Italian cut came round in the 80s. I wore a DB suit to a wedding when I was sixteen and it worked. Since then it has always failed.

I like yours, the buttons are fairly tight in the middle (I hate those with the widely tapering button stand). Test it out in a cocktail bar on a sultry evening, and post the pictures.

Johnny Ola in Godfather II, I think... In the Cuba scenes, or maybe John Cazale. That desperate look anyway.

Just found a Zegna madras,linen DB jacket, must be a real rarity.