Last Friday, I was a participant in a discussion on the meanings, past and present, of so called "preppy fashion" following a performance of A.R. Gurney's play Children. I can be seen below pontificating on the matter, speaking with my hands as any self respecting Italian would. 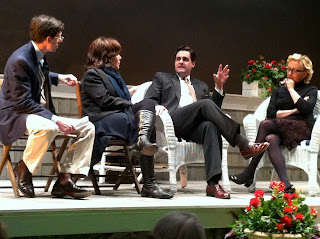 photo credit: a friend in the audience
I'd like to thank the TACT theatre group for inviting me to be a part of this. I had a great time, and met some wonderful people. As for the play, I say two thumbs up. A single scene on the terrace of a Cape Cod island beach house sets the tone for this sad yet darkly humorous tale of the unravelling of an old WASP family in the early ﻿1970s. The cast of four played it to the hilt, making us feel both contempt and compassion for each of them, and in the end, everything works out for the best, but not in the way one might expect. Go see it if you can.
In other pontifications:
Sadly, the comments in my last post became a soapbox for racist vitriol by a number of anonymous commenters.  I don't intend to ignore this. As much as I'd like to keep this clothing blog from becoming a political showdown, some things can't be ignored. Unfortunately, I will be forced to rethink the openness of my comments policy. This is not some Massachusetts Liberal Political Correctness game. I simply will not tolerate this kind of behavior on my blog any more than I would in my own house.
Posted by Giuseppe at 7:11 AM

I was saddened by the comments of the previous two posts. I'm glad to hear that you're taking action, and I see nothing wrong with filtering the hateful things that some people unfortunately choose to share. There's a difference between honest criticism and spiteful comments intended to provoke.

Looking very sharp in a relaxed way as always!

As a constant reader and equally constant lurker, I say please do moderate, although it's a shame that this is necessary. I've been dismayed to see that for some commenters on men's style blogs, nostalgia for past styles thinly covers nostalgia for racism, misogyny and worship of wealth. It's a sad day when I'd rather read a blogger who drapes himself in black modal knits or lurex-speckled eighties sweaters simply to get away from some of the attitudes found among these types.

If traditional styles prove truly inseparable from "traditional" bigoted attitudes, I for one will give up my brogues and start wearing puffy trainers and track pants. I hope it doesn't come to that.

I totally called it: one of the commenters on LBFogey's blog (that cesspool of filth) did indeed link to that last post.

I can't believe I waded through all of his sh!t to find that out. Won't make that mistake again.

It ain't a government institution, G. Redact, redact, redact to your heart's content. It'll take a while to beat back the knotweed, but it's your garden after all, not some vacant lot.

"I simply will not tolerate this kind of behavior on my blog any more than I would in my own house."

Bravo that man! "my blog my rules" is the key here. To tolerate racism is to encourage racism. Why do people think they can get away with it just because it's the internet?

First and foremost, thanks so much for this blog! As a young professional in a business casual environment, I’m finding myself to be a not-so-business-casual kind of person (on a business casual budget). This blog has helped immensely in the identification of quality while avoiding the expected indebtedness of quantity and has also given a little confidence to take a risk here and there. In response to the cowardly commenter on your last post; what a sad little person you must be. I genuinely hope those children grew up to become great men who made a positive difference in the world. Honestly, your character and upbringing have come into question as a result of your ignorance. Guess what, they wore their hats well. Wasn’t that the point of the post in the first place? Keep it up Giuseppi! (Feel free to edit out my rant if you feel it necessary. Ignorance frustrates me.)

You look sharp, and at the same time, comfortable in what you're wearing.

Your posture reminds me of William F. Buckley, Jr.

I hope that this overtly political comment doesn't get deleted ;-)

Seriously, your house, your rules. I think you've been generous in allowing not only critique and dissent, but also some comments that are offensive. Even so, one man's offensive is another man's truth; I'm sure you'll continue to use your common sense in sorting things out.

Great blog, Giuseppe. Thanks for your quick action on those comments. Really frightening that a picture of adorable kids elicited that reaction from certain people.

Here, here, Mr. G. No reason to put up with any of that crap. Just another reason to hang out here. Thanks for the blog.

It looks like they are hanging on your every word!

Obviously LBF has friends out there, damn shame. Keep up the good work.

And because I respect your blog and your insight I will apologize for throwing lighter fluid on the flame. I just can't stand to see blatant racism especially in an "adult" setting so I couldn't let it sit.

Also, moderate away. Those comments had nothing to do with the purpose of your post and therefore had no place here.

Lastly, does it bother anyone else when a blogger you follow and (otherwise) respect had Admiral Cod included in their blogroll?

Actually, I found it an educational experience to see all those racist comments. It makes those of us who live in an ivory tower come to grips with the fact that such attitudes continue to flourish in our country.

Nice tassel loafers! They're a million times nicer than those horrible RM Williams boots on the guy on the left.

love this blog. agree with the need to moderate the comments on pretty much ANY blog. the trolls must be dealt with, and i'm sure you will deal with 'em.

A man is judged by the company he keeps. It's hard to believe anyone other than Richard would keep The Codpiece on his blogroll.

I have become an avid reader of your blog. I have learned so many things and I can say that each time I read your blog, I learn something new. I feel like I have found a new "hide-out"! The jazz that I like, the clothes that I love, the thrift that I enjoy...especially the spoils of getting the best deal! I love this blog! I check it each day (sometimes several times!)
I am proud to say that after admiring your black and grey herringbone tweed blazer, I scored one for myself at the local Goodwill over the summer for a mere $7.99 along with a brown Harris tweed blazer and a grey Harris tweed blazer for the same price...three blazers for under $25 for me is great! From reading your blog, I have essembled a truly affordable wardrobe based on thrift store finds. Thanks for your inspiration!

F. Scott Fitzgerald comes to mind when I see you in this photo!

@Old Prof: Should one ever start to doubt the reality of racism in America, I suggest grabbing a bucket of popcorn and heading over to the comments section on any major news outlet.

CNN in particular seems to draw a staggeringly vile crowd. Surprising, given their milquetoast image.