A Matter of Convenience

I'm an old fashioned guy, and I like old fashioned things. I've even gone so far as to carve out a corner of the intenet to indulge my yammerings on the matter. But for all that, I do live in the world of today, and I'm not so much of a fuddy duddy to deny it completely. That's the irony, kind of like using a laptop to connect with other people who like to prattle on about old stuff...like proper cotton shirts versus the new fangled and now ubiquitous non-iron variety. 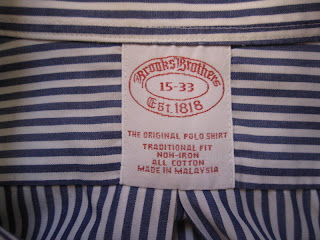 While I generally eschew the abominable non-iron shirt, I do have this one which I must admit has a way of making it into the regular rotation at least once a week. True, its made in Malaysia, and true, its treated with some kind of weird chemicals that pander to a fast paced sense of convenience above all else that permeates every crack and crevice of American society these days, but its a nice looking stripe and it only cost $5.49.  I could make the argument that the old term "original polo shirt" oughtn't be used given these modern extenuating circumstances, but I'm not so particularly hung up on minutia as some guys (see these comments, and these too. Sheesh! Do you guys enjoy clothes, or just needling others about them). 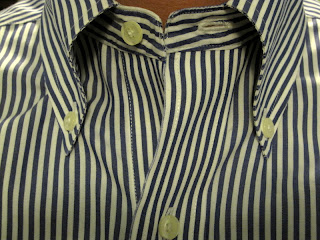 While I don't particularly care for the weird feeling finish of this shirt, I must admit that it fits very traditionally, with a perfectly rolled button down collar. After all, despite its modern cloth and overseas provenance, this is , after all, still a Brooks Brothers shirt. I reach for it when I'm in a hurry to change for work, when the kids have run me ragged and I just don't have ten minutes to iron. I gotta admit, having one of these things does come in handy for a dad with small kids sometimes. 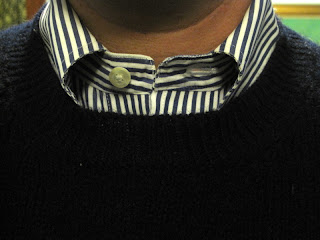 I'll admit that I am enough of a fuddy duddy to starch and iron it anyway if I plan to wear it with a jacket and tie, but mostly I throw it under a Shetland crew neck sweater with a pair of khakis, cords, or flannels, when all I really need is a bit of collar sticking out to show the world I'm not a t-shirt kind of guy.

Bowing to convenience in an occasional pinch is fine. It is only when convenience becomes the sole factor in one's decisions that abject laziness begins to creep in.

Tread lightly in the non-iron world.
Posted by Giuseppe at 9:30 PM

Because I have to wear a suit to work every day I always have one of these in the rotation. Plain blue oxford, the vanilla of dress shirts. It doesn't wrinkle and therefore I can get two days of wear out of one without washing (three if I really want to push it, my secret though. shhhhhhh)and because of it's nature, unless I spill on it, no one is the wiser.
I usually supplement with some other shirts that I have to iron, and thanks to this site the quality of those shirts has increased dramatically while the cost per shirt has decreased exponentially.

I love no iron shirts. Years ago, my husband wore pima cotton button down shirts, with suits. When ironed, the shirts felt as though they had been starched. Truly wonderful. However, I timed how long it took me to iron one - over 25 minutes! Times five, it took over two hours. At that time, the cleaners charged between $1 and $2 per shirt to launder and iron. That was nothing to sneeze at back then, but I argued that my time was worth more than that.

Randall - it may not wrinkle but does it smell on the second day?

I own a few non iron shirts from Charles Tyrwhitt and the Swedish brand Eton, and I really don't understand why you and many others use descriptions like "the weird finish" when you talk of said shirts. I don't find that my non iron shirts smell or feel very much different from so many other shirts, be they cheap or expensive.

I think every regular person has one or two non-iron shirts, probably of the better kind. This is all-cotton after all.

What draws me to a shirt more than anything is how it fits. I've had some rather pricey models that somehow fit a lot worse than mid-range models that fit so well (pure luck) that they get worn more often.

Wearing something only because it ticks a certain number of style-rule boxes is just madness. Especially if it's also uncomfortable, which is additional masochism.

Ennyhoo, that's a great looking shirt, even if it is a non-iron. Great price, too.

I agree with you about non-ron shirts having a weird feel. They also do not breathe as well. However, when I am thrifting I will not turn up my nose at one.

It looks good in that second pic.

Nah. I don't sweat that much anyway and frankly all I do all day is sit at a desk so there's no real heavy lifting involved, I find that if I air them out for a day they're usually as good as new. That said, it usually works better in the winter. In the summer it can get a bit stinky and then it's only one wear a week.

YOU HAVE ALDENS FOR SIXTY FIVE DOLLARS THAT HAVEN'T BEEN SOLD???? Yes, capslock is a terrible thing, but that is a terrific price. If they were 11D they would be sold.

And if they were 10D they'd be in my closet.