Given the fact that it's been well over a year since the last time I featured a Sucker Punch on the blog, I'd say the time is well nigh for one. This means I've either managed to avoid overtly conspicuous consumption hat flies in the face of even my own better judgement, or I've learned not to bang a drum about my shortcomings so much. Most likely the latter is true. In any case, today we make up for lost time with a double dose, a Sucker K.O. if you will. 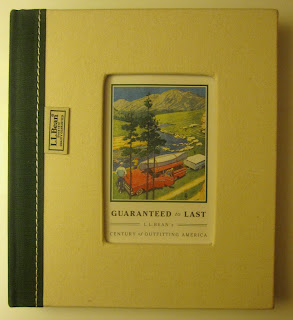 The L.L.Bean 100th anniversary coffee table vanity book arrived yesterday, because I bought it. I thought it might be fun, and it was late at night, and there were a few dollars to burn (specifically $19.12, get it? 1912?) in the PayPal account, and here it is. It is a fun book, but I won't get too far into it here. Lord knows the internet will be gushing with reviews any minute now, and I'm not going to get involved. I will only say that regret set in the minute I saw a page featuring Lisa Birnbach's thoughts on the matter. Any time the good Ms. Birnbach rears her head in connection to anything I might like I get the feeling like I should just chuck it all in and turn to stark white unfurnished rooms and black turtlenecks. But I digress... 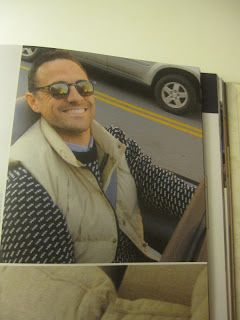 Not surprisingly, Ms. Birnbach is featured in a chapter focusing on the now iconic Norwegian Sweater, and by extension L.L.Bean in the 1980s. Among the photos we find this chap. Two days later (today, that is)... 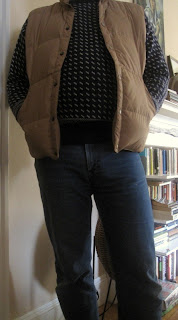 I find myself headed out to the grocery store in this get up. True, it's a grouping of items I've owned for a long time, but I can't imagine what made me think to combine them in just this way just now. 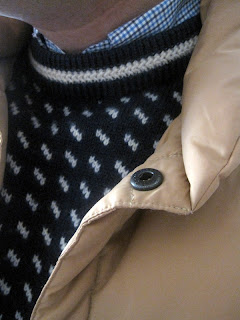 The sweater is actually from Boston Traders, also very 1980s, found in a thrift shop for a few dollars. The vest is Lands' End, $12.99 on sale in the Spring time some years ago, and the shirt is a tattered old Brooks Brothers, with holes worn in the elbows, what I call a "sweater shirt". 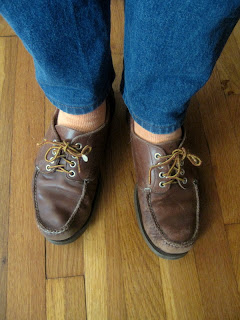 They even got me right down to the shoes. Dammit!
Posted by Giuseppe at 7:29 PM

I own more than a few "sweater shirts". Can't get that pesky stain out? Sweater shirt!

Ms. Birnbach wrote a funny-ish book about 30 years ago. That's all. Obviously, her more recent printed flop is not even considered. Worse yet, she doesn't have the courtesy to admit to self-satire. Instead, like (another) 1980's character Jason Voorhees, she implausibly resurfaces in laughably improbable settings, perpetuating the joke that it is all somehow real or even possible. That she is featured in this book tells us all something very important about current thinking at LL Bean.

LL Bean is still of my favorite companies, but this little blip of clinging to neo-prep will likely fade away when the internal team is reshuffled.

I lived in Maine for just about 10 years, ending in May of 2011. From 2006, every year the hired fewer and fewer seasonal employees and those hired worked fewer shifts. A few years ago, they closed an entire call center.

You could argue that the fade has been their fault but I don't think that holds much water. The ground has shifted drastically in the last 20 years and the flailing you see in the brand's presentation has more to do with the radically different economic playing field they now inhabit.

Things have improved for them. The prep revival has helped. (I was at the flagship in late fall and saw two what-could-only-be hipsters trying on something from Signature a size too small, natch.) What has helped more is a general return to a higher standard of dress.

Of course, much of their stock is now made overseas. But some of their products are every bit as solidly made as they ever were and the benchmark-setting 100% guarantee still exists.

I know a lot of us here are New England-bred. I feel an odd sense of proprietary interest in LL; I root for them in spite of their missteps and the waywardness of some of the later generations. That "rooting" causes me to write silly posts like this. Forgive me.

Forgive you? For what? That is exactly the sort of well put commentary I like to encourage around here.

For what its worth, I root for them too. Maine Hunting Shoes have been my only boots since childhood.

I've had my camp mocs for a year. How do you keep the damn laces tied?

What a look! And you just happened to have the outfit? Brilliant. Couldn't have replica'd it better even by stealing the clothes from the man in the photo himself.

Have to say haven't come across sucker punch but will do some research.