Finding well made classic clothing from old guard American brands is difficult enough. Turning up a vintage handmade piece from "across the pond" is nearly impossible...nearly. 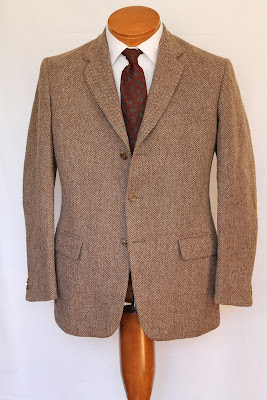 In posting new items for sale in the Shop this evening, I decided that this piece deserved its own post here. After it's sold, I don't want the memory of it to fade, it's that good. So consider this post, much like my posts on vintage formal wear (here, here and here) one for posterity.﻿

What you see here is a real tweed jacket, the kind that makes every other tweed jacket you've seen or owned seem like child's play. A real piece of British country clothing, most likely actually worn by its original owner in the British countryside. My best educated guess dates this coat in the early 1960s, but it may as well be brand new for how well it's held up. Note the tailoring. Moderate shoulders with a nipped waist and soft three button front. Not our American 3/2 stance, but certainly tailored to the center button. 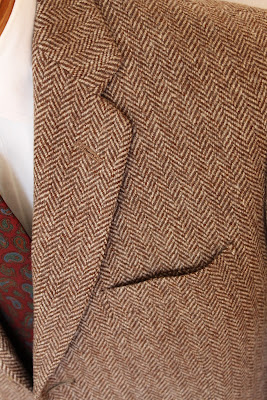 Super heavy bullet proof brown herringbone tweed, the kind of stuff you don't see anymore outside of Britain. Narrow lapels with rounded corners, popular in the early 1960s, are one of the clues to its age.﻿ 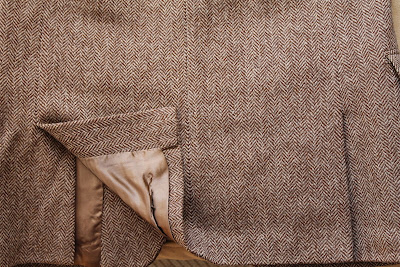 Shallow side vents are another. 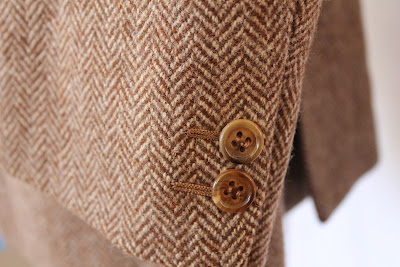 Real horn buttons. The two button cuff is a bit unusual for English clothes, but spot on for this "casual" jacket. 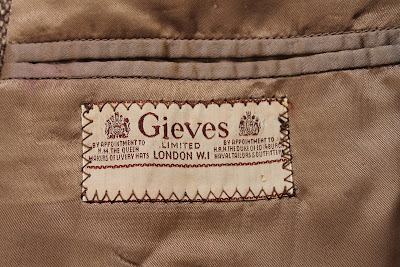 By Gieves Limited of London. The final clue. Not only does this confirm the obvious fact of this garments quality, but it proves that it was made no later than 1974, the year Gieves Limited bought Hawkes and Co. of No. 1 Savile Row to form Gieves & Hawkes. If you're a 38 short, this ones for you.

Just one of the things I dig out of that old church store in Maine. Much more of it can be found now in the Shop.

Oh man this thing is so amazingly epic. If only I were a little bit shorter... It's nothing on the level of this Gieves rig, but I snatched up a Dunn and Co super heavy Harris Tweed jacket recently. The cut of it is a pretty extreme departure from the sort of things I usually wear but I'm mesmerized by the literal and figurative weightiness of the tweed. I fear I may be becoming a bit of an Anglophile. A grievous sin for an Irishman.

Unusual that it has a maker's label outside of the pocket. So it's either ready-made (not unusual for Gieves) or it was made for export.
It's an even rarer piece now since the monolithic takeover of the Harris Tweed industry by that Yorkshire fellow. He controls 90% of the cloth and has it immediately made into jackets which are then sold round the world. Even worse is that he reduced the entire output to four colours. Only one other small mill makes independent tweed.

Whomever buys this coat will get a great garment and a piece of history.

I chanced upon a similar Gieves sport coat myself last year! Summer's nearly done here, in Vancouver, and I'm eyeing it's return. Also had to write about it: http://arlissrenwick.com/?p=1245