There's a lot of downright silly New England WASP sycophancy around men's clothing blogs, and I generally try to avoid it here. I've said so often that though many of the things I like may have been largely enjoyed by a certain narrow slice of East Coast society, I never found membership in any such group to be an exclusive requirement to anything. For one thing, as a good friend who is in fact from an old WASP family once said, more people had the values than had the money anyway. For another, we all dressed like this around Boston when I was a kid. Even immigrant Catholic mothers bought whale embroidered pants for their boys to wear on Easter Sunday, because, you know, that's what the stores were selling. However, 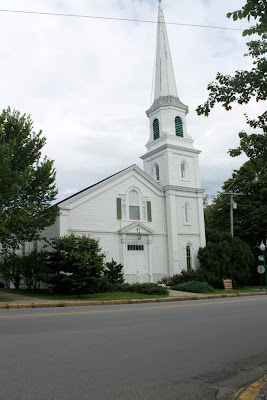 when you're on the coast of Maine, in a town full of old early Victorian houses with a small harbor full of sail boats, and the village church is an austere white clapboard building like this... 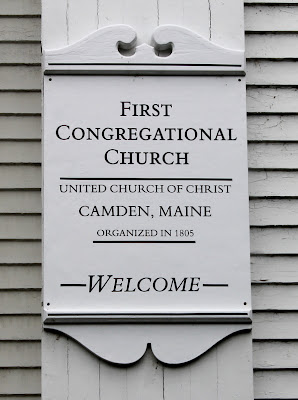 and that church is, of course, Protestant, and old, you know you're in good thrift shop territory, if you can find a thrift shop. 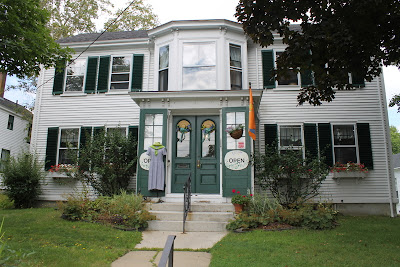 When that thrift shop is in fact run by the church and housed in the old colonial next door, you've hit what unwashed bottom feeders like me call The Jackpot. ﻿ A whiff, just a whiff, of that WASP sycophancy may be needed to make my point here.

Lots of people will offer the advice that when thrift shopping the best goods are to be found in affluent neighborhoods. While that's true, it only tells part of the tale. Besides finding an affluent neighborhood with a local charity, you need to find a neighborhood where the affluent people are buying the things that you want. For me, that means finding old Protestant neighborhoods like this one. I know that generations of men who have lived hear dressed in a typical East Coast way. I know that there will be lots of Brooks Brothers, J. Press, and things from small local shops in the same vein. Good old Yankee Thrift means not only that when the time comes to donate, it will go to the local Church, but also that the likely of finding rare older items will increase. I suppose the Rule Of Thrifting here is Always Shop at the old Church. Salvation Army, Goodwill, or Savers might have some good stuff the day you walk in...or not. The Church store run by kindly old ladies from the parish will have only good stuff. At least that's been my experience with these places.

This shop was bursting with it. After only half an hour, my arms were laden with more than I could carry to the counter. I say counter, but really it was an old desk set up in the foyer of this old house. One kindly old lady offered to let me look around the back room at the items not yet tagged for sale. Another half an hour, another weighty armload of stuff. As I dug deep into a plastic bin full of ties, another old lady offered me a brownie. Delicious.

As for the haul, I was giddy. Being as seasoned a thrift shopper as I am, I rarely get as big of a "thrill of the hunt" rush as this place gave me. I was giddy as I hauled an entire contractor bag of clothes over one shoulder to my car.  And that's just what I took in men's clothing. The books were great, because the same people that donate these good clothes also tend to read well. The housewares were terrific. And the fact that I was handing my money to a volunteer from a local church and that the whole thing was one giant act of recycling on everybody's part made the situation a win for everyone involved. That's something that no retail shop can give you.
﻿
﻿
﻿
﻿
Posted by Giuseppe at 8:38 PM

I can only imagine the "haul" you managed to find! I really need to take a road trip to the North East next summer to take in the sights of New England (and thrift, unbeknownst to the wife!).

There are some things that I really want but just can't get a hand on living down south because certain brands are regional (i.e., J. Press, Andover Shop, etc.) I have to rely on ebay for these brands (if I can get a good price!)

Please continue to enjoy your vacation! We all have to "get away" sometimes just to bring back balance to our lives!

Like you, I am blessed with Protestant church-run thrift stores in my area, though I also get plenty of good stuff at the St. Vincent de Paul stores. (We also have several animal welfare-run thrift shops—who'd a thunk it?)

As an aside, I found my early 30s tuxedo (in perfect condition) at a Protestant-run shop, but it's a Jewish lady at the St. Vincent de Paul who gives me cufflinks.

GOod for you! I hope some of your finds will end up in the shop for those of us who thrift vicariously. Living in Southern Cal makes for really challenging thrifting, so I guess I know where my next vacation will be!

Oh man, just reading this post gave me a vicarious thrill. My first really really exciting find was at a place like this. An Andover Shop suit that fit me as though it was made for me except that the trousers needed to be hemmed. Glad you're enjoying your vacation, and that you got some good thrifting in up there!

Sounds like you are having fun on your vaycay! (Can't wait to see the haul video, so to speak.)

And this is precisely the type of neighborhood those of us from the South really don't seem to have access to. It's definitely unique to New England coastal living. I wish I could say otherwise, but alas, I cannot.

If a fellow Southerner wishes to disabuse me of this notion, I require specifics.

Between this post and the previous, I feel I've had a nice little respite in Maine. Thanks for allowing us to enjoy vicariously.

Mmm...Church Thrift stores (Homer Simpson drool), and they are usually very cheap. I love a Jewish charity shop as well. Always got the good sh*t!

Nothing like a a good haul when you have to dump a load off at the register so you can carry on hunting. Bliss!

@Young Fogey
A Jewish lady giving you cufflinks at a Catholic-run shop?...who'd a thunk it?! Very cool, indeed!

Every guy needs a nice Jewish lady with good taste to give them cufflinks...at least I do. It would be another (great) excuse to buy more French-cuffed shirts!

@Kionon - In south Mississippi we have lots of church run thrift stores (and thrift stores in general). While some of my favorite items come from these places, they really are a mixed bag. Most of the clothes are from Wal-Mart or mall department stores. Occasionally, I run across something from Brooks Brothers or Lands end, and quite often Ralph Lauren (though not stuff I like usually). I got a couple of Vineyard Vines Polos at my favorite thrifting spot here in town once, which I found odd because there is nowhere around that sells that stuff.

Of course my most thrilling find around here was a pair of Allen Edmonds Park Avenue shoes in very good condition for $2.00. They weren't my size, but I sold them on ebay, then used the money to buy a shirt, tie and shoes.

Sorry, went off on a tangent.

I used to have access to such shops in the Midwest. I always looked for the Episcopal church shops. More than a decade later, I still have some of those beloved items thrifted with the help of old white-haired ladies running those shops. I also managed to score some very good furniture and home items from them. Want a good stuff for cheap, from couches to coats--Episcopalians; they don't buy cheap stuff.

Excellent article. I usually hit GW and SA (with Dillards/Jos. A Bank results at best), but will definitely be on the lookout for smaller religious thrift stores, esp. the waspy ones in classic waspy/established neighborhoods. They are harder to find on google maps, for sure.

Your assessment of the south (non-costal at least) is spot on. I live in central GA and the only things that hang on the racks at our local thrifts are worn out (not worn in mind you) old JC Penney, Sears, and Belk monikers...

Mr. G, I look with great anticipation for a great, heck I would settle for good, find.