I often like to indulge in bright colors and pattern matching that is likely excessive (though my preference for that does seem to be wearing off in my old age). Still, nothing puts it all in perspective like an assemblage of neutrals. 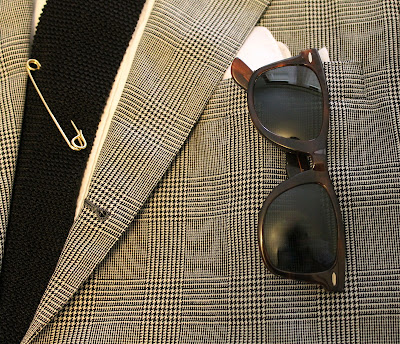 Still, an assemblage of neutrals doesn't need to be boring by any means. This is the time to play with texture and material. Remember too that black and white don't have to be kept separate from brown and tan. I think quite the opposite is true, that the four of them together, while perhaps more difficult to pull off at first, is far more interesting.

Here. a newly acquired jacket in black and white glen check, sans colored overcheck, gets its first outing ($7.49). The coat is unidentified, but carries all the right details: 3/2 roll, a high notch,  no darts, center vent, natural shoulders and half lining. The three button cuffs, as opposed to two button, lead me to believe that it might be from J. Press. ﻿ True, it might be half of a suit, but I don't think so. In this particular case, I hardly think it matters. The cloth is what I'd call 10 month weight, but two weeks ago on a day that hovered at 70, it was a nice break from my navy and white Summer uniform.

A white pinpoint Brooks Brothers shirt with button down collar ($5.49) is an obvious choice. A black silk knit tie (Lands' End, gratis) adds texture while keeping it simple. Brown Ray Bans, rather than black, with green lenses may be unexpected, but the country origins of a pattern like glen check take to brown accessories well, despite it being actually black and white. The pin on the tie is proof that I can't leave well enough alone, even when I'm supposedly "keeping it simple".

Below, tan trousers in silk/cotton blend with forward pleats by Ralph ($5.99), and old favorite brown tassel loafers, with off white dress socks in one of the few situations I can think of where they are actually the right choice.

Just because you're keeping it simple, doesn't mean you can't also keep it interesting.
Posted by Giuseppe at 8:16 PM

I won't argue with the look of the outfit, it looks dapper. But in what way are no darts and a centre vent etc the "right" details? Do you mean for your personal preferences?

I personally feel that an undarted coat looks, from the front, like a sack with sleeves.

Someone obviously hasn't been paying much attention...