Worth Every Penny : Lobster Roll

There are lots of good reasons to live on the Atlantic Coast in New England. Men get to wear silly pants and carry tote bags, and no one seems to care. Newness in anything is usually shunned, which is a boon to cheapskates like me who never really have anything new anyway. And then there's the seafood. I've spoken at length before of my love of the clam, be it raw, fried or in a thick chowder. But I have yet to expound on one of my our most famous and hardest to duplicate delicacies, the (high holy)  Lobster Roll. Given that I am in Maine, high holy mecca of the blessed crusatcean itself, I figured the time had come. 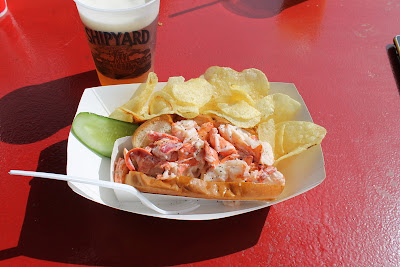 Friends from other places ask for advice on where to acquire a truly hedonistic Lobster Roll. Often, they tell tales of having had been disappointed by the offerings they've had in ﻿very fine dining establishments in other cities. Why, they wonder, is a Lobster Roll on the New England coast such an ethereal delight, while what by many measures may technically be considered "better" falls flat elsewhere?  True, our access to the finest and freshest lobsters on a near daily basis does of course contribute to this. But that's not the heart of the issue. The real key to a perfect Lobster Roll is simplicity. It's success lies in that particular combination of high decadence and cheapskate-to-the-bone Yankee thrift that make so much of New England culture captivating to those who weren't raised in it.

The meat should be fresh lobster claw and tail, cut up in big chunks. The dressing is a bit of mayonnaise, enough to hold it together, and nothing else. If you want to get fancy, a small amount of chopped celery is permissible, though by no means required. Anything else is not only unnecessary, but a minor sacrilege. The bread must be only a buttered and toasted cheap white hot dog bun. Anything else is not only unnecessary, but in fact a major sacrilege. No artisinal bread, no crusty rolls, no whole wheat anything, only a buttered toasted white hot dog bun. The combined facts of the mayo only dressing and the refusal of fancy bread are usually what make the non-New England overly gourmet version of this classic so lackluster. There is, after all, such a thing as trying too hard.

Accouterments include a pickle and potato chips, or sometimes French fries. Beer is the drink of choice, though ginger ale works well when alcohol is not allowed. China service should be only a cardboard tray and plastic fork, to pick up the precious bits that fall from the bun. The whole thing should be consumed under an umbrella at a picnic table in a place where the views looks thus: 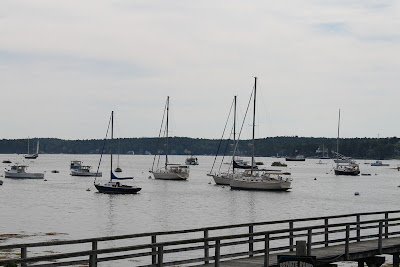 It won't be cheap, but it shouldn't be. The best part about all this homespun Yankee simplicity is that when you shell out the better part of a twenty dollar bill for a proper Lobster Roll, you can rest assured that it is the precious lobster meat, and its skilled preparation that you pay for, not the white table cloth and pretentious atmosphere. ﻿A properly prepared and properly served real New England Lobster Roll is worth every penny.

Special thanks to the Lobster Dock of Boothbay Harbor, Maine, for serving one of the best examples of this simple but perfect treat that I've had yet.﻿

Agree wholeheartedly. Down East Lobstah and Eastern NC Barbeque have that in common: the small, unpretentious, even rundown looking place holds treasure.

You forgot to specify that the roll MUST be a top-split roll...

Maybe a little of both.

Your post is a great reminder that you can have it good, fast and cheap but you can only pick two.

I would dispute a portion of this, as a lobster roll in one part of New England is not done as, in effect, a lobster salad sandwich: Connecticut does a hot buttered lobster roll, but still served on the split top bun (in most places), usually lightly cooked in butter on a flat top.

The Connecticut version of the lobster roll, served warm and drenched in melted butter, is the true Mack Daddy of the genre. For the quintessential example, try Abbots in Noank, CT. I believe it has the Muffy seal of approval.

I miss Maine and I miss lobster rolls....no such thing in California!

I was eating one on The Vineyard the same day you posted this...we like it with a dash of celery salt.
~M.