Today I heard of the death this past weekend of a man I knew in the old days. Torr Skoog was the vocalist, songwriter, and driving creative influence behind Boston band The Kings of Nuthin'. I wouldn't describe him as a close friend, but he was a guy I knew, who was friends with other guys I knew back when my life centered around the punk rock scene in Boston. His death, and the memories of my young life that it has brought to bear, has me feeling rattled enough the talk about it here. I'll try not to get too maudlin about it, because maudlin definitely ain't very punk. 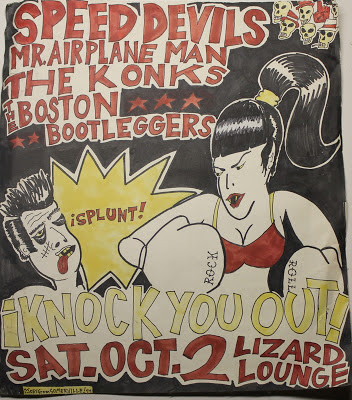 I drew this poster for a show we played back in 1999. I was the drummer in the Speed Devils, the rockabilly outfit you may remember me mentioning before. Mr. Airplane Man was a killing duo of girls, drums and guitar, playing blues the likes of which any band named after a Howlin' Wolf song should. The drummer went on to marry another good friend. The Konks were a favorite of mine, a band that was "garage" to the core yet somehow managed to maintain an originality that no one could touch. The Boston Bootleggers were the new guys at the time, and our man Torr was the frontman. They went on to become The Kings of Nuthin', local legends to those who cared, and in plenty far flung places too. This show was one of the best I ever attended. To have been a part of it was, in retrospect, a real honor. In true punk fashion, it resulted in all of us being banned from The Lizard Lounge forever. Someday I might get into the details, but I remember stepping across a bed of broken beer bottles to my seat behind the drum set when it was our turn to play. 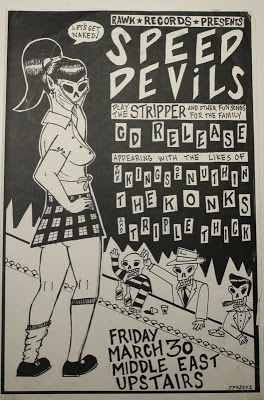 We went on to play with the Kings of Nuthin' quite a lot over the next few years. They always brought a level of fire and energy to the show that could only make you smile. To call them the living essence of punk rock would be a disservice to them. For one thing, they weren't really what I'd call a punk band. There were seven of them, or eight, and their music was based in the black rhythm and blues style rock 'n roll of the late fifties. A big band by the standards of any of the rest of us at the time, the line up included drums, piano (always a real acoustic upright, hopelessly out of tune, that they took to every show. Heroic), upright bass, guitar, horns, and this crazy dude called Necro running around playing a washboard. They dressed in matching black suits and ties, which were constantly filthy, but they were sharp by the general standards of the scene. None of this silly studded belt and funny haircut crap, leave that to me and my friends.What made them the darlings of the punk crowd was the sheer release of energy that came blasting out of these dudes, every f*cking time. It was thrilling to see, and it never, ever got boring. A lot of that had to do with Torr. He couldn't really sing, but he wasn't exactly screaming either. What he was doing was performing in a compelling way that held the attention of each and every soul in the room each and every second of each and every set they played. His lyrics had the anthemic quality of old hard core about them, which really got the kids riled, but he was much more of a writer than that, because his lyrics were actually good too.

That's the poster for our own CD release gig (damn, why didn't I say record release?). The Kings had set them up good, and everybody was in full swing by the time we took the stage. About halfway through the set, I see this giant flame come blasting out of an air conditioning vent. Startled, I looked up while playing to see it happen again. There in the vent was Torr, breathing fire. Seriously, I'm not making this up. When I confronted him about it after the show, he merely shrugged, smiled, and put a finger to his lips. What could I say? That was Torr for you.

I do remember him as being a somewhat enigmatic fellow. I know plenty of you think my tattoos and rock scene past are a little rough, but believe me I was nothing but a puppy in this crowd. These dudes were for real, and Torr was the realest. Sometimes homeless, sometimes living on a garage or some such crazy place, always working on some 1940s hot rod or other that was never really done, and covered in real, homemade crazy tattoos. Trust me, my shtick was downright pedestrian next to him. But for all that, you really couldn't find a nicer, more polite guy. He was disarming in his politeness in fact. It always caught me off guard a little. Once, I ran into him in The Model Cafe, then the high holy watering hole for real degenerates and wanna-be degenerates like myself, and he proceeded get us both drunk on beer and shots of Galliano, of all things. Weird.

I had just run into him, randomly, on the sidewalk in front of my job, only a few weeks ago. It was the first time I'd seen him in years, but he was just as friendly as ever. When I heard about his death this morning, it shook me up a little. He was a young man, probably not yet forty. I spent the whole day remembering those times, the people I knew and the person I was. It's funny, I often talk about all that stuff I was into, all those punk bands and silly shows, as a learning experience best outgrown when adulthood kicks in. But many of the friendships remain strong and the memories fond, and I don't regret a minute of it. It's a big part of the man I am today, even if most people might never guess it at first. Torr Skoog was one of the more dynamic personalities I encountered then, a truly memorable person. He may not have been a close friend personally, but he stands in my memory as a representative of a formative part of my life, my own version of the "good old days".

-Joey from Somerville
The Speed Devils

A heartfelt post, Guiseppe/Joe. (It is hard for me to imagine you with tats.)

By the time I was 36, I had already lost 5-6 friends, coworkers or former classmates. Then there came a gap of many years, and suddenly a grade-school classmate, who seemed to lead a charmed life, died. That death touched me deeply. I, too, felt the need to write about it.

You have done a fine job. It helps make sense of it when you chose memories and words to share. And it mitigates the grief somehow, too.

Thanks for the story Joey/Guiseppe. Was a great read and fascinating to think on. Funny how all of us have our own biography that put down in text is as interesting as the general pulp released by 'celebrities' every week.

really sad news about Torr... thanks for writing this. I don't know you personally but I know of a few mutual friends and it has been great reading everyone's reflection on him and the Kings


Loved this writeup. Many thanks for putting my brother's legend to 'paper.'

No need to thank me. He deserves the posterity.