What's on the Inside

Now, now, settle down. I'm not about to proclaim that clothing is but a skin we invent for ourselves, and therefore ultimately meaningless,  but rather it is one's character and thoughts that count the most. You should know by now that I am far more shallow than that, at least so far as "blogging" is concerned. No, instead I intend to discuss how the inner construction of a shoe determines its suitability for wear without socks. Relax. 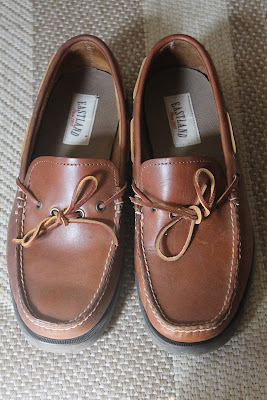 As soon as we have the first day warm enough to go sockless, around mid-May or so, I generally do, until the Fall. I know that socklessness has become something of  a de riguer look among the fashion-for-fashions-sake crowd, but simply put, it doesn't work with all shoes, and certainly not all of the time. Softly constructed moccasins or canvas sneakers are the only acceptable choice, with penny loafers (a kind of moccasin) the only hard shoe allowed. Double monk straps, tassel loafers, oxfords of any kind, even white bucks, worn without socks are the mark of the fashion slave, not the well appointed adult. Wearing those ding dang "pedi socks" with such shoes in order to ape socklesness while actually wearing socks is akin to non-alcoholic beer, de-caf coffee, or diet soda...pointless.

Pictured above is a pair of Eastland camp mocs I recently purchased new online for $79. Camp mocs, along with boat shoes and blucher mocs, are the quintessential no-sock shoes. Softly constructed and painfully New England, one might venture to sat that wearing them with socks is simply wrong. This pair is constructed of reasonably good leather in the traditional style.The toe is a but boxy, but it wears down quickly as it softens. 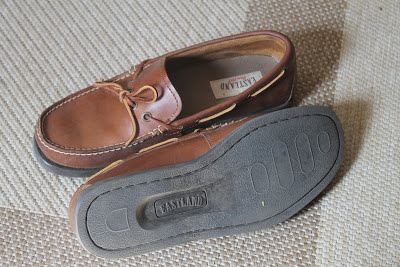 They have a proper camp sole, and sturdy raw hide laces. So far so good. 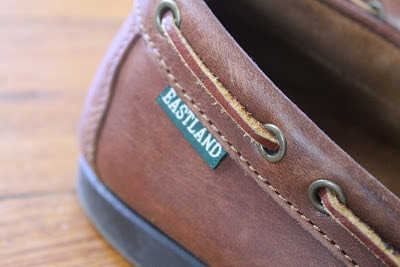 The tag on the outside is not ideal, but I can live with it. Hell. even my Quoddy's have a tag like that. But...

They're lined in some kind of gross synthetic. After only one wear, they stink. Using a synthetic liner is really bad design, as this shoe is practically meant to be worn without socks. So I ripped the lining out. 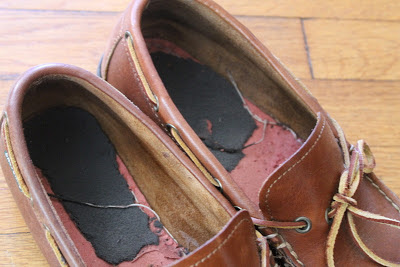 This is what we have inside, and I am left with a fully unwearable shoe. Anyone know where I can get a pair of leather linings? You see, leather is natural. and as such, shoes lined in leather don't stink, regardless of how the feet that wore them may have sweat in them. 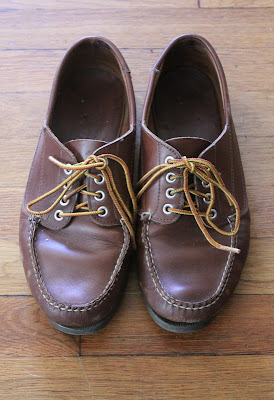 Later, I found a pair of L.L.Bean blucher mocassins in nearly unworn condition at a thrift shop. Classic though they may be, I am leary of these shoes, as the last pair I bought wore out really quickly. The leather is not as good as the Eastlands, for one thing. 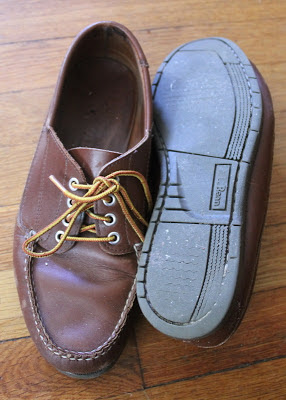 And the soles are awful, all wrong. But they are lined in leather, and they don't get all gross after one wear. Plus, the shoe laces wear out really fast.

So, which is better? The shoe well made of good leather with the crappy, stinky liner, or the crappy plasticy knock-off from the company that invented the style, lined in leather. Both are,in my opinion, a terrible compromise, especially given the provenance of hard wearing old yankee thrift atached to both brands.  But I digress.

If you're going to wear shoes without socks, be sure the liners are natural. If not, the ensuing stink will not be worth any idea of suffering for fashion you ever had. It will just be gross. And don't ever wear hard dress shoes without socks with a suit. That's just bad.

See, told ya' it would be shallow.

Shoe's lined in leather don't stink? I have a pair of boat shoes that beg to differ.....

Thanks Joey. Have always wanted the skinny on this. We rarely get the days to do it in England (been winter weather for 11 months here so far) but when do would like to shop at local thrift shops and know what to look for so your post has been invaluable as always and interesting to boot.

The cobbler in Waban has leather lines they'll glue in for a nominal fee, I had them do it with my Oak Street Bootmakers penny loafers and they've worked perfectly.

Maybe a little, but there are ways of handling it. With synthetic liners, once the stink sets in, that's the end.

Curious as to why wearing Bucks (both white and dirty bucks?) without socks makes one a fashion victim/child?

Regarding the label on the side. Just slice that off with sharp knife. I did so on my Irish Setters. Unless you're the kind of guy who like to show off labels.

Interesting post. Just bought some Eastland loafers, which I have not worn yet. Thanks for warning me.

Maybe you can use some removeable/washable liners to wear without socks. I've never used any, but these get good reviews: http://www.amazon.com/dp/B001G0NSU2

Best solution might be to go with the Eastlands, then rip out the synthetic liner and replace it with something like this: http://www.amazon.com/Pedag-172-Mens-10-11/dp/B001E6TXS4/ref=pd_sim_sbs_hpc_1

I've had liners go bad on several pairs of shoes (before the outer leather did) and these work great. I always size up by at least half a size, then trim them down a bit if need be in order to get a snug fit.

Bucks are heavy shoes, which look silly without socks. It's really "trendy" to wear big heavy shoes without socks, but to my mind it just defies logic. It's not even comfortable, unless you where those pedi things, which means you're only pretending not to wear socks anyway. It will look as dated a silly in time as ruffled tux shirts look now, right along with super tight, super short jackets and that damn shaved sides/side part hair cut that's so "in" now.

Remember , in men's style , words like "in" and "trendy" are best avoided.

^ Dunno, I think that's a bit reactionary, like just because pocket squares get featured in some spread in GQ or Esquire or something does that mean I should stop wearing them? I don't think so.

Also, I would not really describe my bucks as 'heavy' shoes. I very much see your argument in regards to something like longwings, but the bucks I have don't weigh significantly more than canvas sneakers.

I have to respectfully disagree with your thoughts on pedi-socks (man-peds, as I like to call them). I own numerous pairs and love them because while I like the look and feel of socklessness around my ankles, my feet get very uncomfortable going "naked" inside a shoe, even when lined in leather. Rather than being "pointless," I feel like they offer the best of both worlds.

Still, yours is the best menswear blog in existence. Bravo.

The Eastlands ARE leather lined, I can see it. Lining is the inner body of the shoe. Only the insoles are synthetic and that's an easy fix. At the least it's a doddle to pick up leather insoles for a few units of the local currency.

The matter of whether one's shoes will go pongy is not just a bit of sweat from a man-made insole, but the general sweatiness of one's feet. I'm lucky, my shoes never stink (and I don't loaf about all summer in the same 1 or 2 pairs of shoes).

Those 'pedi' socks (and who's looking that close anyway?)are good for people who sweat badly. It's not pointless, and neither is alcohol-free beer; I like the taste of beer, but don't always want to be drunk.

I don't care for the sockless look, but if I were to do it, I would definitely wear no-show socks. My feet sweat enough that I don't even like to wear something like Tevas anymore (because Tevas, like all sandals, must be worn sockless) (and I only wear them for outdoor activities like hiking on easy trails, especially ones that are next to streams).

Having said that, the "no socks with hard sole shoes" look is for fashion victims. Suits require socks. Period, the end. No discussion.

It must be an east coast thing, but I think it is never appropriate for men to wear shoes without socks. One of the last things a man wants to see is another man's ankles sticking out from a pair of trousers.

You've lit a bit of a fire with this post G.

I too scorn those jackets but I must confess, I do have a classic short back and sides.

My 2p - the only things I go sockless in are espadrilles when I go somewhere hot for a week in the summer. Such is life in the UK.

What about driving shoes / moccasins?

Driving mocs are a soft shoe lined in leather, so a-ok.

I wear my hair neat at the side and longer on top, too.I was referring to the shaved sides/severe side part thing.

Drinking real beer need not always be a means to drunkenness.

I think you have backed yourself into an indefensible position on bucks; at least, the weight of opinion would appear to be against you. Indeed, I consider that bucks worn with socks look slightly ridiculous. I read somewhere that the French Foreign Legion do not issue uniform socks (perhaps Cod can confirm or refute this), so harden up you fellows.

If it makes you feel better G,I agree with the whole post.Here in Texas we do not wear socks with boat shoes or any moc style shoe.As most of those shoe styles are made for wear around water or on boats,it would be pointless to wear socks.
When it comes to the Eastland's,you could have spent ten more dollars and purchased the L.L. Bean Handsewn Mocs. The leather appears to be better than the Eastlands and the insole is also made of leather.As far as you're shoes stinking inside,I use cedar shoe trees and put them in my shoes as soon as I take them off.They do a great job of preventing any accumulation of foot odor.
Just my two cents,
Jerry

Went to the pub this afternoon (The Seven Stars in Bottlesford)for a Fathers' Day pint with number three son. Dirty bucks with no socks; so there!

Bucks with no socks is fine. Imagine this outfit on a Jazz LP cover, white dude in dashiki with cut off denim shorts and dirty white bucks with no socks holding an instrument case outside a club. That is killer style, probably had the Andover Shop tighten up that dashiki.

And pedi-socks are ingenious. Why be against a technology that makes something that was uncomfortable comfortable, does your bike have a 48" front wheel and a steel saddle?

Pedi socks are half steppin', P. And I never half step, 'cuase I ain't a half stepper.

I don't like the idea of pedi, very much, but if one sweats so badly (I hope i don't) and wants the look of no socks I don't see problem, no need to be uptight on this, besides I'm ideally on the school "either wear no socks or wear ankle socks with style (when in shorts)" but don't be ashamed of having socks on.
I never had a premonitory dream of me eventually giving in to pedi socks, lol, but if nothing will work this summer, it's not excluded I will :).