Worth Every Penny: Quoddy Refurbishment Service 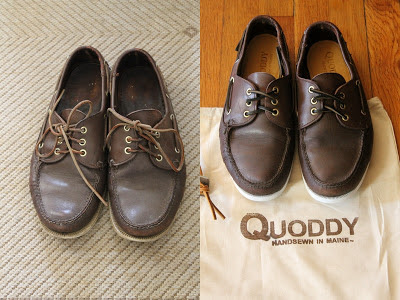 I'd be at a loss for footwear in Summer were it not for a good pair of boat shoes.In the past I've had many, mostly Sperry Topsiders. They were a favorite for my mother to buy for both me and my brother as children, I think because the store in Charlestown where we got our kid shoes always had them and for cheap. Just dressy enough to pass muster under the uniform guidelines at Catholic school, but soft enough so that we weren't constantly bemoaning the fact that we were required to wear shoes.

A few Summers back, I got a pair by the fabled Quoddy of Maine, much revered among the artisinal Americana set. They are clearly better made than Sperry Topsiders of better leather, and cut higher, more like a real shoe. I don't know how happy I'd be actually paying $225 for them, but they last well. To be fair, I should tell you that my pair was bought in a thrift store for less than $10, and I wear them pretty much constantly from May until September. The battered pair on the left arrived home today after trip to Maine, and came back as the much refreshed pair on the right, complete with canvas shoe bag. 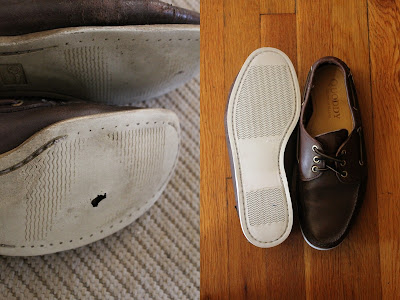 The white boat soles had worn down to nothing, and even much of the stitching was gone, leaving the soles flopping off the shoes. 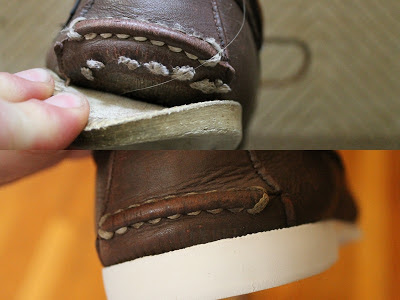 Literally peeling away. But the shoes were worth saving, so off to Maine they went. A day later, I was contacted by a friendly lady from customer service inquiring as to exactly what repairs I wanted done. I only wanted them resoled, I told her, with the same white soles they had originally. "I think we can do better then that" she replied. What I got back, a scant two weeks later, were shoes with new soles, new cushioned leather lining, reconditioned leather, and new rawhide laces. Total charge was $34.95, $25 plus shipping. In keeping with my previously stated belief that sometimes the best new things are old things that you already own, I now have an excellent new pair of boat shoes ready to go another three Summers at least, 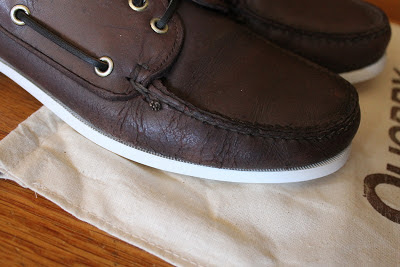 with just enough cozy wear and tear on them that I don't feel as though I need to knock the "new" off them. Admittedly, I may have gotten these shoes very cheaply, but even if I'd bought them new my opinion of the service wouldn't change.

The shoes themselves may be a bit dear, but Quoddy refurbishment service is worth every penny.
Posted by Joe at 8:13 PM

"I think we can do better than that" What a refreshing wonderful attitude!

Good for you for repairing them rather than tossing them out and good for Quoddy going the extra mile for excellent customer service.

I want to echo Northmoon in applauding the attitude of the Quoddy customer service. Sometimes you get the feeling this attitude is entirely moribund.

I don't wear boat shoes (I probably should if they look like these), but I'd shell out $35 or equivalent for that kind or restoration. Very pleasing result.

I got my first pair of Quoddys a while back and agree, the customer service is 'old fashioned amazing'...

That's some world class patina right there mate!! Keep eating those sprouts and put some more miles on them shoos ;)