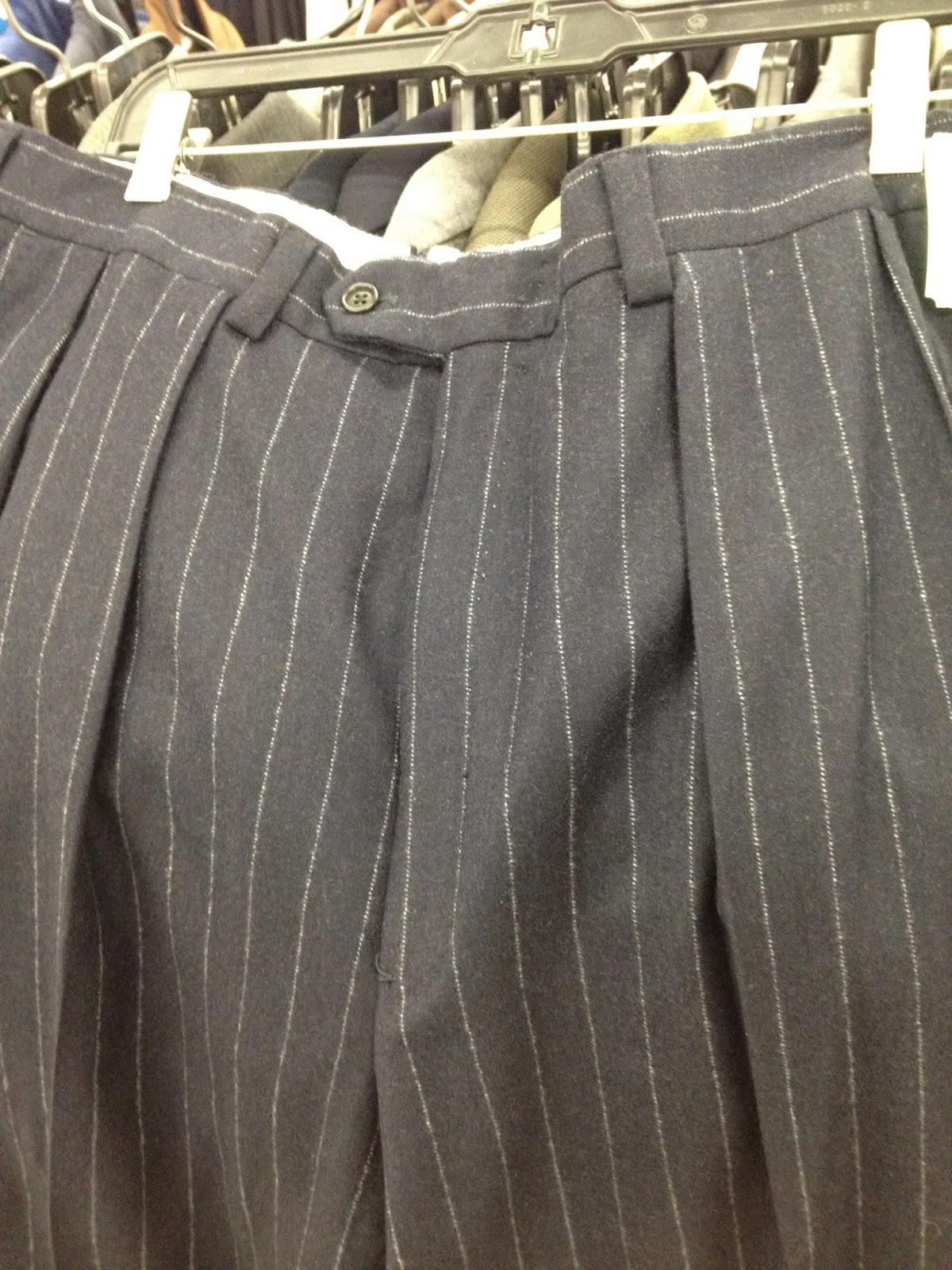 Yesterday I found this pair of pants, 90% wool/10% cashmere, navy blue chalk stripe, with forward pleats, a high waist, and brace buttons. Made in Italy for Paul Stuart, the tag showed that they were the bottom half of a suit (obviously) in my size. It's no rare occurrence for a suit to become separated in a thrift shop, so I searched for the jacket in the sports coats with no luck. Determined, I hunted through the outerwear, still no luck. Undaunted, I rifled through both the ladies jackets and outerwear. I even put Mrs. G on the task. Still, nothing.

Once, I managed to reunite a suit from two different Salvation Army stores. I considered taking a gamble and buying the trousers in the hopes that the coat might turn up elsewhere. Silly I know, but I've been wanting a navy chalk striped suit ever since I was a kid. Amazingly, common sense prevailed and I left the trousers behind.

I awoke today with a nagging feeling that I was going to bring this garment back together, so first thing I traveled to the other store in search of the orphaned coat. No dice, but I did pick up a crazy red tweed jacket with bellows pockets and a half belted back (coming soon to the AAW Shop).  Like a man possessed, I again visited the first store in the hopes that the coat may have been put out later in the day after I left. On the drive over, I saw myself wearing the suit, with a collar pin, wool challis tie, and black lace ups. The trousers were still there, but not the coat. Reluctantly, I gave up.

This story serves to illustrate not one but three of the basic tenets of thrift shopping:

1) Persistence is the one thing that separates the men form the boys
2) In order to do this successfully, you have to be willing to accept an occasional heartbreak
3) Only a crazy person would do this

p.s. You know I'll probably make another pass at this in both stores next week. Commit me.

I admit to being a thrift novice, and can understand the desire to unite pants with coat - but is there any harm in buying the pants and wearing them separately, with a nice sport coat? I recently purchased a jacket and only after getting home did I realize it was part of a suit - alas, the pants were not in the store. I only set me back $8, and I've worn it a few times. Perhaps I'm the only one who knows, or do the real thrifters look at me and say, "Look - there goes a guy wearing half a suit of clothes."

Might if be possible to pair these pants with a blue blazer or some other solid color odd jacket?

To my eye, chalk striped flannel is fabric for suits only. Half a suit is worse than no suit at all.

Just think, someone could have bought the jacket without the pants because they thought it looked nice.

I feel your pain!

John G., a suit is one article of clothing that just happens to come in two (or sometimes three) pieces. One of the biggest mistakes that men who want to dress nicely can make is to split up the parts of a suit. Pinstripes and chalk stripes say "suit" and so can't be separated. Only rarely, and only with casual materials, such as tweed or seersucker, can a part of a suit look good without the rest of itself.

I once saw a guy at a thrift store purposely separating suits and buying only the pants that had patterns - checks, pinstripes, everything. He made a lot of orphans that day.