Warning: This post may contain a fair amount of unrelated content, but since this is supposed to be some kind of clothing blog, here are the customary vanity shots for the day: 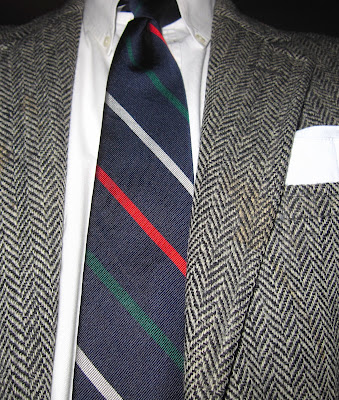 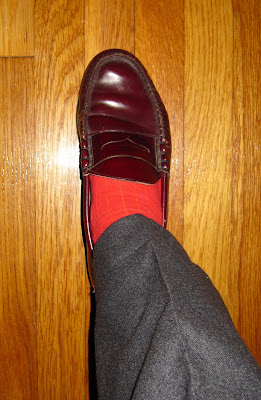 Punched up a bit with penny loafers and bright red socks.

Now for the unrelated bit: I think this is the first outfit that I wore to work in architecture. As of tomorrow, I am part of a four person team of students who will be proposing a few new designs for the expansion and renovation of the school library. It's a federally funded work study job, part time and tax exempt, running for the next ten weeks. Our supervisor is an award winning architect who cut his teeth in I.M. Pei's office working on the Mt. Sinai Medical Center in New York. This was also when they were designing the pyramid addition to the Louvre in Paris and the famous China Bank Tower. You may or may not now about architecture, but believe me that's pretty damn prestigiuos.

We'll be helping the library staff to reach a decision about how best to incorporate most of the floor below the existing library into their program. The final design will then be sent off to an actual firm to be tweaked and eventually built. Not bad for my "get your feet wet" position. Beats hell out of starting in the mail room, anyway.

The whole thing sort of dropped out of the sky at me. Thursday, I chanced upon a meeting with the man in charge of federal work study positions. We talked, he found out that I have a love of hand drafting over computers, and said I'd be perfect for this job, since the architect loves to work in the old fashioned way. Monday, I emailed him my resume. Tuesday night I got an email asking me to come to a meeting today, and tomorrow I'll be crawling around the fifth floor with a tape measure so we can get started on the "as built"drawings. So just like that, after two years of searching and only having one interview, I find myself working on a real project to be constructed within a few years. Best of all, the duration of the job coincides with Mrs. G's maternity leave.

So from now until the end of May, I'll be taking two classes, one of which is a studio, and living with a 2 1/2 year old, a newborn, and my recuperating wife. I saw a cute thing today that said "stress is when you're gut says 'no way' and your mouth says 'sure, no problem'". I think I get that now. Our supervisor laughed when I told him what was on my plate, and said something about how so many good architects have a habit of handling what ought to be too much all at once, so I must be on the right track.

Don't be surprised if the posting here grinds to a crawl in the near future. I'm sure you understand, dear readers.

(p.s. Before I get a ton of comments asking if that's a stain on my lapel, it's not. Just a bad photo.)

Congratulations! and "in bocca al lupo!"

Congratulations on the library and family expansions. I'm sure you will do a great job on both.

Congrats on your new gig! It sounds like a really good resume enhancing experience.

Congratulations on your big break! That's you on yer way.
Well done, I'm made up for ye.

from one architect to another, congratulations!

What a GREAT story. Planning and focus and hard work are important. Serendipity and luck are also vital ingredients for a blessed journey. Amazing that you landed this opportunity and indeed, you deserve it.

Life is robust and I'm confident that you realize how blessed you are with wife, boy , work-school projects and ....you just wait....till that little girl arrives. Sublime my friend. Sublime.

Is that a stain on your lapel? HA! Sorry, I couldn't resist, and I'll probably be one of many.

Cogratulations on the position. Hopefully, it leads to bigger and better things. In the accounting world at college, receiving that type of opportunity nearly always led to gainful employment.

Congrats! Its great to hear the good news. May I ask what school you are studying at right now?

Glad to hear that you've had a stroke of good fortune.

we'll forgive you as long as your post some newborn pictures...congrats on the job! you'll also have so share some of your drawings. i know nothing about architecture, but they are very cool!

Congratulations! Your cup runneth over....with blessings! (and I roll my eyes when my overly religious relatives say things like that, but in your case, it's true).

Congrats Giuseppe. I hope it works out well for you. Let us know how it's going.

Congratulations!!! I am so pleased for you on all counts.

Congratulations! I've been following the saga for a while and was really happy to read this. Good luck juggling the schedule.

Thankls for the kind words, everyone. You humble me.

What wonderful invisible friends I have!

Congratulations on the new project. I hope all goes as you want it too.

Giuseppe, Heartfelt congratulations and warmest wishes on your new endeavor! What a wonderful sounding opportunity to learn. All the best, HTJ.

My mama always told me that each new baby brings in new luck... looks like it's true for you. Congrats!!!

Good luck with everything, my friend. What blessings! It'll be interesting to see how this project turns out.

Congratulations. Speaking of cutesy quotes suggestive of your life situation, someone quipped to me the other day: "if you want to get something done, give it to a busy person." Happy fathering and drawing.

You're on your way to a trifecta. Congratulations! On everything including today's announcement.

I think I held the door open for Mr Pei a couple weeks ago at the Food Emporium under the Queensboro Bridge.

Glad you're not going with the Rem Koolhaas look.

Congratulations! This gig will be the first in a series, I'm sure. Make sure to use this opportunity to make contacts, because networking really is how things work.

Good luck on juggling it all--and have fun with your kids! You are blessed.