Young Men in the Old Days

Today the Affordable Wardrobe was joined by this sporty little number: 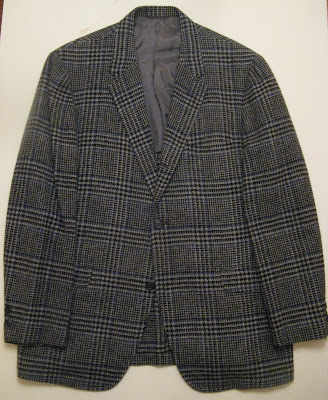 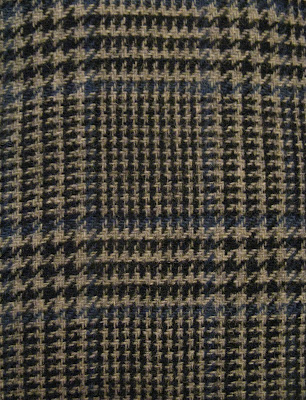 Made of this gorgeous and unbelievably soft piece of fabric. Too soft to be just wool, maybe part Alpaca? Who knows? Who cares? 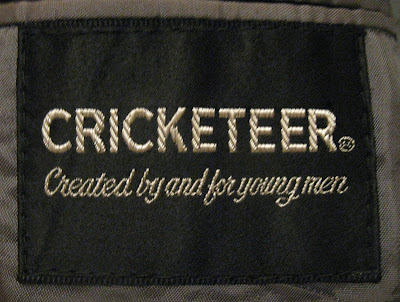 This label is priceless. I guess I'll have to pass this one on when I get too old for it. Can you even imagine a time when this would be considered clothes for a young man? Seems like it was a million years ago.

I sort of remember Cricketeer being something you could get at Filene's men's department. Apparently it's a brand that was produced by Joseph & Feiss, who now manufactures things for Hugo Boss. Sometimes at Simon's we would get a chance to buy some stuff from them and have our labels put in. That was always a big deal, a special occasion.

Picture this one with dark grey flannels, a blue button down shirt and a navy wool knit tie...or better still a black merino wool turtle-neck...gotta get me a turtle-neck.

In other news, I've got an interview tomorrow at Jos. A. Bank on State Street for a part time job selling menswear. Do you think I can sell menswear? Looks like the navy suit and white shirt will be going out for another spin this week. Just for luck, I bought this tie: 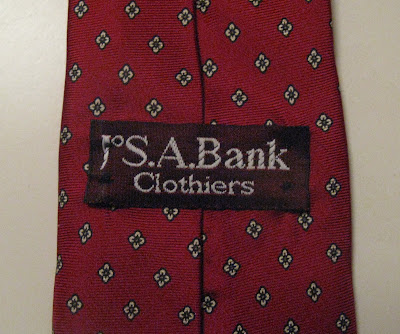 I used to be sent out to spy on these guys back in the days at Simon's. The funny thing is, the State Street location actually occupies the very space that was once Simon's State Street.
Not exactly the kind of work I was looking for, but anything beats being on the dole. Maybe I could even get some clothes out of it, but my thrifting gene will probably never let me pay the exorbitant sum of $249 for a suit. At the very least, it's good interview practice, and of all the innumerable resumes I've sent out, these guys were the only people to even call me back. Wish me luck.

good luck at your interview. they would be fools not to hire you. i did decide to tune in to the superbowl for the halftime show once i found out it was springsteen. i love the boss. as soon as he was finished, off went the tube!

The breast pocket on the jacket seems to be sagging, which isn't surprising for a jacket from the '60s. I'd suggest you stitch it up in order to maintain the regularity of the parallel lines.

Best of luck with your Jos. A. Bank application.

Ironically, you have the wardrobe for the Jos. A. Bank gig. Good luck on your interview.

Excellent jacket--I love the subtle blue running through it. I so wish I could find good stuff like that for DOTR but he is FAT and in the olden days, people were not so large. Even in the 70's we were much smaller--my size 7 cheerleading skirt would not fit my size 0 daughter when she was in high school.

Oh, and I can't forget...good luck with the interview!

I have to warn you, Jos. A. Bank is one of the worst employers on earth. The base pay is dismal, there is virtually no chance of "making commission," keeping up with the permanent overlapping "sales" hurts your head, and the employee discount isn't even anything to write home about. Believe me, I speak from experience; I was an assistant manager at a JAB for five months in 2007, filling in between other jobs. The assistant manager pay, considerably better than the associate pay, is still well below your average unemployment benefit. It was a very depressing experience overall.

Men's Wearhouse, although its clothing is somewhat lower quality, has a reputation as a much better place to work, confirmed to me by many current and former employees. People do make commissions there, and are treated better. JAB employees are treated terribly.

I'm not to worried about the breast pocket since I'll likely always wear a white pocket square in it anyway, hence compensating for the slight sag.

Women's sizes are nonsense, anyway. How does the number 7 magically become the number 0? How can a persons size be 0, or "nothing". One thing about mens clothes, at least most of it is sized in actual inches.

Thanks for the warning. The interview has been moved to tomorrow. I'll take it under advisement. This would be an in between job for me too, so I'm not going to sweat over it too much.

Funny, when I called 2 days after applying on line to follow up, the guy I spoke to said somewthing like "they're always looking for assistant managers." Maybe that should hve been a red flag, code for "people always quit this job.

Thanks everybody for the wishes of good luck.

Good luck. I am of the opinion that anything's better than nothing. You're the man for the job - clothes-wise. A friend of mine is a window dresser for JAB and she's been there for about 15 years.

Deftly applied high-pressure steam ironing in an upward direction should remedy the sag.

It's late in the day. I hope the JAB interview went well.

They'd be mugs not to hire you fella. Be yourself and the job's yours.