Just this morning, I lamented the loss of an old reversible riding vest with brass buttons. Incredibly, mere hours later, these two lovely items found me at the thrift: 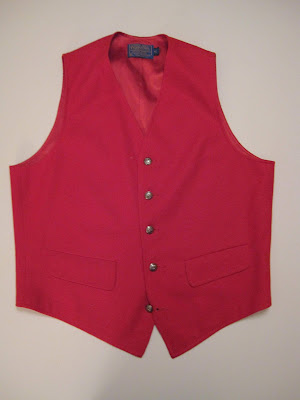 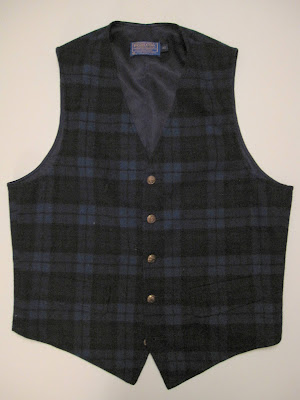 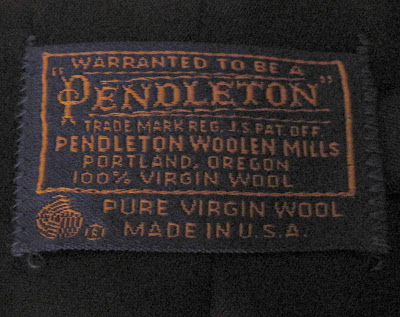 Both from Pendleton, both made in U.S.A.

Incredible good luck, that. Maybe I should just write a bout more stuff that I lost, or want. Maybe it's magic. Did I ever tell you about the Mercedes diesel station wagon that I lost(just kidding).

I also managed to pick up a few interesting neck ties: 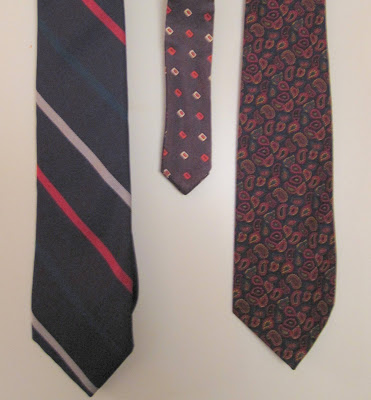 The striped one is from " Reis of New Haven". I failed to find anything about this store on the internet. Any of you Yale boys remember this place? I suspect they were murdered quietly by J.Press.

The madder silk paisley is from "Beau-Ties" of Amherst, New Hampshire. No website to be found, but apparently Beau-Ties is one woman in New Hampshire who makes men's and boy's neckties by hand for mail order. Fantastic! I must contact this woman for a catalogue. 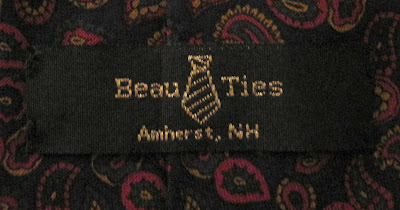 But clothes aren't the only things to be found at the thrift. I also got this terrific book: 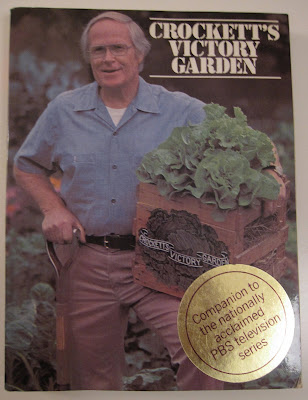 I remember watching "The Victory Garden" on PBS as a small kid. I think I liked it so much because my grandfather took such pride in his fabulous vegetable garden. What's great about this book is that it goes month by month, beginning in March, listing what to plant, what seedlings to grow in the house, when to prune, everything. And it was written around Boston, so it's geared toward what thrives here, where I live. I had a pretty modest garden for the first time last year. I grew some flavorful, juicy tomatoes and some Italian green beans but little else. Hopefully, this book will help me be more ambitious in the coming season. The forecast doesn't seem to have a job in it for me any time soon, so I should have plenty of time to putter around the backyard this Spring.

I have one or two of their bowties, not bad quality.

A blog friend has a theory on finding things at thrift stores. Click here to read his hilarious story.

Same name, different company. This one is in New Hampshire. The one you guys are talking about is in Vermont.

Your friend seems to have my kind of luck, but with furniture. Thanks for the link to another fun blog.

Had a good run at the Goodwill yesterday, too. It was one of those days when you find a dozen shirts that are the same size (same guy, of course). These were 16.5 necks where I'm more comfortable in a 17. I went for it, and also went to the YMCA first thing this morning to reduce tubbiness!

8 Brooks Bros shirts in all sorts of staple colors and patterns, 4 ties, $39.

Enjoying catching up on your fall posts.

All the best,
Andy
(the commenter formerly identified as Ellie, who promised fidelity, etc., who is now no longer signed on to his wife's blogger account)

Victory Garden is still on PBS. I love their theme song.

We had tomatoes last summer--though our never ending drought conditions have killed the joy of gardening for me. Maybe this year will be better.

Reis I believe was on Chapel Street in New Haven. Had some of their shirts and ties in the 60's. Competitors were of course J. Press and the Yale Co-op - also Ensons and Whites. Whites was fantastic - famous for Shetland sweaters.

Reiss of New Haven was a manufacturer of fine neck ties. they never had a retail outlet of their own. They had a big sign in J. Press that they sold the tied but that was it. I worked there in 71 and 72 as a high school kid. Great people.. it closed in the late 70's.