As much as I love good old Brooks Brothers, at heart I'm more of a J.Press man. If I had money and actually bought clothes new, I'd likely shop there. For one thing, they still look like what they are and always have been, a standard bearer of American menswear, unlike Brooks Brothers, who now seem to be merely a label with little connection to its history, other than from a marketing point of view. Or maybe it's because Press is a New England thing and Brooks is a New York thing, so it's a bit like the difference between the Red Sox and the Yankees...who knows?
I'm thinking of this because two real scores, J.Press by way of the thrift, joined the Affordable Wardrobe today: 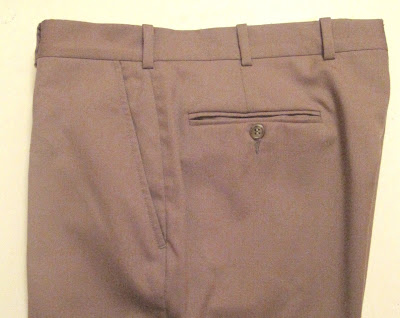 First, this pair of khaki wool pants, sturdy but soft to the touch, with just the slightest red undertone in the fabric, $4.99 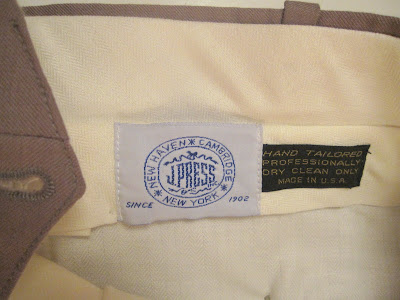 My educated guess says 1970's vintage, judging by the fact that the label lists only New York, Cambridge and New Haven, not San Francisco. But what does it matter? They could be brand new or 50 years old. With J. Press, consistency is the name of the game.

As evidenced also in this lovely necktie: 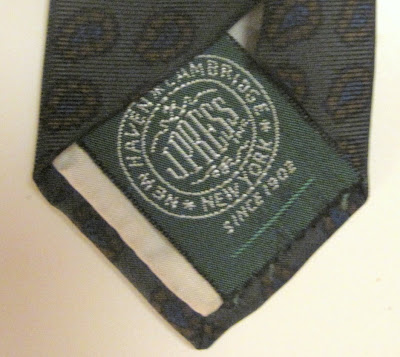 I'm guessing this is even older, possibly 1960's. It's cut rather narrow, and note again the three city label.

I find a real satisfaction in acquiring clothes that are older than I am and owning them for many years...especially at a savings of 99.6% (that's right, do the math, $7.98 vs. 187.50). Builds character, or something. Plus, every time those hippie college kids on the sidewalk with the clipboards campaigning for the environment look me over as a stuffed shirt, I get to be all smug to myself and think "Green? Recycling? You think you invented it?"

It is however, a little weird to occupy a social position smack between those kids and the old money who discarded this stuff in the first place.

Unable to afford them myself, I was fortunate enough to receive som J. Press ties last Christmas. I found them to be extremely flimsy compared to their Brooks Bros counterparts. Can't get them to knot well--no body. They just hang there lifelessly when I wear them. Too bad, because the Press selection of ties is far more classic and far more attractive than the range offered by Brooks.

need some 'action shots' of the trousers! they look very nice. Fred

G. It's not weird to occupy that "social position" ...it's cool. I've always been there, by choice, even after I had the resources to climb.

what is the location of your thrift store...or could you give the general geographic location...around here I don't see myself ever finding anything by J Press in a thrift...if I took a guess I would think you were outside of a major city where there is a J Press store

sorry I just read that you are from around Boston...and I have been to the J Press store...we don't have one where I am from in Central NY state