For ages I wanted a hunter green blazer, as an alternative to the standard navy blue. After finally finding one, I'm glad to say that I love it as much as I hoped I would. Sure, it gets the occasional "Masters Tournament" crack, but I'm used to jokers by now. The trick, I find, is to pair with the same things you might pair with a standard navy.﻿ 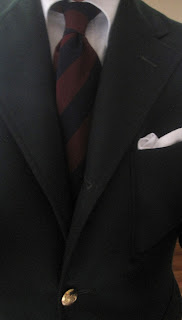 Can't go far wrong with a white button down oxford (Brooks Brothers, made in U.S.A., $4.99) and a repp tie in burgundy and navy (Andover Shop, made in England, $1.00). A simple white square drives the final nail. 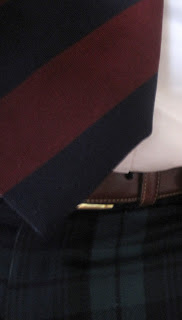 That classic shirt and tie combo turns out to be a pretty good foil for some Black Watch tartan pants. If you're gonna wear a green jacket, may as well take it to the wall with some plaid pants, right? Given that this outfit may have been considered casual a million years ago, I find it's best to stick with leather goods in brown (Coach belt, made in U.S.A., $1.00)﻿ 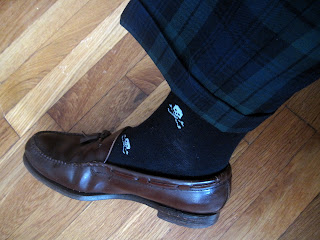 I know the old skull and bones is just about the very definition of "played out" by now, but who cares? I read a lot of guys in the blogs who like to claim that only certain dusty Yale guys have earned the right to sport the motif, but those guys only stole it from pirates in the first place (aargh!, not the baseball team). ﻿
A green blazer makes for a fun outfit.
Posted by Giuseppe at 9:50 PM

I have just found a dark green blazer, much like yours, while thrifting.
It currently has those large, false wood buttons that are so common on sport coats.

Any suggestions for color/style of buttons to replace them? Thank you.

Definitelt brass buttons. The internet is full of sources. How about a monogrammed set?

And pirates stole it from headstones.

Love your blog. I worked for a nice men's store in the 1980's (in Rhode Island) and we sold lots of green blazers...and blue, and camel hair. Reading about your finds is a walk down memory lane! You have a good eye.

Big fan of your blog, Guiseppe, but as a Pittsburgher I've got to point out that the only things being stolen from the Pirates lately are bases.

Poor Pittsburgh. Those guys can't seem to catch a break... or a ball.

Love the green blazer. I'll leave out any description of how jealous I am.

Still not loving the socks, but I love how you work the unexpected into what you wear. (Though the argument could be made that the green blazer is enough unexpectedness for one outfit.)

Great tie. You can wear it with anything. I have the same tie in poplin by Brooks Brothers.

As for Anonymous and his green blazer (lucky guy!), you might consider silver-toned buttons, too. I like the ones that have been antiqued. They're less showy than the brass jobbies, and due to their slightly-out-of-the-ordinary status, make for a nice twist on a classic look.

I found a green blazer a few years ago and wear it much more than I thought I would. In the spring I have paired it with a pair of yellow-tan ("maize") pants and a maroon tie that has blue and green geometrics. Wonderful and always gets a compliment.

I just acquired Blackwatch pants this summer and have been saving them for the holiday party season. Maybe I'll pair them with the green blazer rather than the navy BB.

A quick question: what is it about tassels that American like so very much?

Good question. I get that one a lot from British folks. unfortunately, I don't really have a good answer.

Anyone else have any theories?

Great thrift finds. I'm soooo glad to have come across a male thrifting blog that is not run by a 23 year old hipster.

I'll answer your question with more:

What is it about butcher stripe shirts that Britons like so much?

Or how about, what is it about navy blue ties that Italians like so much? (about 70% of all ties sold in Italy are navy blue, I hear)

Or, what is it about navy blue suits that the Japanese like so much? (can't swing a cat in a business district in Japan without hitting half-a-dozen guys in navy blue suits--or so I hear)

I'd say the answer to these questions, and yours, is something like "national sartorial character."

Which is not to dismiss your question; it's an interesting one. It's just that there might not be more of an answer than this.