The relative nature of successful thrift shopping as it applies to price comparison may be something I've discussed before, but it's a subject that bears frequent reiteration. The following is a prime example.

This past Saturday, I made a pick up trip at the worthy Mr. Lee's tailor shop. Three pairs of pants, all second hand, of course. 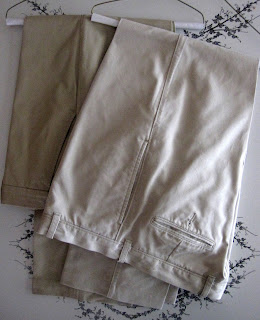 Two fresh pairs of khakis, one in a classic English tan shade and the other in it's paler cousin, frequently known as "stone". 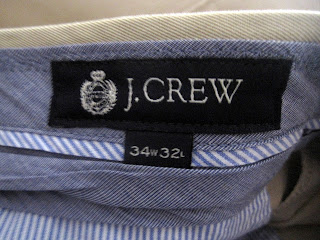 Both from J. Crew. One, a "dressier" pair of "Essential Chinos", 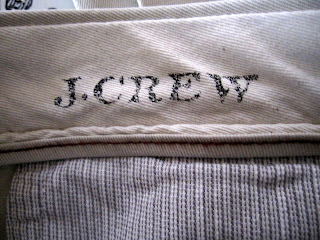 The other, from the more relaxed "broken in chino" line. Now, I know J. Crew is essentially mall junk from a sweatshop, but I'm tough on khakis. I run through them like water. As much as I'd love to support a company like Bill's, it'll be a cold day someplace before I spend $195 on cotton pants, no matter how nice they are. I find J. Crew khakis happen to be cut just how I like, and there isn't a thrift store on earth that doesn't have hundreds of them in stock at any given time. Besides, I know better than to pay $65 for them at the mall. Cut me a break, they're not Dockers after all. 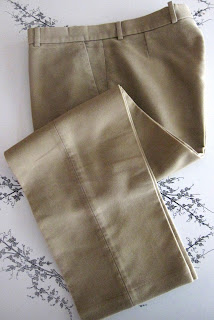 The third pair are a gem, though. Bulletproof moleskin, the real stuff. 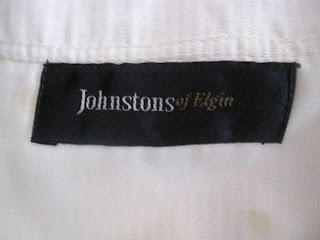 By Johnstons of Elgin, 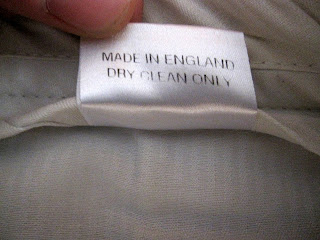 Made in England. I've already worn this pair two days running. Easily my new favorites. Warm as toast and hefty, yet indescribably soft, and cut with a military style high waist and dead straight leg. Excellent. Still available at the Johnstons website, a new pair will run you 75 GBP, or roughly $120. So lets talk relativity, and how two of these pairs of pants were effectively free.

Each pair of these pants cost $5.49. It cost $12 per pair for hemming, putting the total cost of each pair at $17.49. Admittedly, that's a steal for even a pair of J. Crew khakis, never mind the fact that these have also been tailored to my specifications. Or...

That math is convoluted as hell, to be sure, but why not?  It's this kind of relative thinking that helps me be so successful in the thrift stores. If you're going to pull off the crazy bargain hunting like I do, you've got to be willing to see potential and think creatively. And find yourself a good tailor, of course.
Posted by Giuseppe at 6:59 PM

Funny, I think the same way when I get a job lot of stuff at the thrift, in person or the net.

I would've called the Johnstons my "free" pair though

Now reduce your cost further by learning to hem trousers yourself.
Save your Mr. Lee for the tough to DIY jobs.

I'm not sure I understood the comment about dockers. Are you saying dockers are clearly a cut above jcrew chinos? If so, why? Not that I'm disagreeing, as I have no first-hand experience of either brand. If I ever do buy either brand's chinos, I'll have to buy them sight unseen using the Internet. So I'd definitely be interested in any details that raise one brand above the other. Thanks.

I'm saying Dockers are inexcusably bad. Avoid them at all costs.

How do those English trousers fit through the legs? I bought a pair of tweed trousers from tweed-jacket.com a while back and they are too narrow through the thigh, though they fit fine through the waist, and wonder whether narrow legs is characteristic of English style.

Close, but not uncomfortsble through thr thigh, with a fairly narrow leg opening. Pretty near perfect.

I'm sure you have probably posted about this before, an if so a link to said post would suffice for an answer, but what I really want to know is how does one go about finding a good taylor? Good help is always so hard to find!

The Queen of Fifty Cents said...

Your math makes sense to me. After all, my personal monetary unit by which I measure all purchases is the twenty-five cent cashmere sweater!

About J. Crew: "there isn't a thrift store on earth that doesn't have hundreds of them in stock at any given time." I beg to differ. I've been through every thrift shop in my city (Syracuse NY) and the clothes are almost universally ugly and threadbare, stuff that should have gone in the trash (not because it isn't stylish, but because its just plain beat). A pair of J. Crew khakis would be considered quite the score in these parts. The best I've been able to do is a few LL Bean flannel shirts.

I'll have to hit the thrift stores the next time I'm in New England and see if I can do better.