Writing a blog that is ostensibly about clothing, it can be easy after a time so slip into outlandish subject matter. I know I'm far from innocent of this. Let's for a moment take a step back and cover the basics. Though I may own more than my fair share of bold jackets and pants so colorful as to border on the downright silly, there are some things which are essential. 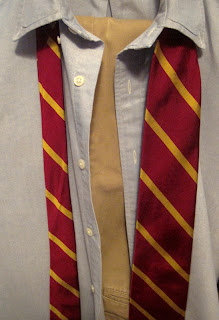 A blue button down oxford shirt (in this case Ralph Lauren, $2.99), a simple 3 inch wide bar stripe tie (Talbot's, $1.00) and a lightly starched pair of classic flat front khakis (L.L.Bean, $5.49) is a combination that's hard to beat, at least in the United States. And the versatility of these items, whether as a combination or separately, is endless.

If you're like me, and you enjoy dressing well, but your life far from requires it, this whole combination makes a great complete outfit any day. You'll feel dressed, but also comfortable, and really, this is pretty casual stuff. For a crisp look finish with penny loafers and a brown leather belt. Or turn things down a notch with a ribbon belt and Blucher moccasins (as I did today). On a chilly day, a cotton or wool v-neck, cardigan or cable knit sweater in navy, cream or even hunter green provides warmth, looks finished, and doesn't overdo things too much. I opted for a cream cotton cable knit, myself.

Should you require a dressier look, just put on a single breasted navy blazer with brass buttons. In Winter, a herringbone tweed in grey or brown works just as well. Dressier still, simply swap the khakis for charcoal grey slacks in flannel or worsted.

If you require a fully comfortable look, just ditch the tie...or keep the tie and wear jeans...or wear the whole rig with no socks and boat shoes. Throw a Barbour over the whole thing, or if you're young and hip, a jean jacket. Swap in a knit tie or a bow tie sometimes, or some argyle or brightly colored socks. Don't iron any of it, put your bare foot in some natural canvas sneakers, don a ball cap and head to the seaside for an ice cream. Wear the shirt, starched and pressed, with the tie under a navy suit to a job interview. The list goes on and on. Just don't wear it to a funeral.

I get a lot of emails from guys looking to up the ante on the way they dress, who have little money and feel, rightly so, exasperated by the daunting task of building a proper wardrobe. It's a plight I understand completely, being eternally broke myself. A guy doesn't really need a lot of clothes, just the right clothes, at least at first. Once you get bitten by the bug and have your basics covered, then you can fill your closet with fopperies. But a guy could do worse than owning a bunch of good khakis, blue, white, and blue and white striped shirts, quality basic ties, and shiny brown shoes. Throw in a navy blazer, a good dark suit, some sweaters and one really nice piece of tweed and you're well on the way. Once you become comfortable with these basics and the way they work for you, the rest has a way of falling into place.

And yeah, it's all been said before by better men than me repeatedly for more than half a century now, There's a good reason for that, you know.
Posted by Giuseppe at 9:15 PM

Well said. This would be a much more beautiful world if more men had your sensibilities (which I basically share) for what constitutes casual.

My only quibble is, if I'm not mistaken, that tie is a ribbon stripe. I believe bar stripes are stripes of equal widths.

I think pink and pink and white striped shirts belong with the basics, as pink usually goes better with tweeds (at least the ones in my wardrobe)than blue. But other than that, spot on. And yes, mutatis mutandis, it works very well here in England too.

The prices you list in this post seem about 1/10th the price that one can actually find for the items you list. Even using specialised search tools like Froogle, I can't find anything close to those prices for similar articles, let alone for the specific articles you show and discuss.

If this is just a typing accident, please say so.

If this isn't a typing error, please educate the rest of us on how, when, and where one can purchase those items at those prices -- and please do the same in future posts if the pricing is visibly below "market retail" pricing.

I adore that tie! I've been looking for a "cardinal and gold" striped tie off and on for a while now, in order to rep my alma mater.

Anonymous,
It's all about chaotic thrift shops and unending persistence.

Those are the prices I paid, not typos.

Giuseppe, I have to say that I agree completely. A good wardrobe starts with the very basics and builds from there. Khakis, button-downs, and striped ties are staples that can be dressed up or down as necessary. I love my french cuffs and my polos, but neither is as necessary or versatile as the good'ol OCBD. Ditto with the khakis.

I'm a poor college student and I can attest to the versatility, reliability, and low cost of this method. The result is that I probably spend more time and less money on clothing than my peers.

well said! I have been loving your posts on the winter-spring transition (it helps define the difference for those of us who don't really know), but the back-to-basics posts are always welcome, even just as a reminder.

Those prices were paid for used clothing from thrift shops, not new clothing bought from the companies who make them.

If you buy stuff used, it is significantly cheaper, although Giuseppe is in a league of his own when it comes to thrifting.

Great breakdown, G. This is pretty much my "uniform" most days of the week. Although I do need some more rep ties. I been rotating critter ties and plaid wool ties. I hope there will be a good selection of reps at the TSF.

This is exactly the sort of post I've been wanting to read, and has the information I need. Thanks, and keep it up!

My only problem with a blue shirt and khaki dockers is that there are a number of restaurants where this is the uniform.

Once I wore this basic combo to a restaurant and was embarrassed to find I was mistaken for a waiter.

A lot of great ideas here - I love the suggestions and how they illustrate how versatile the staples are.