A warm day followed by a chilly night, as I sit on the fence about whether to stash the heavy togs and pull out the lightweights. In the past, I've been known to jump the gun, and I wind up with a closet full of seersucker while I go digging around to pull out the wool I find I still need. September will no doubt find me digging out tennis shirts while I ignore the tweed I've prematurely filled my rotation with. This year, I've decided instead to give it my best shot at the schizo combinations of warm and cold weather gear. We'll see how this works out. Good thing I'm not afraid of outlandishness and an incurable attention hog. 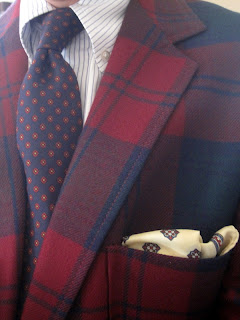 This tartan wool jacket, worn sparingly to begin with, was given it's last run of the season. The generous gift of a long distance friend with less of a proclivity for that much big plaid at once, it hails from a tailor shop in London. The last time I wore it was on Christmas Eve with a thick white turtleneck sweater and some heavy flannels. Plaid jackets aren't for everyone, and I could give sound advice by telling you that the trick is to keep the rest of your outfit subdued. Of course, I opted instead to pair it with three other patterns. Mock me if you will, but the beauty of dressing for your own sake and not out of requirement is the freedom to do this sort of thing if the mood strikes you. Perhaps it would be best if the mood struck me less, but, what are you gonna do? Never mind, we aren't likely to see this jacket again for a good six months. 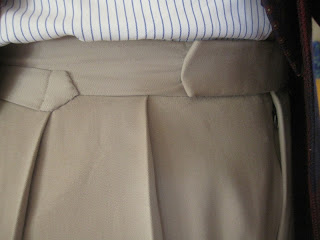 Seeing their first run of the season is this pair of gabardine pants by Ralph Purple Label.  Gabardine, traditionally a warm weather fabric, with wool tartan.Talk about schizo. To boot, not only are the pants pleated with side tabs, but the jacket has structured shoulders, darts and side vents...all paired with a button Brooks Brothers shirt and tassel loafers. Egads, will the affronts never end?!? 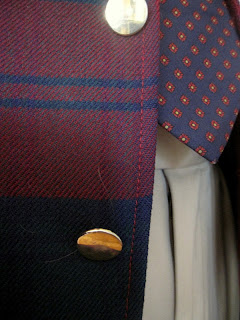 To make matters worse, it's even got brass buttons. I'll agree the that realm of brass buttoned blazers is best left to navy blue, and occasionally hunter green...and even less occasionally to giant tartan. 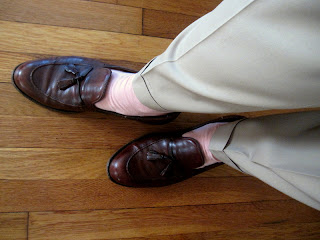 Oh, and remember those pink socks I was so proud to have eschewed in the name of good taste only a few days ago? Here, they drive the final nail deep in the sartorial coffin. Never half step, 'cause I'm not a half stepper. If you're gonna get crazy. best play it to the hilt.
Posted by Giuseppe at 9:21 PM

You get mad props for referencing the Tribe. That song was the jam (and still is).

At least the pleats appear to be facing the right way....

You, sir, have got some big ones.

An advantage to being single: "out of storage" means "that pile over there"

Killer. You knocked it out of the park—again.

You're definitely giving ADG a run for his money on the fuzziness factor. I think you accessorized this outfit perfectly; the pink socks are the icing on the cake.

But I still wish I could have turned that jacket into a vest.

Socks, Tin Tin. It's all about the socks.

Tie by Rivetz of Boston.

A nice outfit including that bold jacket I could never pull off.