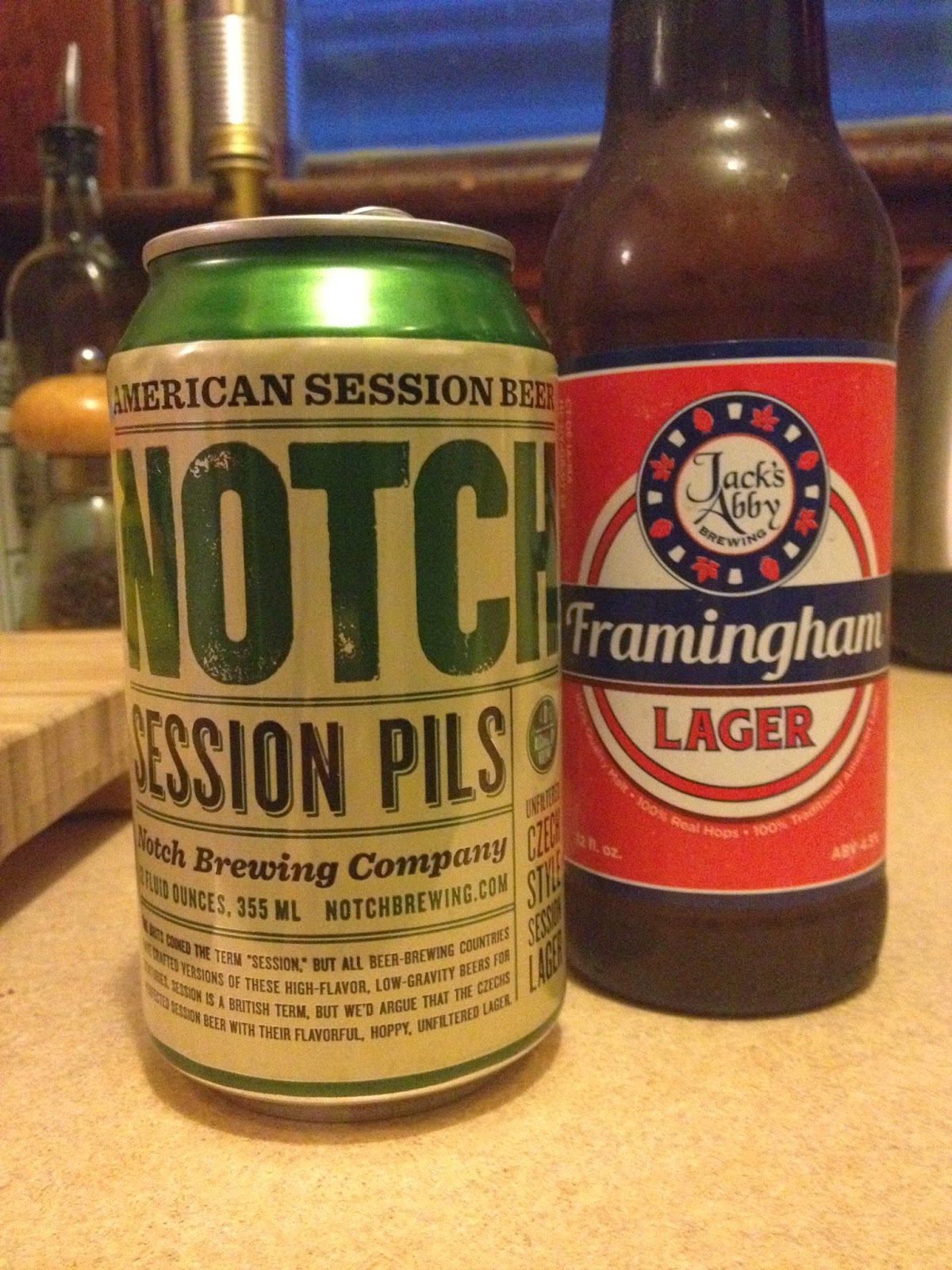 I appreciate a really good beer. A rich malty stout on a cold Winter's day; an ethereal wild fermented Belgian sour with a beautiful meal; a big and unusual new style American micro-brew shared with good company; these are all good things. But everything has it's time and place, and when the hot humid Summer reaches full pitch, nothing satisfies quite like an ice cold, easy drinking, low alcohol "regular beer." Every year around this time I revert without compunction or regret to keeping my refrigerator stocked with plenty of such beer, usually canned. Schlitz was my old favorite, but in recent years it's been Miller High Life. This Summer, however, a few good local breweries have stepped up to the plate, and for the first time "regular" beer and "good" beer are actually the same thing.

Notch Brewing started in Everett Massachusetts just a few years ago. Brewer Chris Loring set himself apart from the crowd early on by proudly reviving largely ignored (by Americans at least) European styles of beer and brewing them in thirst quenching, low alcohol versions. After so many years of intensely flavored beers buried in extremely high levels of alcohol, he proudly rolled out a line of delicious beers all clocking it at less than 5% alcohol by volume. Notch Session Pils is just such a beer, a traditional Czech style pilsner. Light, clean, lightly hoppy and bone dry, it stands as a testament to what refreshing pilsner really should be. Easily drinkable straight from the can, this is the beer that convinced me not to drop back to American "macro beer" this Summer.

Jack's Abby of Framingham Massachusetts creates interesting beers that have their basis in the brewing traditions of Germany, but with a distinctly American flair. I'm not usually one for "classics with a twist", but Jack's Abby knows how to achieve balance, consistently putting their own stamp on  classic lager styles without losing sight of history. This Summer, as part of a benefit for the town of Framingham, they've introduced Framingham Lager. Essentially, this is the regular American beer, not a take on a German style, but rather a vastly improved version of whichever crummy beer you grew up drinking. Again, easily drinkable straight form the bottle out on the porch, it's also light and dry, just barely hoppy, and with a refreshing "dusty" quality. In fact, I imagine that this beer probably tastes a lot like Schlitz might have tasted in Milwaukee in the 1930s. Bonus points for the simple red white and blue label. A case of these and a bottle of Bully Boy Whiskey (more on that later) beats a case of Bud and a bottle of Jack any day, even if they are kind of the same thing.

No oily, citrusy hops, no intense body and high alcohol, no added fruit, nothing. Just an honest renaissance for regular beer. Oddly enough, in poking around the internet to see what others had to say about these beers, I was met with mostly mediocre reviews. Chalk that up to our collective need for everything to be a "thing" I guess. I find the directness and simplicity of these beers to be a welcome breath of fresh air in world full of exhausted taste buds. If you live around New England, seek these out. If not, be jealous of those of us that do. The Americans finally get it right.

All I can say is amen...icey cold crisp Miller or preferably Straubs or Yeungling on a hot humid night....

I never liked Narraganset (fabled "regular beer" from Rhode Island), but I've become a huge fan of Narraganset's Summer Ale, in the bright blue can.

despite the company's questionable (in my mind anyway)political posture and it's appearance on other #menswear sites with less integrity than yours, I've got to say that I really enjoy the hell out of an ice cold Coor's original variety.

I have left a lot of blood, sweat and tears in Framingham, so I am definitely going to give that one a go.

We are truly living in a golden age of brewing. Fine tradition of brewing has been saved in the last 20ish years, and new ground being broken (perhaps just being rediscovered.) And yes, summer demands a "regular beer". Here in the Mitten, Stroh's was grandad's beer, and Third Coast beer is mine.