I used to be a drummer. Actually, I guess I still am, but I just don't get the chance to do it much anymore, what with children and school and all. Tonight I'm getting together with old friend (and sometimes commenter) Pasquale to lay down some jazz....on this beautiful old thing: 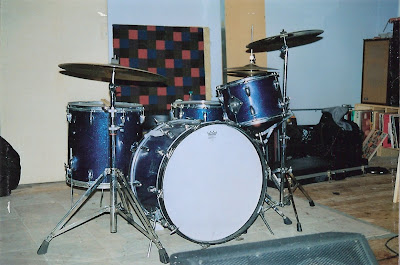 This drum set is possibly the greatest thing I own. As you may well have already guessed, it too was acquired at a criminally low price by an unusual set of circumstances. Clothing is far from the only thing to be found on the cheap for the tenacious and creative shopper.

I started playing the drums when I was in the sixth grade, about 11 or 12 years old. After about a year of taking lessons with only a snare drum to prove I was serious, my parents bought me a second hand drum set. It was a basic level Gretsch from the 1980's that they found for $200. Nothing to write home about, but certainly a decent set of drums. I immediately stopped practicing my lessons and began to teach myself every song on my Dad's Beatles albums by ear.

Fast forward 15 years. I'm playing in a gigging band, the fourth or fifth serious one I've been in, on the same drum set. By now I'm pretty damn good and deserving of a better instrument on which to practice my craft. Ebay and the like are loaded with vintage drum sets, with vintage price tags of a couple grand or more. I call it "drum porn"; I know I can't afford them, but I keep tracking these things down just the same. Then one day I come across a cryptic ad on good old craigslist, which says something like "old Slingerland drums $325". I sent an email, expecting for that price some junk form the 90's. What I get is an email from an angst-ridden teenage goth girl in the suburbs, saying "they're kinda old and crappy, you probably don't want them" with a number if pictures of the above beauty attached. I nearly passed out.

Four days later, I'm at her house in a certain exclusive suburb of Boston, with Pasquale and a pick up truck, $350 in hand. The young girl says she promised to hold them for some lady from Rhode Island who's coming in two days, so I offered her the $350, $25 above the asking price, and practically ran out the door with the drums. Her Mom seemed awfully glad to have those damn things out of the house. Her Dad, I suspect, was getting toasted on single malt Scotch while reading the paper in the study. 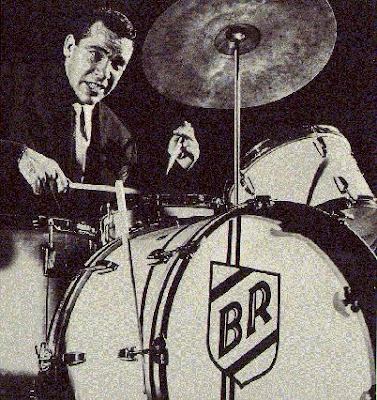 The last time I played was at Pasquale's wedding at the end of August (where, incidentally, we played "I Should Have Known Better", one of the very Beatles songs I taught myself all those years ago.) It'll be good to see my old girl again tonight. Next Tuesday, I'll be sitting in with Pasquale and an as yet undetermined horn player for a cocktail gig at the Boston Athenaeum...we'll see how that goes.
Posted by Giuseppe at 12:38 PM

In music groups there is always a patsy, a butt, a fall guy, the one on who's head all the jokes are heaped.

In Jazz, it's the banjo player
In orchestral music, it's the viola player.
In Rock, it's the drummer.
Typical joke.
Q; How do you know the drummer's at the studio door?
A; The knocking is speeding up.

Two guys at a party are stuck for conversation. One of says to the other "Hey, I did an online IQ test today. Came out 212!"
The other guy says "That's amazing! My IQ is 212! What do you do for a living?"
The first guy replies that he's a nuclear scientist and the two of them start talking loudly about atomic physics. Behind them two other guys overhear.
"Quite the coincidence" says the first guy. "Tell me, what's your IQ?" "157" replies the next guy. "Jings!" Mine is 155!" what do you do for a livin'?" " I'm a heart surgeon" says the second guy. "Jings! Me Too!" and these two guys start talking about surgical technique.
Behind them sit two fat men in stained sweats. "Quite the coincidence that," says the first slob.
"Yes says the second slob.
"What's your IQ?"
"6" is the reply.
"Amazing! Mine's 7! What kind of sticks do you use...?"

I enjoy listening to jazz drums. They look great.

That was my dream drum-set...I played up until 7th grade which would have been around 1972. I well remember that blue sparkle color scheme.

I was saw a headline in a newspaper that said "Three Musicians and a Drummer Die in Plain Crash." True story.

Even in death, a drummer can't get no respect.

Maybe there's something to those jokes after all.

I had no idea that the athenaeum had music nights. Sounds like a fun place to play.

They don't. It's more of a cocktail mixture for new members, the future generation of stuffy old Bostonians. We did this gig once before and they found us totally offensive.

It is a fun gig to play though, free drinks and horrified members of the social gentry, and a good excuse to wear nice clothes.

I was a Roger's man. Red metal flake. My heart wasn't in it - - at practice I liked to turn the snare stand into a machine gun.

The kit I played just bfore this one was a 1962 Rogers in white marine pearl.

It wasn't mine, I just sort of borrowed it for three years.

I had a lovely Ludwig, White Marine Pearl, from the late 50's. It was essentially a jazz set, and I a ROCK drummer...I sold it out of respect for it, to a jazz drummer...

That's brilliant!
I wish I could witness the offensiveness in person :)

I played plenty of heavy handed psychedlic freakout on the kit with size 2B sticks. That kit can take anything.