Despite messy, wet, wind driven fat flakes of snow, today I donned the full business professional get-up and trudged on down to Joe Banks for a job interview:

I dare you not to take me seriously in an outfit like this. 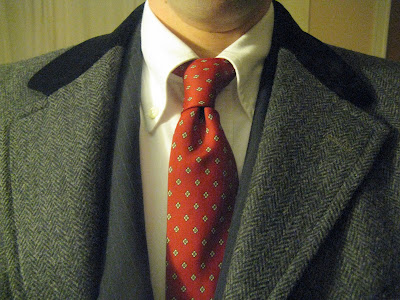 So Mrs. G took part of a day off to come home and watch the boy, and through no small effort I made my way down to the "Financial District" as its know. As I got out of the subway, I checked the time. 10 minutes early, perfect. So, brimming with rare confidence I strode through the door and annouced my arrival. "I have an appointment with (x) at 3:30"

The woman behind the couter looked up and said "Oh yes. (x) is not here. He told me to call and let you know, but I lost your phone number. Sorry."

Well, at least she apologized. That's something these days, I guess.

Since I was already downtown in my business best, I decided to pop in to Brooks Brothers across the street and pick up an application. The fellas there were more than happy to chat, but had nothing but grim news about the currect state of business.

Then I went up the street to the Allen Edmonds store and picked up an application. The fella there was more than happy to chat, but had nothing but grim news about the state of business.

On the way to Downtown Crossing, I passed Thomas Pink. They actually had a help wanted sign in the window (who does that anymore?) So I got an application there.

On the way home I stopped by the Andover Shop, where I had an enjoyable conversation with the old guys about the old days, and our mutual dismay over the current state of acceptable dress. Then they gave me some grim news about the state of business.

Next I went to J.Press. The fella there remembered me. He said he kept my resume and really wanted to hire me, but because of grim news about the state of business, there was just no need of an enthusiastic young fella such as yours truly.

The outlook in the architecture world lately says it will be at least a year or two before most firms will be able to expand again, because of grim news about the state of construction.

Sheesh, a guy just can't catch a break in this town! Maybe I should just drink whiskey under a bridge somewhere and write blues music.

Your experience so far has been classic Jos. A. Bank! I'm sorry to say...

Sorry to hear about the non-interview. Had similar things happen to me before. I know it doesn't feel like it right now, but those things happen for a reason and it will get better.

Dear G,
please do not give it up. It says a lot of the grim state of business if they can not hire an absolute expert like yourself.

Maybe you should turn your blog into a book. Something like Bernhard´s Roetzels Gentleman for the normal type of Joe who doens´t shop like the Prince of Wales due to a missing allowance by inherited wealth

I would certainly dig your book and promote it here in Germany...
or you could style consult although you thankfully haven´t to much in common with ASW and the likes.

So keep it up
Nils from Berlin

"The woman behind the counter looked up and said 'Oh yes. (x) is not here. He told me to call and let you know, but I lost your phone number. Sorry.'"

Apparently the U.S. is suffering from much more than a financial crisis!

What would you wear for lying under a bridge? Hmmm...I was going to suggest a white t-shirt and work pants, but then remembered that all the old blues singers wore snazzy suits with loud shoes. I would recommend that combo.

I can't believe how that woman treated you! If you don't get the job, you should let the management know.

You looked wonderful. I hope something pans out.

I'm more upset with the management than I am with her. In all my years of retail management, I never would have delegated a phone call like that to a member of the floor staff. I'd have made the call myself. True, she was the one who lost my phone number, but she shouldn't have been responsible for it in the first place.

I will call them back today, but to be honest the bad taste is already in my mouth.

Man I hope you get a job with Press or Brooks so we can read some behind the scenes process. You may have to go anonymous then though.

First off, that's a fantastic coat! Sorry to hear about your experience at JAB. I think Brooks, Press, or AE might provide a better overall experience anyway.

It would be hilarious if you got a gig at Thomas Pink. I don't think I can picture you wearing a shirt with super bright stripes..

I'm sorry that you didn't get the opportunity to be interviewed.

I hope Pink's hire you. I'm partial to their ladies tailored shirts and their menswear is none too shabby either.

There is a hiring freeze at every retailer in the country. If you can pull this off, a huge congrats would be in order. If not, I wouldn't take it too hard. People these days are happy just to keep their jobs WITHOUT benefits. Best of luck to you. I'll be watching to see what happens.