"Don't use the rules.
They're not for you, they're for the fools.
And you're a fool if ya don't know that...."
the Clash
While it may seem more than a bit odd for a guy in a suit to carry on about breaking the rules, I beg you to bear with me. I think I might have a point.

Traditional American menswear is rife with rules and regulations, and yet it seems that foremost among those rules is an artful disregard for all of those rules...within reason, of course. With old Ma Nature breaking the law and giving us a humid 90 degrees in late April, I opted for a suit, worn with enough minor infractions to send the more fastidious among us to the padded room.

The recently acquired Brooks Brothers tropical wool tan suit. Maybe it's too early for a tan suit, but I don't care. It was hot and sunny today. And besides, this one's wool, not cotton, so I'm pretty sure they'll grant me a zoning variance on this one. 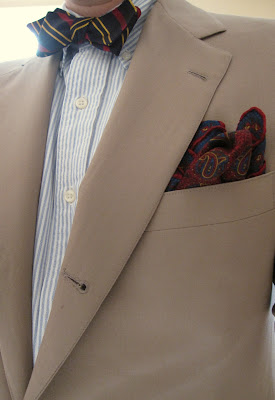 Worn with a bow tie and a blue university stripe button down. I have a pretty good feeling that it's a no-no to wear a university stripe with a suit, but I think it gave this outfit a nice hint of a casual vibe...not a bad thing when everyone else is wearing toddler clothes. 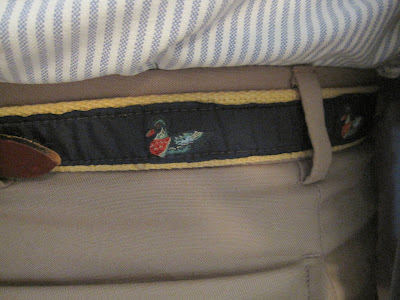 Add a surcingle belts with embroidered ducks on it. Most certainly not a suit-appropriate accessory, but who cares? Casual vibe and all that, remember? 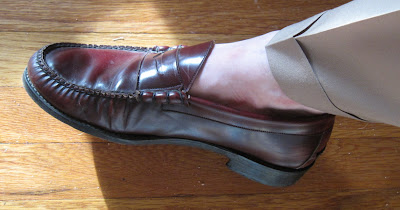 American men are generally taught to embrace a rigid conformity in all forms of dress, be it business or casual. Every guy wears a blue suit with a white shirt, every guy wears jeans and a ball cap on Saturday. It's too bad, really. A man shouldn't be discouraged from trusting his instincts and showing a little flair and personality, when he can get away with it.

Just because you're wearing a suit and other traditional items doesn't mean you have to be a stiff. It can in fact be a vehicle for your own individual personality.

While your outfit overall looks okay, I think the surcingle belt, the striped button down, and the penny loafers sans socks are far too casual for a suit. If you want to dress casual and look nice, don't wear a suit.

These accessories are nice, but I think they are far more appropriate to an odd jacket plus trousers combo (such as navy blazer and khakis, half of which you're sort of already wearing).

Not following rules always allows someone like yourself look exceptional! The suit is fantastic.

This is just great. I am so glad there are terrific people like you out in the world trying to turn this pathetically dressed nation upside-down. I'm 23 and with blogs like yours and the Satorialist's my friend and I are the glaring exception to the "toddler clothes" wearing, lazy "comfort clothing" schmucks that inhabit my small rural community. Do we fit in? No. Do I care? NO! I really appreciate your effort you put into this Blog; it has become my morning stop before I face the world in my salvation army Christian Dior silk blazer.

I casually follow your blog in my RSS, and I think that this is probably my favorite from the past several weeks. Nice work, individuality goes a long way.

Great post, par usual, but you don't have to apologize for the way you dress. I know this blog is about "dressing like grown men", but just because you're a Dad doesn't mean you can't make your own rules and dress how you damn well please.

You're wearing a jacket, shirt, and tie, if you can check those off then you're [sadly] set for the modern professional world. I guarantee that you still look 10x more "dressed up" than 95% of the guys in town. That's coming from a fellow Bostonian (who has been in Hong Kong too long).

I'll come out in favor of the surcingle belt (I wear one with my seersucker almost exclusively) and the shirt---but I have to draw the line at socks. But maybe that's just my personal idiosyncrasies, regarding shoes worn with socks as an important component of being civilized everywhere but on a beach.

This is one of my favorite looks so far. I dig every detail and the overall effect they achieve together. It is inspiring.

I think that "toddler" wear is no worse than off the rack, department store conservative. They both demonstrate a lack of style.

In design, as well as in dress, true artistic expression is demonstrated when the artist intentionally breaks rules, not when he is either oblivious to them or stringently adhering to them.

I think clothing should make a statement, especially when that statement is along the lines of "eat your hear out" or "you can't buy this style, sucka"

You quote The only band that matters while wearing a suit, and that my friend is why I read this every day. By the way, I went sockless in a suit today as well...

Not only your postings, but the comments on your blog help one to feel that there is still hope for civilization!

Your effort reflects thoughtful intention that no one should hold against you -- whether they would wear these things in this way or not. And your blog set me to thinking a little more broadly about the subject -- and I truly appreciate that.

If the debate is framed as a decision between what you would wear and what others say you can wear, the discussion is perhaps a false dichotomy you can reject. I suspect there is reason to validate both standards (and a lot of others?).

I wonder if our opinions concerning the appropriateness of our dress can change (given place, circumstances, distance in time --"I can't believe I used to wear that..."). I.e., we might adopt the standard of response to the clothing (what others say), or we might consider the matter from personal satisfaction (comfort, challenge, etc); they are not necessarily contradictory opinions (one social, another personal).

I wore pennies sans socks yesterday, and an elder teased me in the middle of a meeting about it. So I threw on the most ridiculous electric blue, light gray, white and canary yellow argyles today, which I shall proudly parade before him and anyone else who attends my study tonight.

I like the look. Wish I owned a suit like that. I think I need to take a trip to Boston to thrift.

One of your strongest posts yet! Great.

Your personal style is all over that rig my man...and you can't buy that, even with unlimited funds.

Interestingly enough, your nemesis recently posted a photo of an Italian going sockless in a suit. Commenters pointed out that sockless with dark pants didn't work, and many found the concept of sockless with a suit to be beyond the pale.

Having said that, sockless with a light-colored suit might be OK. I think that a university-striped shirt with a less formal suit (such as your tan suit) can work, and I find this combination works.

For me personally, I think you bent/broke one rule too many. I would have either worn socks or worn a leather belt (I'm speaking in hypotheticals here, as I never go sockless because my feet sweat too much). Still, it's a great outfit, and I think you pulled it off.

I'm looking forward to getting more inspiration from your great outfits.

Is it the university stripe pattern that's supposed to be no-no with a suit? Or it the fact that it's OCBD? If the latter, I get it. But if it's the pattern, what's the rationale for that not being OK with a suit?

As I have taken the week to enjoy other blogs, I have really enjoyed yours. I think it is great to have rules for no other reason but to break them. The Duke did it without hesitation, and I like your outfit very much. The belt, loafers, oxford cloth button down, and no socks with a suit are all sartorial sins. And not only did you break one rule, you broke them all. To that, I say well done! A beautiful look, and cheers to a great blogger. I really envy your ability to pick up great clothing at thrift stores. Unfortunately, ours are not so well stocked, but again, I applaud you.

Great blog, great post. I recently bought a cotton khaki suit and I plan on wearing it all summer. Bow tie, pocket square, sockless, check. I will wear a leather belt, though, and skip the OCBD (too hot for summer). However you pull it all together with aplomb.

Thanks one and all for the votes of confidence. You'd almost think I started this blog as a way of fishing for compliments (or something)

I've always felt that university stripes were most at home with blazers or tweed jackets. Somehow they seem a bit too 'un-dressy' for a suit. Not so much a hard and fats rule, just a feeling I always had.

Still, you have to know the rules, and be able to follow them when the need arises, to be able to bend or break them with style--as Giuseppe has (again).

I like the cut of this suit.Was it thrift". I like the belt and shirt plus shoes .Where can you get good Penny Tassel loafers?

I went to a wedding and wore a suit and went sockless in my dress shoes. Man, this is way more cooler than wearing socks. I plan to make this more regular summertime attire. If your feet do not sweat much like mine, it feels much better not wearing socks. Thanks!

I think the sockless loafers top off the outfit in a fantastic way!
I'm inspired!
Bravo.

I find that tan Dockers pants from the 1990's or brown A&F shorts with black loafers sans socks worlds well. Black or brown loafers work with light pant colors as well. That really worked well with tan and brown. The brown penny loafers didn't clash with the lighter brown color. Bravo for such boldness to push conventions and prove them overrated!