Even though Mother Nature has decided to hold Boston in the grip of a windy and wet Spring, with temperatures striving toward a scant 40 degrees, I am looking forward to warmer and sunnier days...and with them a different heap of clothes in the closet.

To that end, a few new pieces have recently gained membership to the Affordable Wardrobe...at the usual impossibly cheap prices. 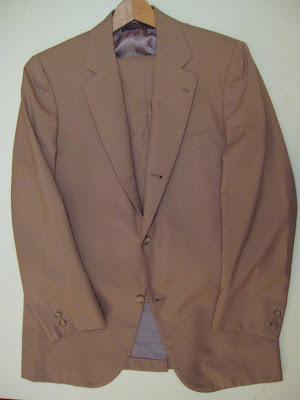 A tan sack suit in lightweight wool. Note the two button cuff and 3/2 button stance, from none other than: 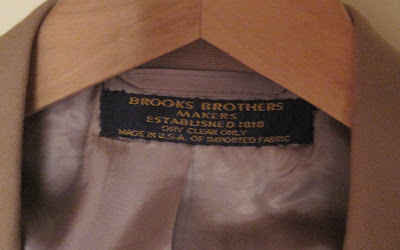 good old (as in good because its old) Brooks Brothers. $9.99. A perfect fit, in need of nothing more than cleaning and pressing. A friend of mine is getting married on in the daytime on Memorial Day weekend. I think I just found a suit to wear.

These old Brooks Bothers suits were the best. The three quarter lining makes them very comfortable, and I find their take on the sack cut jacket to be slightly loose fitting without being frumpy. In fact, I've trained my eye to hone in on the 2 button cuff when sizing up a rack of suits at a thrift store. Too bad they don't make them anymore, but I suppose that's what we have J.Press for. I actually found a J.Press poplin sack (with an incongruous 4 button cuff) in my size at the same store, but it had a big stain on the shoulder, so I took a pass.

I also found a very nice pair of medium grey pants in a lightweight wool, for $3.99. 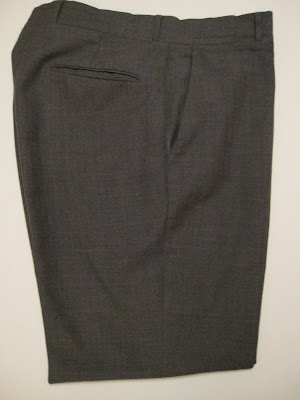 This is something I've actually been hunting down for a while. Thrift shopping is fun because you never know what you might turn up,but it can be frustrating when you actually need something. In menswear, the basics, like these grey pants, are the hardest thing to find. Why? Because most men will wear their stuff until it's trash, and then throw it away (or the wife will), so there's often not much of it in good second hand condition. It's the same reason you see so many suit jackets with the pants missing in these places. A guy goes to work, takes of his jacket, then carries it to the car and drives home. The pants get wrecked and the jacket, like new, gets donated. I never buy the top half of a suit, that's chump stuff.

These pants are from the Harvard Cooperative Society, or "the Coop". (that pronounced the same as in Cooper, not 'co-op').

I have some vague memories of the old Coop. The first two floors were the bookstore, a really great place, where all the textbooks for Harvard were sold, in addition to a lot of other cool stuff. Above that was the men's shop, which sold sack suit, striped ties, Harvard scarves and sweaters, penny loafers, the whole nine. In back at the annex, was the music department and all the Harvard souvenir junk, sweatshirts and coffee mugs. Now, the men's department is gone, and the bookstore has become a Barnes & Noble with a Starbuck's in it...yet a sign outside still calls it "The Historic Harvard Coop". Kinda like all those stores called "Filene's Basement" that aren't in basements and don't have 6 floors of Filene's above them. Go figure.

Also acquired, not pictured: a pair of Brooks Brothers 'Hudson' chinos in brown, $5.99; a pair of J.Crew chinos (can't have too many of those), $4.99; and really cool Rooster necktie in real Indian madras, square cut at the bottom, $3.99.

Right now, the thrifts have a lot eighties vintage traditional stuff, if you can find it. I wonder what I'll do ten years from now when they're all full of sweatshop junk from the nineties. Better get me a real job and start forging a relationship with the boys at J.Press and Andover Shop, quick!

p.s. In browsing the Brooks Brothers website to find the link for the Hudson chinos, I came across this photo where the model is wearing both buttons closed on his two button jacket. For shame! Can it be the truth?

That suit is a nice score! I'm not sure it's the best thing for a wedding, though you will probably look better than just about anyone else there.

Unlike you, I do not have fabulous thrift stores to cater to my sartorial desires, and what little I find almost never fits. The best I've found so far is a $10 blue-on-blue tiny houndstooth odd jacket. Pros: cheap; made in England; great colors for me. Cons: stained (removed by the cleaners); broken buttons (easily replaced); needs serious alterations (but fits in the shoulders).

Still, I manage to get bargains: last week, I bought a $550 suit that had been marked down 50%, then another %50. With a $10-off coupon, it cost $138 (including tax). Not bad for a brand-new designer (Joseph Abboud) suit. Next task: scrape together the dough for alterations (the clerk recommended against their in-store service).

As long as they don't start showing photos with just the bottom bottom done, as men around here are wont to do.

How you are able to find incredible items amazes me.

I suppose that I'm working my way up there-I did find a striped Brooks Brothers bow-tie here in Toronto last week!

"...slightly loose fitting without being frumpy."

(Just as you could never look
like a caricature of a mafioso in a tight-fitting one).

"Owners of capital will stimulate the working class to buy more and more of expensive goods, houses and technology, pushing them to take more and more expensive credits, until their debt becomes unbearable. The unpaid debt will lead to bankruptcy of banks, which will have to be nationalised, and the State will have to take the road which will eventually lead to communism."

T'would be a charity hope what you saw was a photo of a BB hacking jacket.

Here's a question- I've noticed your suits and odd jackets to be 2 button or 3/2. Is that personal/style preference, just what's to be found, or what?

3/2 is my favorite, followed by 2 button. I do like a 6/2 double breasted, but only occasionally. I'm not a big fan of a "hard" 3 button, and have been known to press vintage three buttons into 3/2. I'm also fairly hard-lined on plain front pants, though I have been known to make exceptions.

As for the both-buttons-buttoned look, your nemesis pointed out that JFK favored jackets "cut in the paddock model." A paddock model jacket is meant to be worn with both buttons buttoned; this is possible because they are in a different location than on a standard two-button suit.

Somehow, I doubt the model in the picture you linked is wearing a paddock style jacket (the top button is too low, for one).